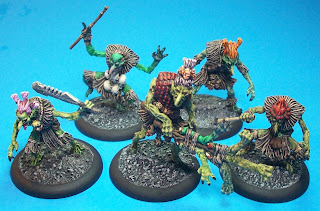 Showcasing a warband of Mortal Arrow's Tikki Troll miniatures, painted on commission for  a customer.  These figures were funded via Kickstarter a while back and are on sale here:
https://www.mortalarrow.com/bazaar/mortal-arrow-miniatures/
The models are very modular with a mix of extra arms, heads, and add-on bits, and as far as I can tell any of the parts will work on any of the bodies (which come in a torso-and-legs single piece casting).  They're very cleanly cast and come with 40mm bases.  All are quite large, with the shortest pose around 40mm tall and the Big Kahuna about 60mm.
The customer's brief was to do them up as group of troll shamans and witch doctors, so I tried to avoid using too many melee weapons in favor of more "spellcaster-ish" builds.  The exception is the "runt" with the club, who was actually purchased off of ebay before the rest of commission was established.  All in all I think they came out quite well, and the sculpts have a ton of old-school D&D flavor to them.  A fun job. 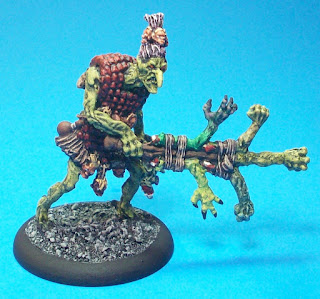 The Big Kahuna is probably my favorite of the range, in part because of that crazy club made out of severed (but still fighting) troll arms.  I figure this guy is the head shaman of the group and his weapon doubles as a beatstick and a crude but powerful magical staff - perhaps the individual limbs can each cast a different spell each day or something.  I've deliberately painted each attached arm to match the skin tone of a different member of the group.  Donating a limb to the boss is part of the initiation ritual to join up, because trolls are just like that. 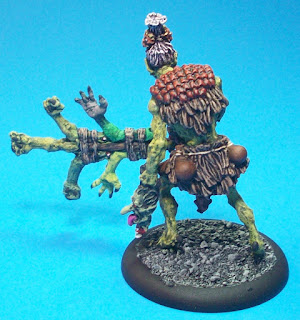 He also carries a severed troll head in his off hand, which we can say is his "familiar" and the noggin of the former chief shaman.  In pinch it also makes a dandy thrown weapon.  He's also got a couple of potion bottles on his belt and a smattering of shrunken heads as trophies. 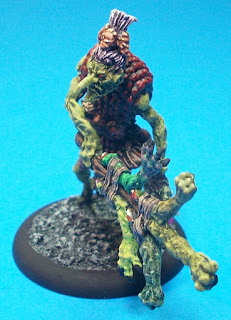 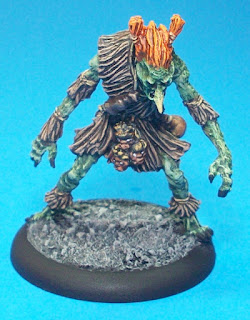 This big brute is the second in command of the warband, a shaman who dabbles in alchemy.  His primitive sickle is more for harvesting material components than fighting, which he prefers to do with either touch spells or by simply ripping his enemies into small pieces.  He is a troll, after all.  Claw/claw/bite isn't just for dragons. 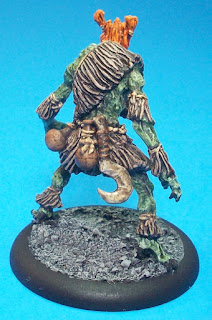 He carries a few magical potions at his belt as backup weapons or tools, which have been shared (under threat of violence) with his kahuna. 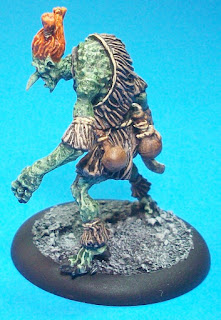 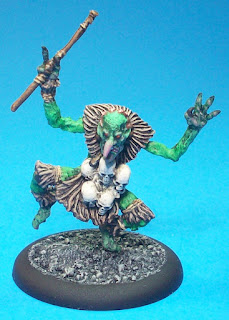 This one's a minor conversion, a witch doctor with a magical wand/rod thing and a bunch of ogre skulls as trophies and impromptu armor.  The "wand" is a handswapped and cut down spear from a different figure, and the ju-ju dance pose is the result of a careful trim and repose. The skulls are add-ons from a GW kit to further alter the base model. 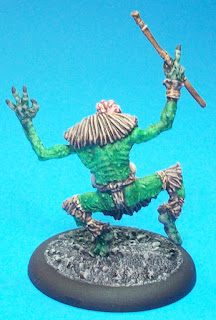 A bit of work to make but it does show off how much variety you can get out of the basic figures, especially if you have several of them and a deeper pool of parts to draw from. 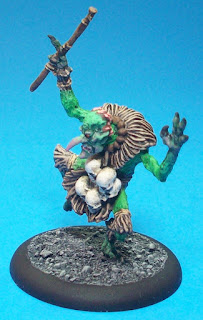 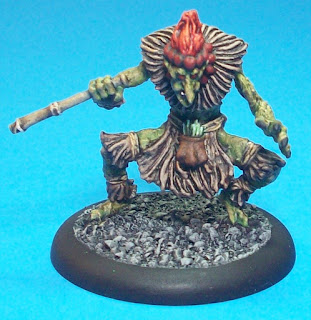 This is a more stock build of the kit used for the witch doctor above.  Blowpiper with ammo pouch and hand weapon.  Probably a witch doctor specializing in concealment and ranged attack spells.   He looks like a sneaky type. 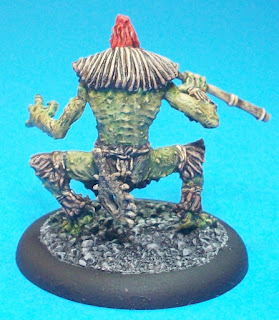 Well, as sneaky as an eight foot tall troll with bright orange hair can be, anyway. 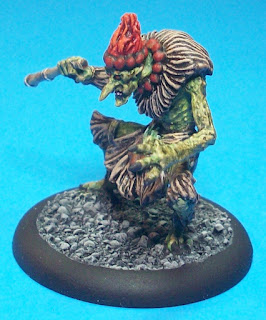 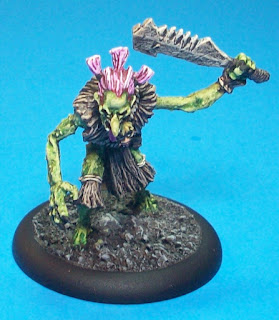 And finally there's the "runt" of the group, or at least that's what Mortal Arrow calls him.  He's still pretty big.  I figure he's the apprentice in the group, with minimal spellpower. 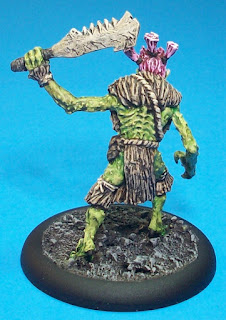 He's got enough brains to realize that hitting people with a club made out of a chunk of bullette jawbone is more effective than relying on magic or brute strength.  There's probably something nasty in that belt pouch too. 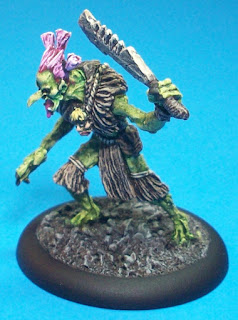