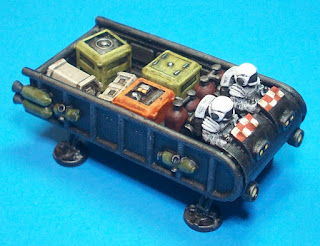 Moongrunt's got a decent array of military figures, but the First Lunar War was fought over burgeoning industrial complexes and the colonial habitats that supported them.  So clearly we need some civilian (or at least noncombatant) minis to get caught in the crossfire. 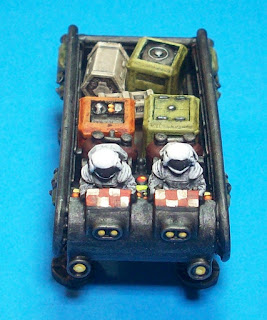 Like many "Moonie" workers, these two "space truckers" are using Chinese equipment.  The stuff's not fancy but it's rugged, reliable, easier to repair than fancy US or French stuff, and most importantly it's relatively cheap. 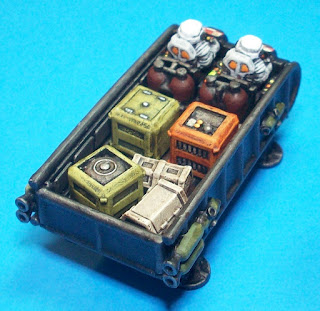 Their sled was bought used through UNSC channels, and has seen some heavy use over the years.  Still flying though, even if some of her venturis are blown out and her frame's been through multiple re-welds. 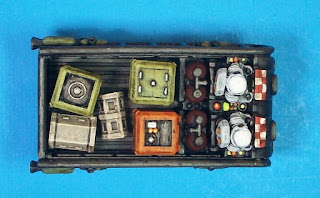 Her payload bed's large enough to do some light hauling of high-priority items, although only the desperate would risk loading anything really fragile.  Her landings aren't as smooth as they used to be. 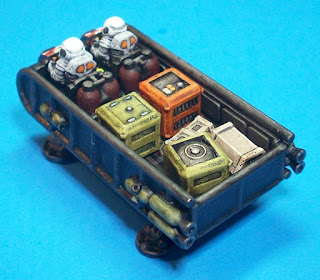 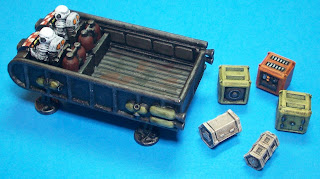 The crew is unarmed of course, but in a real pinch I suppose the co-pilot could resort to doing "bombing runs" with some of the cargo.  Having 50 kilos of machine tools dropped on your collector array from a hundred feet up is going to break some stuff.  Not much chance of hitting a moving target or anything as small as a man, but air combat got its start with people throwing bricks at each other from biplanes.  Mankind's first extraterrestrial conflict starting over someone dropping crates on people they don't like?  That could absolutely happen. 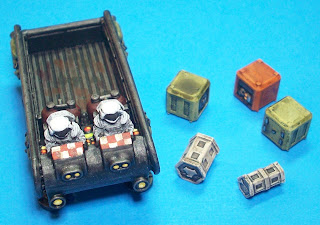 The rocket sled and cargo are available from the Ground Zero Games web store here:
https://shop.groundzerogames.co.uk/
Posted by Dick McGee at 4:38 PM