Quick post to show off a kitbashed fuel tanker using some spare parts from the Dropfleet Commander range.  About 2.25"/6cm long and uses parts from two Shaltari cruiser sprues.  Very simple build and not the best paint job I've ever done, but I rather like the look. 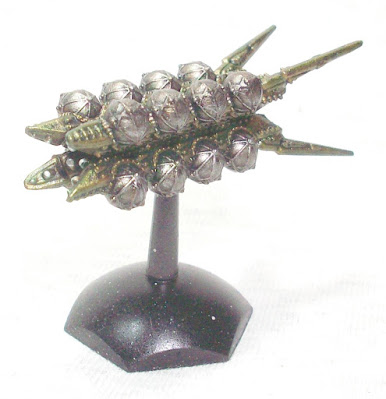 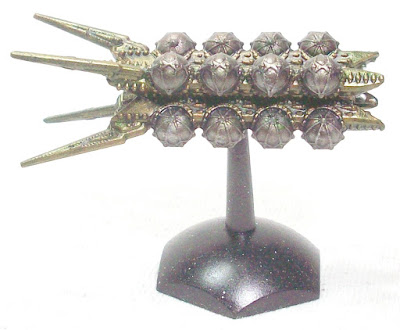 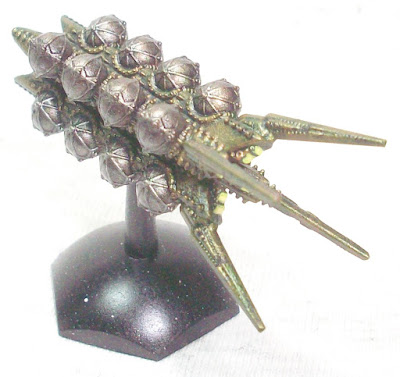 Mounted on a 1" hex base, which are getting pretty rare at this point.  Apparently the last mold for making them finally died sometime during the COVID shutdown and have yet to be replaced, which makes me wonder if they'll ever be coming back.  They've been around for close to fifty years and not having them available any more feels kind of weird, although they were never my favorite style of flight base and there are certainly plenty of other options still on the market. 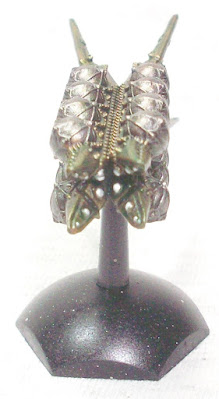 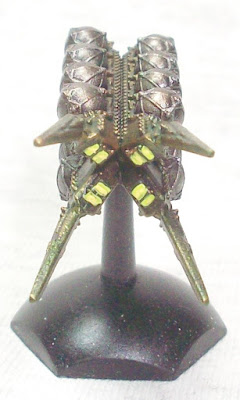 Posted by Dick McGee at 4:18 PM No comments:

Showcasing Wargames Atlantic's two Cannon Fodder scifi infantry kits, in this case painted up for use as Warhammer 40,000 Penal legion troops from back in the 2nd Edition days.  As such, I've equipped them very basically, with nothing but lasguns, bayonets, and their signature frenzon/bomb charge collars.  A few have managed to pick of a knife as well, no doubt stolen from the mess hall, and a small number of them are veterans with bionic arm prostheses.  It's nice to have a good set of figs for these flavorful old models.

If I liked 9th Edition enough to play it I'd do up some homebrew rules for using them in the modern day, but I'd rather play old school 40K from the Rogue Trader and 2nd Edition days. 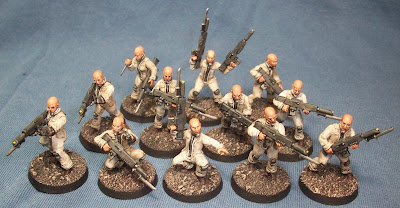 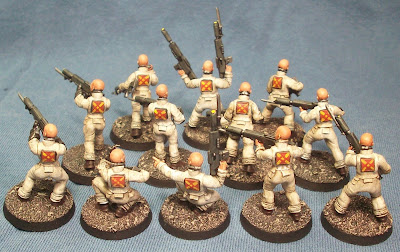 I did up fifty of the models for this project, which amounts to most of the contents of one of each of the male and female Cannon Fodder kits.  There are thirty male figs here and twenty females, which leaves me with four leftover females and a fair pile of heavy weapons and other spare bits for future jobs. 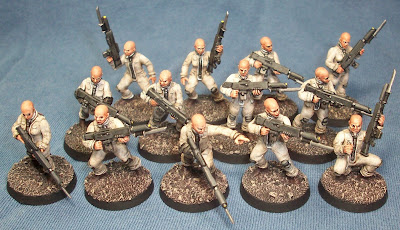 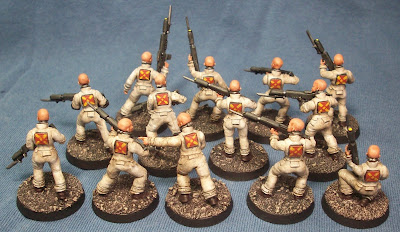 The first (male) Cannon Fodder kit is a real pleasure to work with, easy to assemble and with decent variety of stances and gun positions.  You can build 30 figures with it, which makes it a huge bargain at mere $35 retail.  It's a little short on add-on bits, although there are some very nice backpacks loaded down with miscellaneous gear, several different styles of heads with variations within each style, some grenades, and a half dozen pistol arms and heavy weapons.  Everything is nicely keyed on the frame, so you can be sure you've got the right arms together for each pairing. 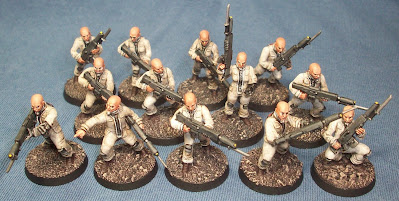 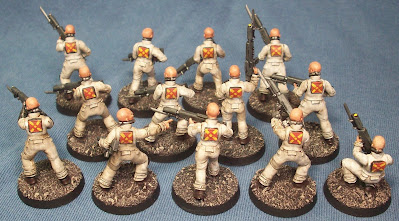 The second (female) kit is the same price but only builds 24 models, four of which are in rather odd crouching poses.  The frame has the same backpacks as the male kit, a different heavy weapon (which you get four of), and a much larger numbers of oddball spares and arms, including both right and left bionic arms, some with guns, some without.  There are a few knife and pistol arms (both left and right), an arm holding binoculars, a pair of arms with a grapnel and rope in mid-throw, and a variety of head styles including one set with pigtails.  A few of the parts (some bionics and pistols) may have appeared on the $6 Death Fields Upgrade Sprue, but most are new.

Both kits are fully cross-compatible, and having both available really expands the modelling options for the male kit a lot.  The only letdown (and it's a big one, unfortunately) is that, unlike the male kit, there is no keying at all on the female frame.  This makes it a lengthy process of trial and error to assemble, since the paired arms aren't anywhere near each other on the frames.  It took me five times as long to assemble 20 figs from the unkeyed kit as it did to do 30 of the make models. 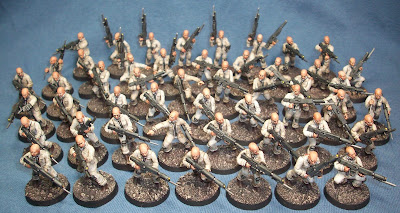 To put it mildly, I wasn't pleased when I discovered this, and I was even less pleased when I contacted WA to ask if they had assembly instructions for the unkeyed female kit (which uses only a single frame) and got no response.  At time of this posting they haven't put a guide up online, despite having images of the frame on their store that could be easily photoshopped to add a key to it.
Because of this, I'll gladly recommend the male kit, but advise no one buy the female kit without being aware of the issue.  You can manage to pair the arms up with a lot of test fitting and trial and error, but even having finished a bunch of them I'm still not sure I've got all the arms matched up properly.  When (or if) they get a simple guide up online the problem vanishes, but it hasn't happened yet.
Also, be aware that Wargames Atlantic kits don't come with bases, so you'll have to provide your own.  In this case they got stuck on GW 25mm bases to match the usual Imperial Guard bases, but I have hundreds of them laying around from the old days.  Washers would work just as well, and of course there are many other varieties of plastic or resin bases commercially available. 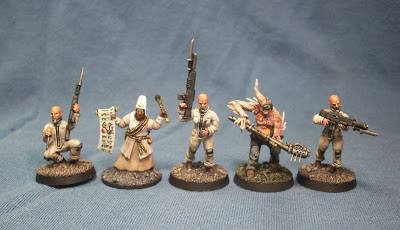 Scale comparison shot with a Frostgrave wizard and a Games Workshop poxwalker.
Posted by Dick McGee at 11:22 AM No comments: