My latest 15mm scifi project comes from Ion Age's Prang range.  The Prang are an amphibious alien race that are best described as militaristic bipedal hippos with weapons and armor to suit their physique.  There are basically two different types available, the mercenary/outlaw raiders and the actual Prang army troops.

The Raiders are pretty diverse lot, although a lot of their gear is clearly "borrowed" from the regular Army arsenals.  The background fluff for them makes it clear that they're pretty much in it for the loot and will make off with anything they can carry.

I particularly like the captain's "pet" here.  Much more fun to paint than a parrot.

As you can see, their guns are kind of huge.  Plenty of pouches and bags for hauling off plunder, too.

The Army troops are a bit more uniform in appearance, and they tend to come in larger numbers.  As you can see here, they're much more massive than your average human being (or Terminator robot, in this case). 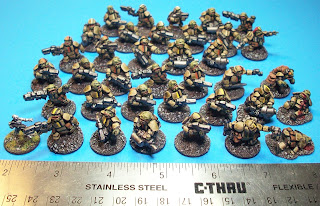 I've got this platoon split into three squads of eleven, each with a different leader and three heavy weapons.

They've also got a nice medic (who could also be some kind of scientist or civilian merchant or something) and a couple of casualty figs.  Those are always fun to paint, and make good markers for objectives even in rules systems that don't track injured troops on the tabletop. 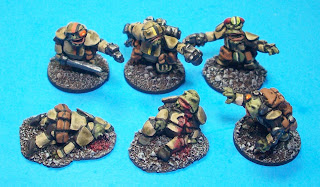 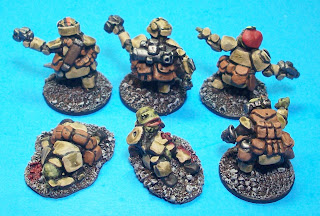 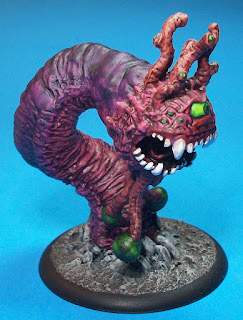 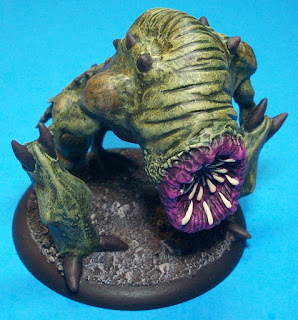 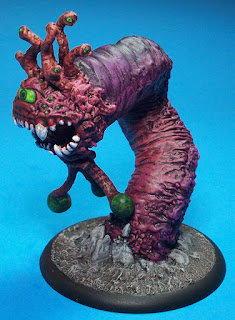 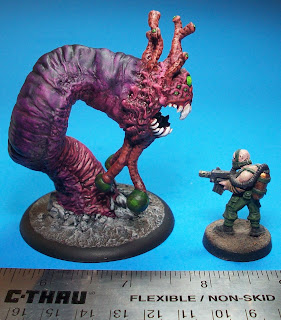 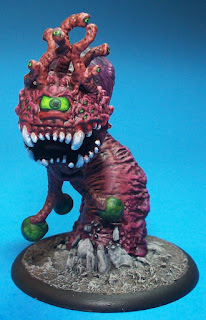 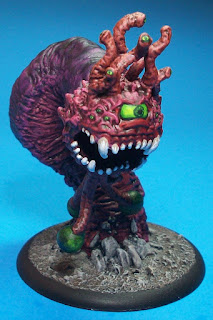 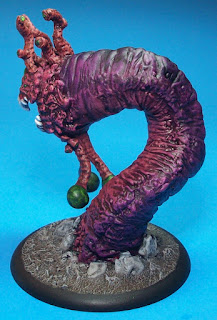 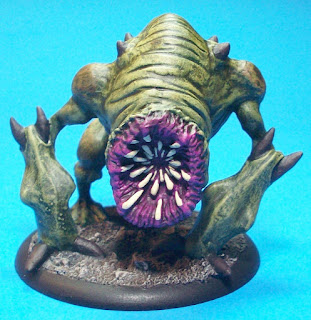 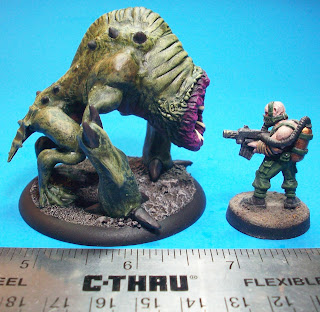 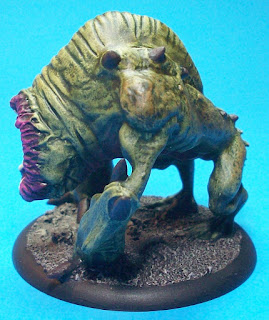 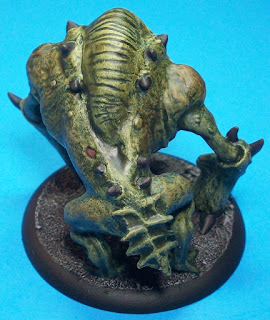 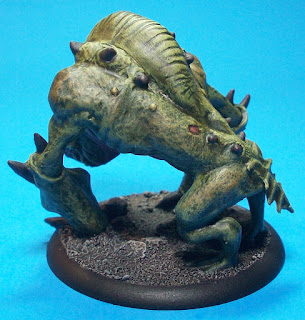 I suspect the Cultist theme in Rogue Stars was meant for something a bit more Grimdark, but I like it for seriously weird alien types. 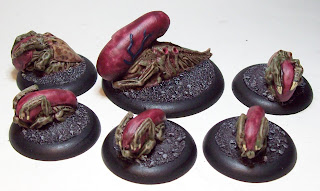 Built using the old "Large Sadistic Demons" from Asgard, currently in production as "Flesharons" through Alternative Armies.  I love these nostalgic old models, simple as they are.

As far as Rogue Stars stats go, I'd use the following:

3 x Servicer Xenopods (the little guys) each with the Vegetable and Psionic traits and the psionic abilities of Blink, Healing, Levitation, and Telekinetic Push (30XP each)

2 x Enactor Xenopods (the mid-sized ones) each with Vegetable, Psionic, and Psionic Mastery level 1, and the psionic abilities of Blink, Levitation, and either Nightmares or Telekinetic Strangle (30XP each) 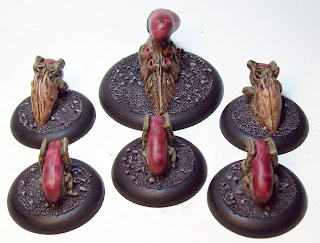 No equipment at all, relying on their mix of psionic abilities for offense, defense, and mobility.  They get a huge +6 to psi rolls initially due to Gestalt, but if you can inflict casualties on them they fall apart pretty quick.  Early priorities for spending XP would be levels in Psionic Mastery, followed by more psi abilities and eventually defensive and buffing traits.  They really don't want to melee anyone (which is, again, probably not what the designers were thinking of with the theme) and focus instead on using psi abilities to move themselves and their enemies around, heal damage, accomplish goals (or foil the other guy's) and generally be irritating.  The Director's ability to teleport (at +9 to the die roll!) and then pop a Mindscream is the biggest offensive trick, and the Servicers' TK push lets them make juicy clumps of targets for to aim for with it.  Robots are a problem for the crew as a whole, although TK strangle (aka "mentally unplugging your CPU, tin man") gives you something to use besides unarmed combat. 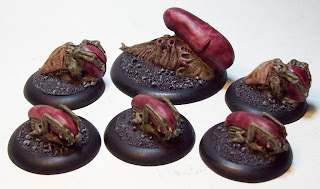 The species aren't really Vegetables, but the trait seems like the best way to represent their extremely alien nature.  Bit of extra durability, immunity to some effects, resistance to others, but (as with all horrific infestations) they don't like being purged with flame.

The other "Flesharons" make a very different crew, this time relying on integrated cybernetics.  Some background fluff, the "Awfuls" (as humanity has nicknamed this largely incomprehensible species) are undergoing a schism.  The Purists in the first post are the Old School faction, using psionics for virtually everything.  These guys are the Melded, a recently arisen group that eschews native psi power for biomechanical cyborg enhancements. 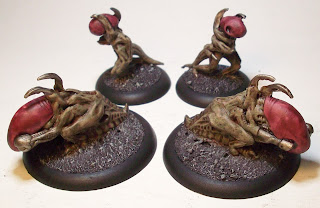 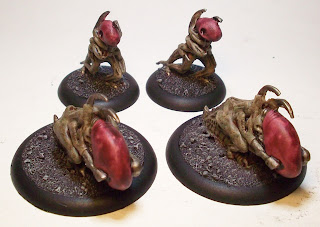 2 x Sickle Drones (the little guys) each with the Ambidexterity, Claws, Tough level 1, and Vegetable traits and two Bionic Arms (30XP each) 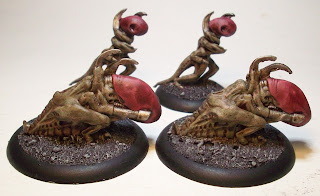 Extremely tough for critters with no actual gear, with even the little guys getting a +4 on most damage result rolls against them and the big guys going to at least +7 (more if a hit lands on a bionic arm).  Hard To Kill makes it hard to make early wounds stick on them as well.  They're usually going to be outnumbered, but having Ambidexterity on everyone lets them get more attacks per action than you'd expect.  Not very accurate attacks, but lots of them and with some fairly nasty weapons.  Don't forget all their Claws have Crunch due to the twin Bionic Arms, so you can remove troublesome enemy equipment if need be. 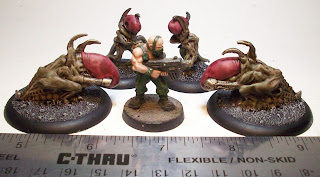 This was originally posted last year over on Lead Adventure Forum, but I'm mirroring it here since my original photo links have died.
Posted by Dick McGee at 2:02 PM

Latest project for 2018, a crew of 28mm figures for use in Rogue Stars by Osprey Wargames.  Rogue Stars is one of those minis games that also borders on flat-out roleplaying, with the rules, setting, and theme encouraging you to personalize your crews and track their successes and failures on the tabletop.  Taking that to heart, I've cribbed a quartet of models from the Gates of Antares range for use as a slightly shady corporate "security" team. 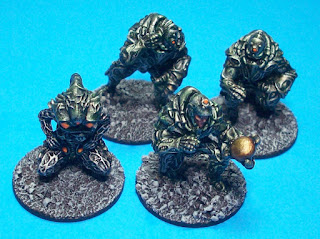 ExoTech Incorporated is a mid-sized manufacturing company that specializes in xeno-technological synthesis - the science of combining various alien technologies with human tech and each other to produce an end product whose final result is greater than the sum of its parts.  They produce a wide variety of high-end civilian gadgetry that sell well in Core Space, as well as a line of military/paramilitary gear with a distinctive biomechanical look.

ExoTech acquisition agents are common sights in Rim Space where they purchase all manner of new alien technology for use in research and development of new products.  On occasion they encounter dangerous criminals, hostile local rulers, and species who refuse to share their unique scientific advancements no matter what they're offered.  When that happens ExoTech Security is called in, dispatching heavily equipped combat specialists to troubleshoot whatever the problem may be - often by literally shooting things.

The most common Security troops are the armored infantry, wearing their signature heavy combat suits with integral powered gauntlets and generally carrying sophisticated molecular slugthrowers as primary weapons.  Each trooper is generally given some specialist training beyond their basic combat skills, ranging from medical to scientific to leadership skills.

Rarer but even more lavishly equipped are the Independent Operations Specialists, who are most often issued elaborate stealth suits, dual molecular slugthrowers with advanced silenced ammunition, and a variety of other advanced intrusion and restraint gear.  IO Specs often work alone in Core Space, but out on the Rim they're more often seen (when they're seen at all) with standard Security troopers in support.

In Rogue Stars terms, this crew is built using the "Star Cops" theme since ExoTech Security is (at least in theory) wholly legal and aboveboard.  They certainly never participate in ethically questionable activities like corporate espionage, technological thievery, or outright assassination.  Rumors of gray or black ops activity by ExoTech are just that - rumor.  Only rumor.

Their tactical discipline is usually going to be "Heavy Firepower" to exploit the Hail of Fire potential of their weaponry in the early stages of any fight.  They can easily blow through all five counters in a single flurry of shooting, but if that kills enough of the opposition then who needs to play for a long game? 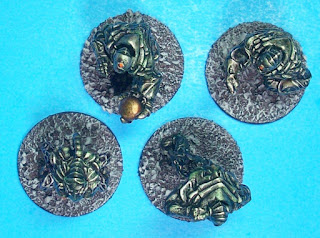 Individual characters from left to right above:

In game terms, the strength of this crew is largely in their gear.  They've got pretty good armor on the troopers and Killer is extremely sneaky and hard to shoot.  All of them carry automatic weapons with infinite ammo, which means they can really lay down a lot of attacks per action in a pinch.  The troopers are also fairly effective in a melee although that's likely to be more of a defensive option than a primary tactic.  All their armor is sealed, giving them a lot of resistance to many annoying effects.  Finally, Killer's access to the rarest equipment gives them key gear like a Disentangler and Electromagnetic Shackles.

Their weaknesses include very limited mobility, a lack of really hard-hitting weapons (nothing over damage 4), and no veteran characters or other action/reaction boosters.  With only four models they'll also start many games outnumbered, although their damage output may make up for that.  They also don't have any grenades or psionic tricks up their sleeves.

Early priorities for XP spending should probably include getting some mobility gear (maybe jump packs on everyone?), improving existing skills, adding a heavier weapon or two (conversion time!), and the usual increases in experience levels and adding toughness.  As with any Rogue Stars crew you'll probably lose characters in battle pretty often.  Replacement carbon-copy troopers will probably work well enough, but if Killer goes down for good you might want to shuffle around her replacement's gear and skills to better suit whatever kind of crews and scenarios are giving you the most trouble.