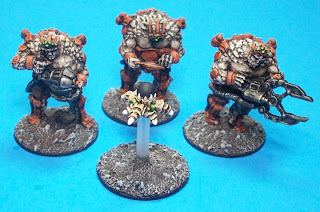 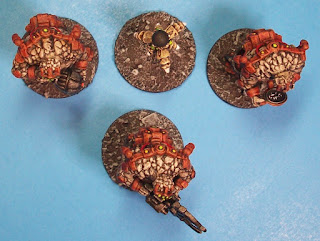 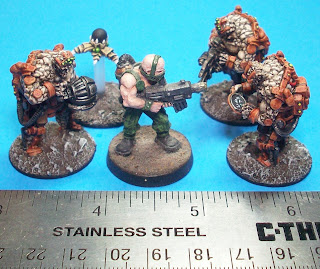 Quick post showcasing Ground Zero Games' 15mm Phalon miniatures, painted up here as an alien mercenary platoon with a pair of UNSC liaisons to keep an eye on them.  Phalons make great allies but it's best not to drop your guard around them since they've got a cultural bias toward "renegotiating" agreements (often at gunpoint) the moment they see an advantage in doing so.

GZG only makes a single pack of these figs, although they do have pretty good variety with a five different poses including leader and trooper with pulsers and three different support weapons.  Hopefully they get an expansion some day, adding more poses of grunts and command figs as well as commo specialists, crew-served guns, and some power armor with their signature biotech look.

While Stargrunt never did see the "Bugs Don't Surf" expansion come out, there are playtest rules for the Phalons over here, which I'll vouch for as being quite playable and good at reflecting their canonical racial traits and equipment from Full Thrust Fleet Book 2:

Posted by Dick McGee at 8:59 AM No comments: