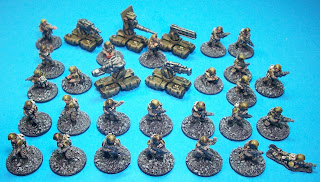 Quick post showcasing some of Ground Zero Games Colonial Defense Force infantry minis, with backup from some Ion Age weapon platforms.  Since the CDF figs are "generic" models in Tuffleyverse terms and the Romanov Hegemony currently lacks their own minis I'm using these as a Hegemony colonial guard platoon.  While somewhat better off than pure militia, CDF forces are still pretty lightly equipped and best off at local defensive roles.  Their only transport tends to come from commandeered civilian trucks and the like, and their weapons tend to be a mix of dated autorifles, autoshotguns, assault carbines, and the odd light machine gun. 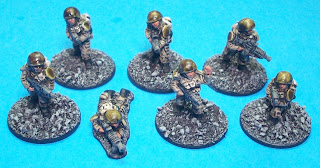 I'm assigning these lads to the 301st Tsitsihar Defense Corps, one of several local guard units that fought to defend their colony from both ESU regulars and their Khalifate mercenaries throughout much of the 3rd Solar War.  Tsitsihar eventually fell with the few guard survivors taking to the planetary outback to adopt a guerilla resistance role.  The Xeno War led to a general ESU withdrawal from the planet that resulted in the Romanovs retaking their holdings, but this was followed by a series of disastrous Kra'Vak and Phalon raids that further battered Tsitsihar.

In short, these guys have had a hard few years, and things don't look to be getting better for them anytime soon.  Still, they've been active throughout a long period and faced a fairly diverse array of opponents so they've got plenty of uses on the tabletop.  In addition to their long struggle against the ESU and Khalifate, other opforces include Kra'Vak, Phalons, Out Rim pirate raiders, several clashes with Incorporated Japanese troops over mining rights, and a brief campaign against some local insurgents with FSE "advisors" and semi-covert backing.

The 301st platoon structure was generally a bit understrength and became more so as time wore on.  The force here has four squads.  Two are designated as "line" units with a pair of LMGs and a mix of lighter personal firearms.  They usually have seven men per squad in practice, although their ideal TOE calls for nine.  Their mixed weapons produce an effective 2FP each, jumping to 3FP in the first range band where the shotguns and carbines work best.  They should also receive a favorable one die type shift in assaults, again representing the odd shotgun/close assault firearm in the squad.  The LMGs are standard d8FP, d10 impact conventional MGs.  Personal armor is d6 for battledress and a halfway decent helmet.

The third squad in each platoon is designated as "support" and swaps out the LMGs for two heavier weapons on semi-autonomous tracked weapon platforms along with dedicated drone controller specialists.  These platforms are locally manufactured and appear in fairly large numbers throughout the guard.  Ironically, the design was originally an ESU model used in the First Solar War, updated and modernized with better pseudo-AI and power systems.  They can accommodate a wide variety of weapon turrets, in this case two styles of vehicular DFFG-1 systems.

The tracked guns are fairly durable, sporting a d12 armor die and acting as a trooper in the squad for all purposes.  Doctrine calls for sheltering behind the guns where possible, so any randomized hits on the squad that hit human troopers can be rerolled once, hopefully resulting in a hit on a drone instead.  They use the same quality die as the rest of the squad unless both drone controllers have been slain, in which case they drop to d4 to represent their minimal AI capability.  If all the troopers in a squad are slain the drones will attempt to withdraw off the table at best speed, heading for a pre-programmed rally point.

The fourth "squad" is designated "command" and usually operates as two small detachments rather than a single unit.  Normally the platoon leader and medic form one element with one or two riflemen, while two drone controllers, three gun platforms, and sometimes one or two more riflemen form the second.  The heavy weapons tend to be longer ranged variants than the DDFGs found in support squads.  In this case we have a two vehicular laser variants (left and right) and a small mass driver (center).

The platoon leader generally has the training and equipment to act as a drone controller in a pinch, although they're generally too busy rallying troops and coordinating actions to do so.