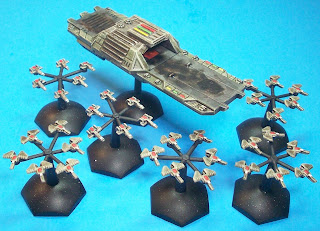 I've always been a fan of Full Thrust's default setting, generally known as the Tuffleyverse.  It's not a very fleshed-out universe compared to many game worlds but there are enough teasers scattered throughout the two Fleet Books and the various future timeline notes to really get your imagination going.  The Tuffleyverse is very open to customization, reinterpretation and head canon.  Plenty of room for custom fleets and scenarios without worrying about someone telling you you're doing it wrong.  Is it a little silly with some of its factions and future developments?  Sure, but it was written way back in the 90s and never really intended to be all that serious.  As a background to push minis around it's just about perfect for me.

So, why all the gushing about a decades-old game setting that was little more than an afterthought from the author to justify scenarios?  Well, today's post is a bit of Tuffleyverse history showcasing how you can take minis from almost any range and plug them in to the universe without a real struggle.  Let me introduce you to the Pan-African Union heavy carrier Unity.

The Unity began service as an ESU Chairman-class assault carrier during the later days of the Second Solar War.  The initial production run consisted of six ships, with four out of a second run of six more ships completed by the war's end.  The class was never particularly successful, suffering three outright losses during combat and having a fourth ship so badly damaged that it was scrapped as unrepairable.  The remaining six completed ships were put into fleet reserve by 2161 where they remained until the outbreak of the Third Solar War in 2165.  Only two were brought back into service at that point, the remainder having been largely stripped for spares.  Both were lost in action by 2171, by which point new carrier doctrines and construction standards were coming into place in the ESU military. 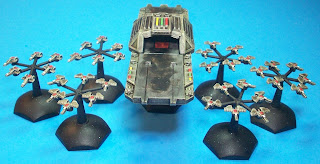 In 2172, a diplomatic agreement led to the sale of many ESU fleet reserve ships to the PAU in exchange for their assistance in the ongoing war.  The ship that would become the CVH Unity was delivered by FTL tug to the PAU shipyard facilities off the Grand Mountain colony where refitting and refurbishment began.  The original Chairman-class had sported a fairly heavy mix of missile systems as well as a moderate fighter complement, and suffered from a drive system that had never managed to perform quite up to design specifications.  The ship was delivered without offensive weapon systems, although it did retain its extensive defensive weapons array.  The PAU refit installed a ventral hanger bay in place of the former missile magazines which greatly improved fighter handling operations, upgraded the engines and inertial compensators, and strengthened some main structural supports.  The result was a specialized heavy carrier with no real offensive weaponry but better handling and a larger fighter complement. 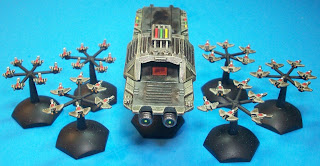 The ship was commissioned as the PAU SS Unity in 2173, the name being reference to both PAU "United Africa" internal politics and the loose alliance they'd formed with the ESU.  It served throughout the remainder of the Third Solar War with fair success, avoiding close action while providing fighter support to multiple combat operations.  The start of the Xeno War found her in the Sol system on a diplomatic mission.  By the time the PAU was ready to join in UNSC-led defensive efforts against the Kra'Vak, it had become apparent that offensive carrier tactics worked poorly against the alien foe.  As such, the Unity was held in the core systems on convoy escort and defensive patrol duties.  During the Siege of Sol she (like many specialized carriers) served as mobile bases for the waves of planetary fighters committed to break up Kra'Vak assaults.  In one notable action her flight crews managed to service 320 fighters over the course of a six-hour engagement.  Fewer than 30 survived to be evacuated to the Omega Defense Line on board the Unity afterward. 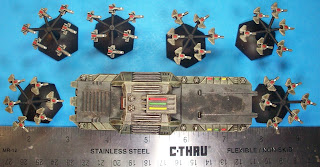 There's been some discussion lately about giving different factions special rules to differentiate them more.  I'm not a huge fan of the idea, but here's an idea if you want to go along those lines.
The Pan-African Union Military Star Fleet emphasizes carrier tactics and has a long tradition of training fighter crews who can best be described as "unusually enthusiastic" about their jobs.  Cults of personality often form around established aces, and flight corps recruitment numbers are excellent.  While the technical end of their training is solid the final results can be more than a bit erratic as pilots often compete for kills.
To represent this, when using the optional Fighter Pilot Quality rules from More Thrust, if you roll a 2-5 "normal" result, you must reroll the die once and take the second result instead.  This greatly increases the odds of getting an Ace pilot - but it also increases the odds of getting a Turkey group. 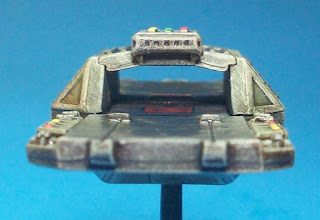 The Unity miniature comes from Brigade Models' CDSU range, and is to date the only Chinese ship to get the 3D remaster treatment.  It's a well-made model with a mix of resin and metal components that fit together very well.  I suggest leaving the "flying bridge" part off till you finish painting so you can get at the inside of the "tunnel" and the detail there.
https://www.brigademodels.co.uk/Spaceships/CDSU/SFS-510.html
The fighter brood illustrated here are also from Brigade Models, this time from their Neo-Soviet range.  The "spider" flight bases are from Ground Zero Games, although these are the older metal version rather the new acrylic ones they now sell.
https://www.brigademodels.co.uk/Spaceships/Neo-Soviet.html
https://shop.groundzerogames.co.uk/ft-002.html 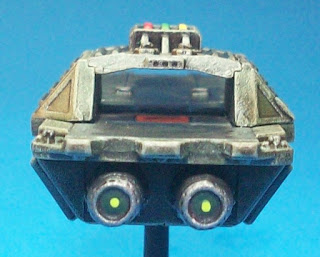