Ground Zero Games has recently released a range of new miniatures for their alien Kra'Vak line, the first wave of which I've painted up and posted here.  The Ground Zero Games web store listings for these minis are found here:

They're visually similar to the original K'V minis but sport generally better detailing and they seem considerably sturdier and easier to assemble. 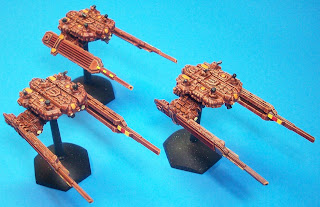 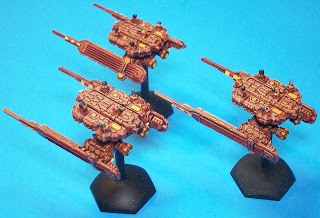 These can be socketed into the models in a variety of spots, allowing you vary your designs and payload. 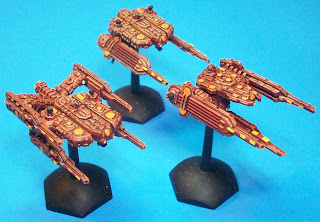 They're also quite optional, as the empty sockets just look like more hull detailing. 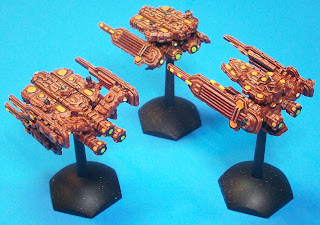 All in all I really like the new range of K'V minis, which retain the look and feel of the originals while improving detail and variability. 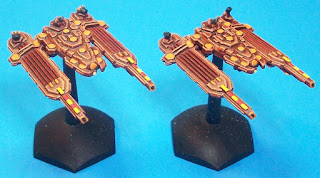 Only minor niggle I could raise is the optional weapon mounts, which are a clever idea but small enough to be pretty fiddly to glue in place. 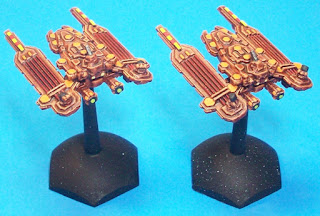 They are optional though, so a very minor issue at worst. 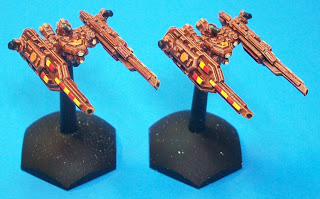 Jon also posted a general call for feedback on the existing Kra'Vak rules, which can be found in Fleet Book 2, available as a free download here: 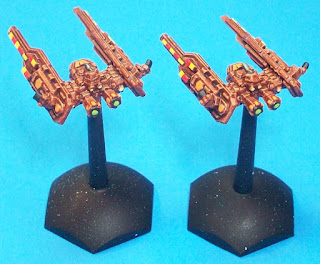 This is an interesting turn of events, since new releases for Full Thrust have been very much secondary to 15mm ground combat minis for years now. 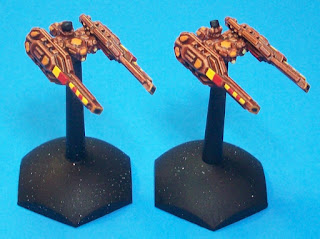 For Jon to not only do his first full-fleet release (and the first set of re-sculpts since the Big Four were finished) in years but also to be asking about game mechanics and performance is enough to make me wonder - is there something new coming for FT rules? 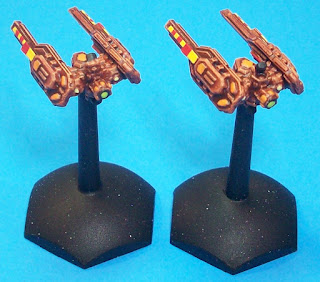 "With the release of the first of the re-worked Kra’Vak ships, I wanted to ask the FT players on here about your experiences with K’V fleets (under the FB2 rules) over the years….. those of you who have played them, or played against them - what are your experiences about how they work under the current published rules? Are they overpowerful, underpowerful, about right…? Is there anything about them you’d like to see changed or tweaked? Do they give a sufficiently “different” feel to play compared with the Human fleets? Do they need any additional weapons systems?


Feel free to have a frank and open discussion - all comments, criticisms and ideas are welcome! 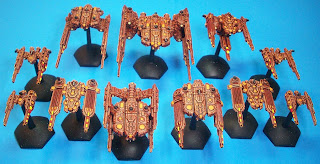 I've played both with and against the K'V since the days of More Thrust where their rules were definitely overpowered, but that's irrelevant since FB2 made so many changes.  While I no longer have my old play results log for definite numbers, the K'V under FB2 are underperforming in my experience.  Their win ratio is no better than 40% in my games, and probably closer to 35%.  Moreover, many of their biggest victories were against people who were playing against them for the first time or two.  With experienced players the ratio dropped further, maybe reaching the 30% mark. 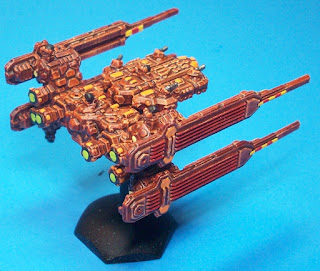 The problem as far as I can tell is cost inefficiency.  They pay a premium for advanced drives and their unique weaponry, but their guns are not enough better than human-tech weaponry to make up for their cost.  It's not a huge shortfall and the high variance of K-gun mechanics somewhat conceals the effect but they just don't quite do the job, especially against beam-heavy human fleets that don't spend mass on screens or armor (which are both effectively "dead" against K'V).  When facing humans in equal-point games the Kra'Vak wind up outnumbered, outmassed, and/or outgunned - and sometimes all three. 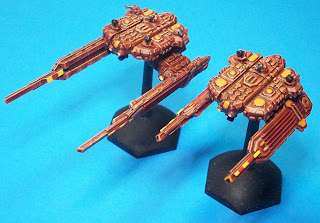 Other than that I think they play fine.  Advanced drives are interesting in both vector and cinematic games, K-guns feel suitably nasty even if they aren't really, statistically, and they have just enough weapon variety to be suit my tastes without adding undue complexity to the game. 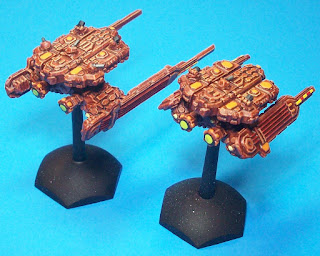 That said, even a 40% win rate is too low for comfort and should certainly be addressed.  There are some obvious approaches to a fix - changing point costs and altering the mass of weapon systems are often touted - but anything that invalidates existing ship designs seems kind of iffy to me.  Fan-based internet-published Full Thrust material has been given pretty much free reign to add and modify things by Jon over the years with the one caveat being that nothing should flat-out invalidate the GZG books.  So I'll suggest an approach that avoids mathematical design changes over a broad but easy to remember rules change: 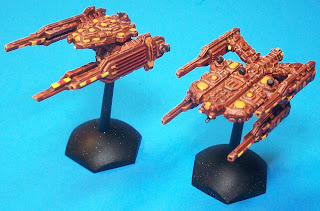 When a ship takes a threshold check, if any of the damage in the volley of fire that caused that check was caused by a K-gun or Multiple Kinetic Penetrator pack, then add +1 to each roll in that threshold check.  For example, if a ship were to take its first thresh check from a volley of K-gun fire it would ordinarily check for loss of each weapon, drive, defense, etc on a d6 roll of 5+ rather than the ordinary 6+ result.  Note that scattergun damage does NOT apply this modifier - unless some of the inflicted damage came from K-guns or MKPs thresh checks are rolled normally.

This modifier is cumulative with all other thresh check mods, such as the effect of suffering multiple thresh levels from a single volley or the -1 when checking for core systems (if using that rules).  So an intact ship with four hull rows that took enough K-gun damage to drop to 50% hull remaining (ie losing two thresh levels) would lose systems on a 3+ result - starting at a 5+ for 50% hull loss, dropping to 4+ for "skipping" a thresh check at 25%, and finally to a 3+ for the K'V weapon mod.

Regardless of modifiers, rolling a 1 on a thresh check always results in the system remaining operational.  This shouldn't matter often, but no matter how many crowbars get chucked through your starship there's always a chance of something still working right - until the hull breaks up, anyway. 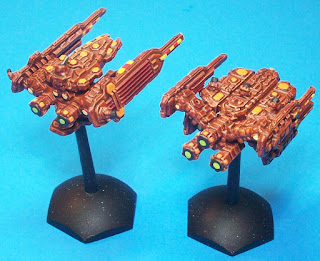 Some fan rules variants reverse thresh checks so low rolls are fail/system breaks down and high ones are pass/remain operational.  If using one of these, reverse the modifier above so that being damaged by K'V weaponry is suitably dangerous.

Other fan variants give human-tech fleets access to some or all K'V weaponry.  If you do play with this kind of tech-sloshing, I absolutely would not apply a thresh modifier to "borrowed" K'V weapons.  Similarly, if you have K'V ships borrowing human beams, then skip the modifier for them as well.  The intent behind this rule is to give a boost to an underperforming fleet with limited weapon options, not to make K-guns and MKPs a cheap way to make thresh checks nastier when much of the damage is being scored by more efficient beams, missiles, etc. 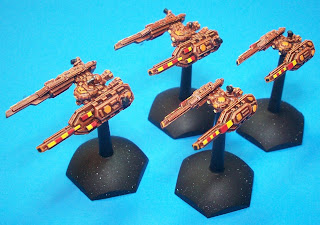 The end result of all this is that "pure" Kra'Vak fleets will still have the same costs and raw damage output, but their enemies will tend to lose more guns and maneuverability than before and those losses will come a bit earlier in the battle.  This should swing the win:loss ratio closer to even, but it'll take some playtesting to establish how close. 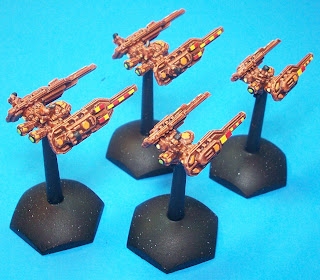 So, give this rules change a test drive or test your own fixes, but whatever you do, let Jon at GZG know what you think about the Kra'Vak.

EDIT:  11/5/18  I'd be particularly curious to here about any playtest games with ships using 3-row hulls from the UNSC playtest article here:

Never tried playing the K-gun/MKP variant rule against 3-row hull ships, and I'm somewhat concerned that the effect may devalue the (relatively expensive) advanced hulls too much.

And keep your fingers crossed.  Maybe this call for input is a good sign for seeing FT3.0 or Fleet Book 3 or something come out from GZG at last.