Revisiting the idea of playing Starguard Amerons in 15mm, thought I'd look at potential rules under Stargrunt 2 to model the fluff in their native Starguard setting.  Also, taking an opportunity to show off a second platoon of their infantry. 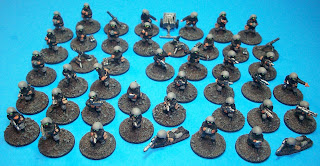 A typical platoon will have two large "line" squads with 12-15 men depending on the current supply of manpower, backed up by a third "support" squad of specialists with various support weapons, mostly inexpensive mortars and rocket launchers.  The support squad is more often short-handed than the line units are, although they often have a few extra troopers (often from outside the platoon) assigned as "mules" hauling ammunition. 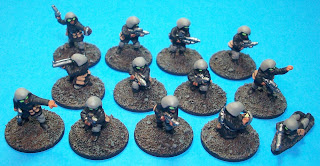 Ameron gear in Stargrunt terms is pretty basic stuff.  They get d4 armor for battledress and a helmet, which is about as bad as it gets.  Their standard infantry weapon is a basic low-tech assault rifle, with firepower 2 and impact d8, usually a locally-built Wrath v7 AR.  Some models (mostly pastors and a few weapon crews) are issued heavy autopistols with firepower 1 and d10 impact, although these are of very little use in a firefight. 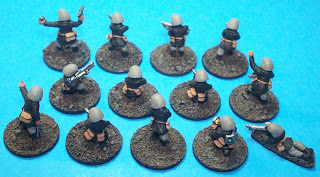 The most common support weapon is the Fury SAW, a conventional light machine gun with firepower d8 and impact d10.  Some squads are issued one or two reusable IAVR launchers with the usual firepower d10 and impact d12(x2), usually with a half dozen or so reloads spread among squad members.  Most armies prefer single shot buzzbombs for this role and insure every trooper has one or two available, but Amerons are less well-equipped.  The Larsen HAMR is another fairly common sight, issued to expert marksmen with sniper training.  It has the usual d8 firepower due to low rate of fire and d12x2 impact.

Most platoons include an integral fire support squad with a variety of light mortars, medium spigot mortars, and multiple rocket launchers (which use the stats for medium mortars).  Ammo is generally pretty limited outside of fixed defensive operations, so allow no more than 3-4 fire missions per light mortar ad 2-3 for mediums and rocket launchers.  Units with an attached ammo cart would have another 1-2 missions available.  Carts are soft-skinned targets with only d6 armor and any penetrating hit triggers an explosion that inflicts d6 hits with impact d12 on any unit within 6 MU.  They can move 4 MU a turn with two crewmen dragging it, or 2 MU with a single crew. 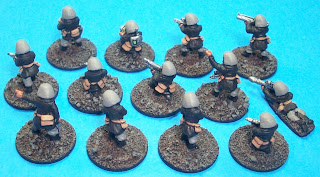 While their equipment may not be any great shakes, Amerons are noted for solid morale.  As long as their platoon's pastor is still active (including being walking wounded) they are treated as having high motivation regardless of mission AND ignore penalties for abandoning the wounded (who are either "granted mercy" on the spot or expected to make their way to medical aid stations on their own).  Without a pastor, a platoon reverts to whatever motivation their mission would normally call for and must deal with casualties as normal.
You will note that I haven't mentioned medics.  Most platoons don't have one, as they have some odd cultural ideas about modern medicine and faith healing that severely limit the number of medics available.  When they do have a formal medic, they're generally assigned to "mule" duty dragging an ammo cart until called for and generally only act on orders from the pastor while he's still alive. 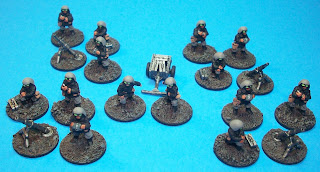 In terms of leadership, Amerons are very average and should use the normal spread of counters when determining random ratings.  Their high motivation does help with morale tests, though.  Quality is generally regular, with a few rare veterans and occasional green units where raw recruits have outstripped returning casualties and experienced replacements.  In game terms, use about 70% regular, 20% green, and 10% veteran counters for random ratings.  Elites would have better equipment and support than this style of basic infantry. 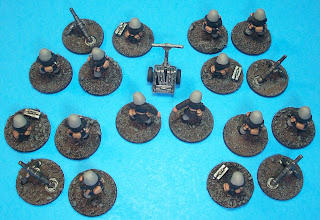