Full Thrust Late Arrivals - the Heiress and her Minders

Looks like we've got a couple of last-minute arrivals before the convoy finally departs.  They actually showed up after the formation had departed high orbit over Terra en route to the jump limit, coming screaming in on a highly unsafe FTL entry vector that had System Control in a furor of recriminations. 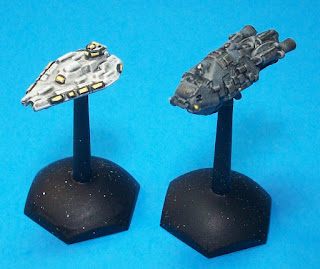 Sadly, the massive fines this stunt has earned the shipowners is unlikely to have any real effect on the behavior, as we're looking at the private yacht of Avalon Stilton, the disgustingly wealthy young heiress of one of the Core's richest families.  A few million UN stellars worth of penalty charges is pocket change for this one. 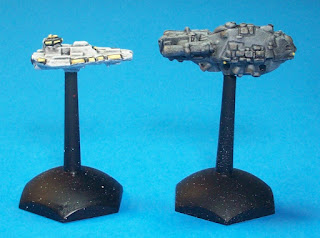 Her Luxury-class yacht, the "Nineteenth Birthday" arrived accompanied by the PMV Lookout, a Sentry-class armed transport built in the High Canada shipyards and popular with some security firms.  While the yacht is nothing but a starfaring pleasure palace, the Sentry-class is a paramilitary ship with both defensive weaponry and a crew of hardened combat operatives and personal security specialists.  Miss Stilton probably isn't thrilled to have a ship full of minders along on this trip, but Daddy isn't fool enough to let his Precious go slumming in the Outrim without them. 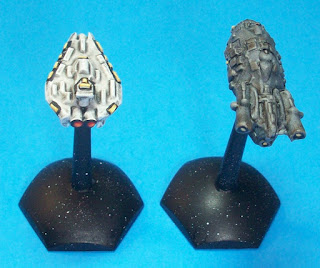 The Lookout's captain has already apologized for breaking astrogation regs to Star Commodore Sturn, the UNSC officer in charge of the convoy.  "Nineteen" appears to be nominally commanded by one of Miss Stilton's current paramours and took over twenty minutes to respond to hails because (according to his first mate) "he was filming a tri-dee in the shower with Avalon."  No explanations or apologies were provided when he was done with his...activities, just a curt request for "a good spot in the convoy formation with a nice view" and an inquiry as to where to send the payment for whatever fines the two ships had accrued.
This is going to be a long trip. 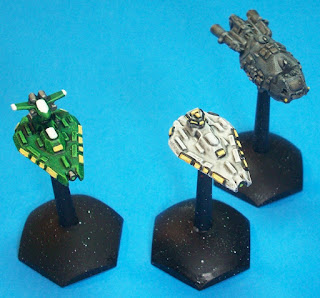 It's worth noting that the convoy now includes two of the Rolls-Royce Luxury-class yachts, which is pretty unusual given their cost and small production numbers.  The Shamrock Stellar Shipping Services flagship Lady Luck has been heavily customized to dock a high-performance Ardent-class cutter where the ship's owner's cabin and observation deck were originally installed.  Miss Stilton's Nineteenth Birthday appears to unmodified externally, although the interior has probably been specially fitted to suit her notorious tastes. 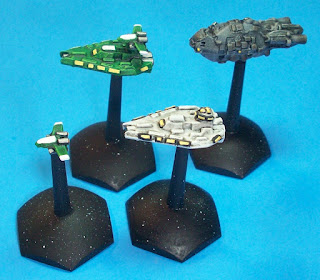 Interestingly, a records search shows that the Lady Luck was formerly owned by the Stilton megacorporation and served as the personal transport of Trenton Hilton, father of Avalon Stilton.  Further searches on social media reveal that Miss Stilton is on her second yacht, the previous one being the Eighteenth Birthday which was scrapped last year after a serious collision.  Avalon was offered her father's ship as a replacement when he retired but refused it on the grounds that "it was all used and gross and she didn't want a hand-me-down" which resulted in her being given a brand new yacht for her last birthday.
Yes, definitely going to be a long trip.