While I'm mostly a 15mm player for scifi ground combat these days, in years past I did quite a bit of Starguard, one of the longest-lasting rules sets in the genre and still available through Tin Soldier over here:
http://tin-soldier.com/sgdp.html
The official Starguard minis have always been 25mm scale, but recently Ground Zero Games released their Brethren of the New Light range.
https://shop.groundzerogames.co.uk/brethen-of-the-new-light.html

They're intended for use as medium-low tech lightly equipped troops belonging to a religious cult, with somewhat basic and even backward weaponry.  Coincidentally, this makes them just about perfect 15mm scale proxies for one Starguard's factions - the Amerons.  Followers of a grim fundamentalist religion that serve as cheap mercenaries to help support their backward colony world, the Amerons are noted for their stubbornness and determination, particularly when facing "unbelievers" - which is basically everyone and everything in the universe except other Amerons.  And they might include some of them too if their battle pastors decide they've caught a hint of heresy or sin.  I've taken some liberties with their TOE, building a platoon of 41 men (they're not noted for being proponents of sexual equality) here split between three squads.
The first two squads are standard light infantry skirmishers operating in groups of thirteen troops, including squad leaders and seconds and a smattering of HAMR and LMG support weapons.  The first ("senior") squad here is generally accompanied by the platoon's pastor, a veteran soldier and elder of the Church who acts as a morale officer. 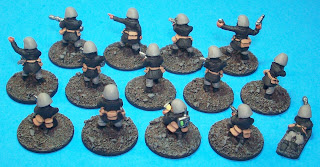 The second ("junior") squad usually contains any newer recruits, and generally acts as a second wave force following up assaults by the first squad.  Sometimes this pattern is reversed, especially when facing situations where extremely heavy resistance is expected.  The platoon's pastor invariably accompanies second squad in this case, partly for the added leadership and morale boost and partly to enforce sanctions for any displays of cowardice or shirking. 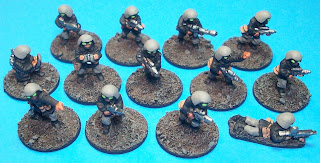 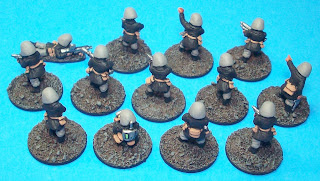 The platoon is generally rounded out by a third squad of specialists, in this case a light artillery support unit.  This particular unit includes a battery of four spigot mortars with a pair of ground mount rocket launchers, each with a two man crew.  They've also had a handcart and a pair of troopers attached for ammunition hauling duties.

"Mule" troopers are generally on punishment detail for some minor disciplinary infraction (major ones are punishable by summary execution) and are not issued weapons.  Most artillery crewmen are similarly unarmed outside of personal holdout weapons, the expectation being that operating a mortar leaves no time to use a rifle that could be better issued elsewhere.  This sort of corner-cutting is common throughout Ameron mercenary units.