Latest commission job, Mudgullet the Froghemoth.  Like all froghemoths, this is inspired by the fantastic Erol Otus illustration in the old Expedition to the Barrier Peaks D&D module.  Not particularly true to the art, but you can still see the roots of the critter under all those spikes. 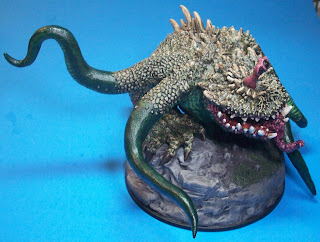 Much like Mashaaf from this earlier post
http://brokenstarsburningships.blogspot.com/2018/02/dreadful-things-mashaaf.html
Mudgullet is one of Reaper's ridiculously huge Bones plastic "miniatures" from one of their Kickstarters (the third, IIRC).  Like Mashaaf it retails for about $30, and is actually a bit more massive. 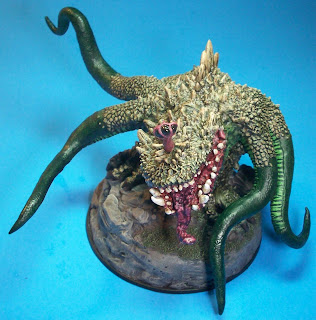 The model comes in 10 pieces - body with tail, two right tentacles, left tentacles as a single part, head, lower jaw, eyestalk, two legs, and scenic base.  Mold lines are minimal, although the tentacles do require some careful cleaning.  Assembly is straightforward but you will have some gaps to fill and a bit of putty work and light sculpting to do to hide joins.  .  All parts are keyed and can't be misaligned, with snug fits.  The end models is quite sturdy and weighs quite a bit for Bones plastic. 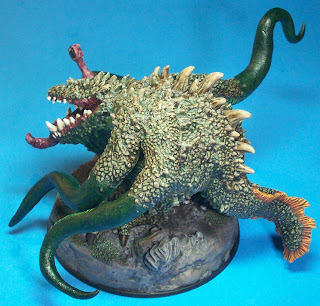 My primary complaint with the model is the overall sculpt and the scenic base.  The tail and lowest tentacle are FAR below "ground level" on the stock base, which results in them scraping the table badly when mounted on the base.  This is ruinous to any paint job in the long run and wholly unacceptable.  Unlike many Bones kits re-posing the parts with the "hot water bath" trick isn't really an option here.  The problem tentacle might be bent up enough to get above the plane of the table, but the tail cannot be, and tilting the figure far enough forward on the base to raise the tail produces a very poor fit in the base sockets and a clumsy pose overall. 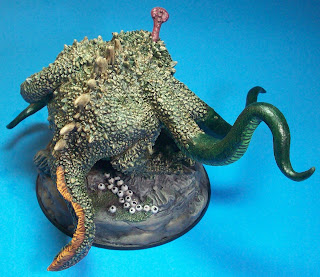 The solution I came up with was to take a 120mm hard plastic base and build an extra half inch or so of elevation below the scenic base, sculpting it to look a huge raised mass of stone.  This (barely) gets the trailing parts up to a safe level to prevent scraping during use. Pretty annoying, frankly, and it used rather a lot of scrap plastic (notably unused bases from the kajillion Toad Demons I've built over the years) and sculpting putty to accomplish. 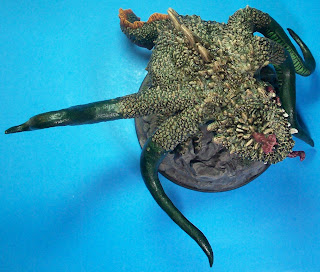 The final effect is okay, and doesn't look too unnatural.  The added height certainly makes an already-gigantic model all the more menacing. 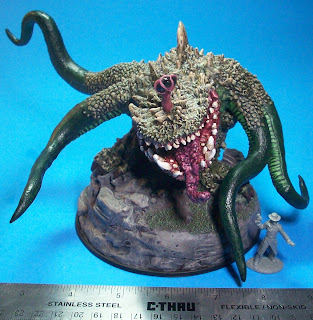 I haven't glued the figure to its base yet, and it doesn't really need it as the fit is very good and it's solid as-is despite the weight of both mini and custom base. 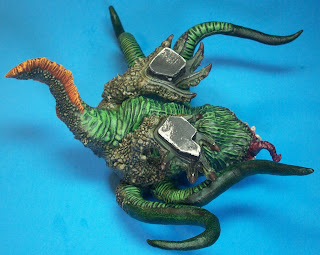 Yes, they're frog eggs on the scenic base, not eyeballs.  Best I can do at painting opaque plastic as (mostly) clear eggs. 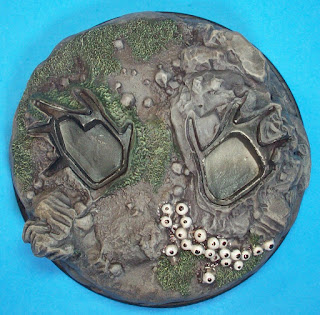 A face only a mother could love.  The mouth detail on the figure is one of the better aspects of the sculpt. 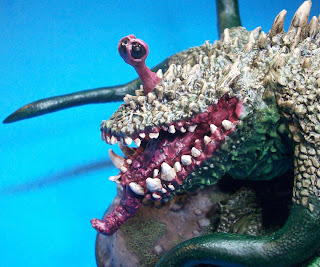 Overall the model is a bargain for its size and level of detail and avoids most of the "bendy plastic" pitfalls some Bones models suffer from.  The scenic base's bad fit for the sculpt is disappointing but fixable.  If nothing else it's certainly the largest and most intimidating froghemoth sculpt of the four I know of currently on the market.