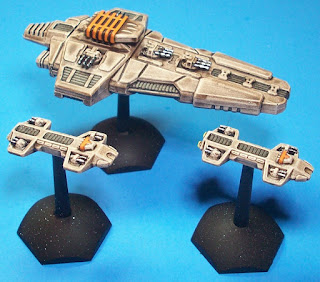 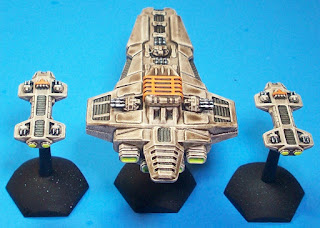 While the posts seem to be pretty popular (at least judging by how many hits they've had) there have been a few complaints.

Apparently some people flat-out refuse to use salvo missile systems for a variety of reasons. 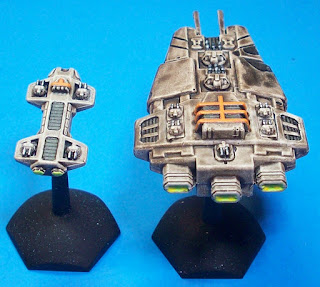 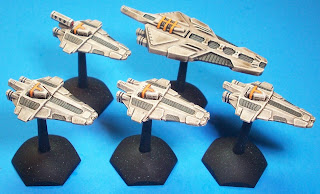 Since I deliberately built the fleet to showcase heavy rack missile armaments, it doesn't work very well as written for these folks. 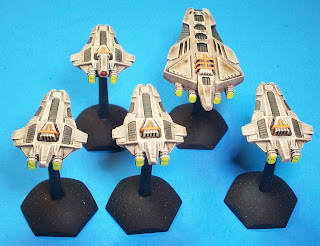 Now, I admit missile racks worry me a bit sometimes as well, and I'm an obliging guy, so here's a proposal to modify the previous statistics so they use fewer salvo missiles, including the option to swap them out entirely. 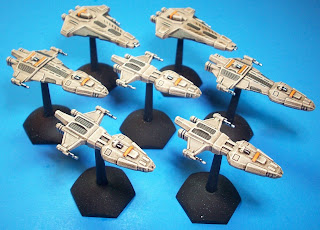 The variant is simple:  Take any salvo missile rack a EuroFed ship mounts and replace it with four submunition packs.  Costs and Mass remain the same.  You can change out some, none or all of the racks as desired.  The resulting ships will still have the same overall tactic of "one big shot and then decide whether to stay and fight or run away" but getting that shot off becomes harder and puts you more at risk.  On the plus side, you can stop caring about point defense and you'll probably appreciate that big Thrust 6 rating even more than you used to. 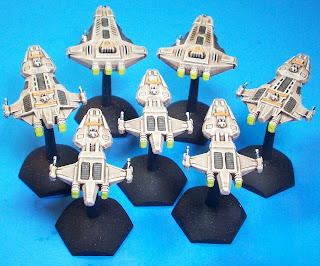 Submunitions have a single 60 degree arc of fire.  The four packs that replace each missile rack should have the "center" firing arc of the three the rack had.  In most cases this will be the Front arc, although there are exceptions.  The Abruzzi, for ex, would have the "wing" racks centered Front-Starboard or Front-Port. 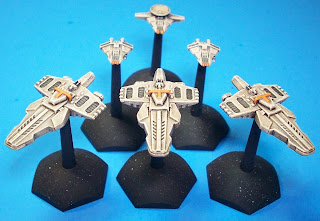 Some folks use the Continuum rules, which give submunitions 180 firing arcs for no extra cost.  I don't think that's very balanced personally, but if you're doing that you can just use the same firing arcs for both racks and packs here. 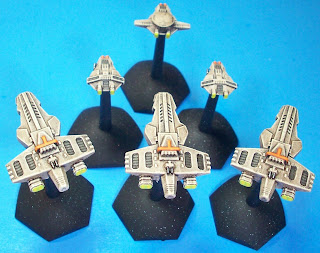 The background fluff for this swap goes like this:
As time went by the EuroFed High Command found their commitment to extensive missile armament increasingly problematic.  Modern NAC and NSL ship designs were employing heavier and heavier fleet defense systems and individual point defense arrays, making it harder and harder to deliver crippling strikes.  Worse, the Xeno War brought EuroFed forces into direct conflict with alien technology that was even more effective at stopping massed missile attacks.  Kra'Vak scatterguns had limited ammunition, but it was generally more than sufficient to pull the teeth of human missile and fighter strikes. 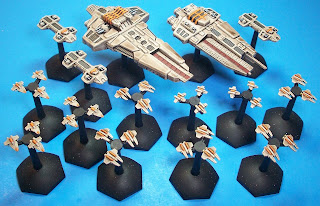 In response, Fleet R&D developed the "Carreau" hypervelocity submunition.  These small semi-guided missiles were designed to replace the larger shipkiller warheads used by conventional seeker missiles used by the fleet, with half a dozen submunitions in each missile's alternate payload.  Carreaux were equipped with overpowered ultra-short-ranged "sprint" drives and relied on kinetic impact rather than explosive charges to inflict damage.  The combination of high final approach speed and lack of a warhead to detonate made the submunitions effectively invulnerable to point defense weaponry, although it also reduced range and accuracy to an extreme degree. 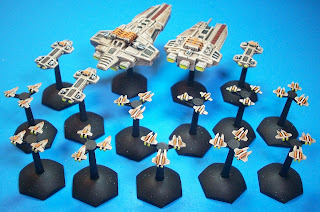 So, in this variant, the missile racks are still there, but their payload has been swapped out with shorter ranged submunition-pack carriers that aren't affected by PDS fire due to speed, numbers, and being a solid chunk of metal rather than a shaped-charge penetrator warhead.  If you want to be "realistic" about things you might require all four submunition packs that replace a single salvo rack to fire all at once and at a single target, but that's up to you and might be too limiting.