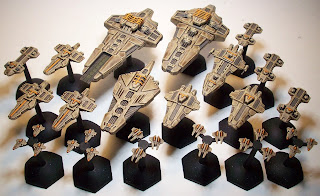 Brigade Models' has recently resculpted their EuroFed miniatures range, which replace their older models seen here:
http://fullthrust.star-ranger.com/BSBSEuroFedstats.htm
Although they share the same names and much of the design style, the new models currently lack stats for Full Thrust.  Having done the originals years ago, I'm taking a shot at covering them under the Full Thrust/Fleet Book 1 & 2 rules from Ground Zero Games, which are available as free downloads here:

http://www.brigademodels.co.uk/Spaceships/EuroFed.html
EDIT 10/14/2018 I've done a newer version of this article with most of the more recent minis from the range covered in the same way, which can be found here:
https://brokenstarsburningships.blogspot.com/2018/10/european-federation-fleet-statistics.html
I'm using one "house rule" with them, mostly to make them a little more unique and to match the Brigade fighter basing style better.

EuroFed fighters operate in groups of 3 ("triads") rather than the more common squadrons of 6 used by most spacefaring powers.  This has some small advantages (PD fire and dogfights are more likely to waste hits on overkill, and they'll have more options about where to move their fighters) but it also has the drawback of less efficient use of hanger space.  Each triad requires 5 Mass for hanger space, which is priced as normal (3 points per Mass for NPV users, 1 point per Mass for CPV users).  When paying for the fighters themselves (as you do under the CPV system) each triad costs half what a six-fighter squadron does.

I'm sticking pretty close to the original concept I used with the old sculpts, which had them using lots of missile racks and their high thrust to avoid fights they can't win.  The new stats push this even further, with more missiles and more long-range beams to let them play sniper/keep-away more efficiently.  They have several quirky weapon layouts to fit the models better (love that aft turret on the Insidioso) and I've tweaked masses a bit, but in general they should play much like they used to - which is a lot like the FB1 FSE does. 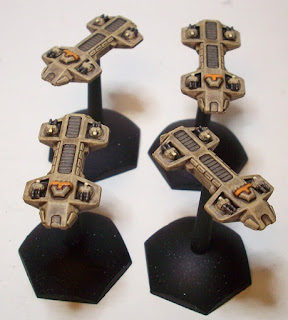 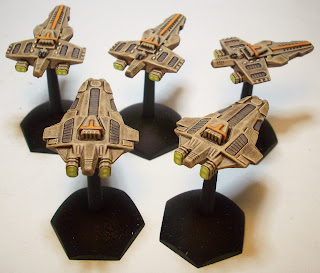 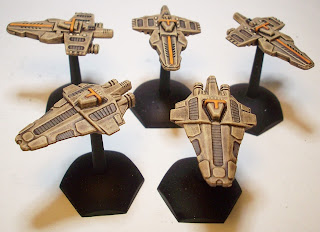 
A very specialized destroyer, the Surcouf is almost a pure missile boat.  Her salvo racks can kill targets many times her mass but she has very little punch remaining after launch.  Their own missile defense are also quite light, and most Surcouf squadrons have at least one El Malin assigned as a dedicated escort. 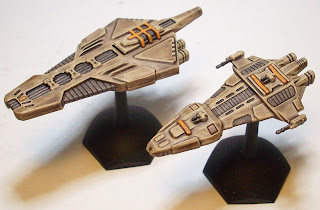 A potent medium-weight cruiser design, the Tigre class sports better beam weaponry than most EuroFed designs.  Her twin heavy beam mounts are quite powerful, and their novel fore-and-aft gun mounts save a great deal of mass and cost over conventional turret arrays. 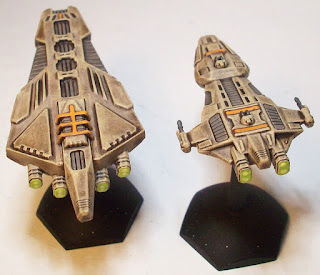 The Abruzzi is another specialist design, a "Big Brother" to the Surcouf class.  Her missile load is amazing for her size, by far the heaviest in the entire fleet.  This comes at a hefty cost as the ship's beam firepower is minimal and her defenses are lackluster as well.

Big, fast, and powerfully armed, the Milano is the backbone of many EuroFed battlegroups.  Her missile launches are some of the most impressive in the fleet, and she also carries a heavy array of long-ranged beams.  The lack of close-in armament is not seen as a drawback and their captains generally excel at careful maneuver and standoff combat, keeping their distance until their foes are worn down too much to resist. 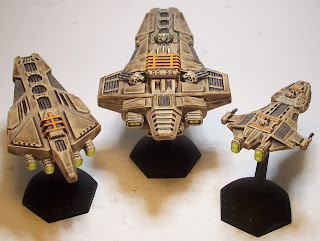 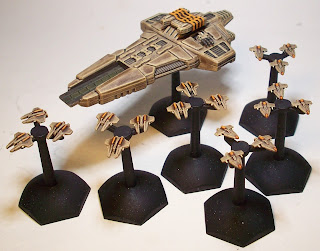 Umberto-class battlecarriers are multirole combat ships designed to swamp enemy point defenses with combined fighter and missile strikes while providing beam fire from long range.  They are effective but rather expensive, and are consequently somewhat rare.  Battlecarriers are rarely if ever seen without at least one Le Malin in support. 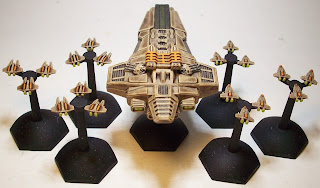