Well, it's 2020 now.  Still no moonbase, humanity hasn't set foot on Mars, and not a peep out of the aliens my childhood assured us would be showing up to invade or offer us a spot in Galactic Civilization.  The present is a thoroughly disappointing future.

So let's look back six years at some aliens that came and went. 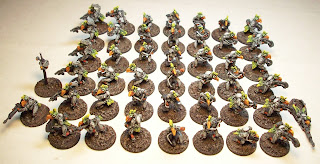 These are the Harook, a set of 15mm scale avian aliens that originally came out from Mad Robot Miniatures.  They were later sold to Skullduggery Press, where they have languished, unreleased and out of production for half a decade or more.  Skullduggery hasn't had an update on their Facebook page in since 2017, and that had nothing to do with the Harook.  So, not holding my breath on ever seeing these for sale again, which is really a shame.  They're very well made and deserved a better fate than they got.

The line consisted of a mix of infantry troopers, a couple of special weapon birds, a couple of command figs, a pair of snipers, and a rather nifty spotter drone.  Most of the ones I've seen painted up are done to resemble vultures, which is probably what the sculptor was shooting for.  I decided to be different, and went for a parrot-inspired scheme.

They wear light hardsuit armor and carry what were probably energy weapons of some kind.  In Stargrunt terms, I'd give them d8 armor and FP3 personal weapons with a d8 impact die, on the assumption that alien-tech zap guns should be fairly effective. 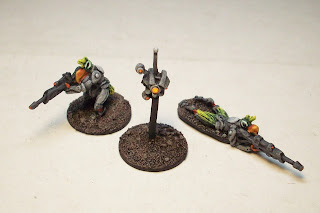 The aforementioned snipers, which i think were sold in a three-pack with the drone.  For Stargrunt, treat as laser sniper rifles, and the drone lets you treat the target as being one range band closer or cancels one die shift for cover.  It counts as part of the 3-model unit, has d8 armor, and is destroyed outright if damaged. 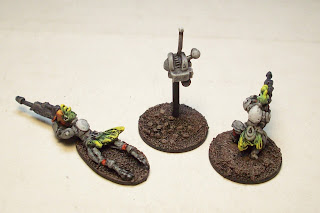 Think these were all the standard infantry sculpts.

The "shell" backplates could be personal shield generators of some kind if you wanted them to a bit tougher than they look at first glance.  If taking that approach, add +1 to their armor checks, giving a result from 2-9.  The  spotter drones would have this built in as well.

Here's the leader and special weapon sculpts, as well as another look at the snipers and drone.  The specials are stock plasma guns per the Stargrunt rules.

Always assumed the servo-arm thing on the leaders was some kind of target designator or fancy sensor array, or both.  I'd let leaders act as forward observers for calling in artillery, orbital bombardment, or missile strikes from off-table support elements. 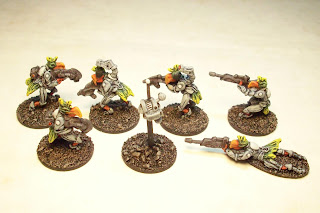 Scale shot with a Tomorrow's War fig from Groud Zero Games.  As you can see, the Harook are pretty tall but slender even in their armor.

Good luck finding these for sale at this point, but maybe they'll get rescued from oblivion some day.  One can always hope - and maybe we'll get that invite to the interstellar community yet.  :)