Some rarely-seen ships from the A Call To Arms: Noble Armada Kurgan range, which came out toward the later part of the game's existence.  Regrettably, I never managed to get the heavier ships in the range, so we're stuck with images from the lighter elements of the fleet.  The game is long dead at this point, and unlike ACTA Babylon 5 it doesn't seem to have a lingering fan base, but I'm still going to waste time talking about the way these ships worked in ACTA NA.  Feel free to skip the commentary and just look at the pictures if that's not of interest. 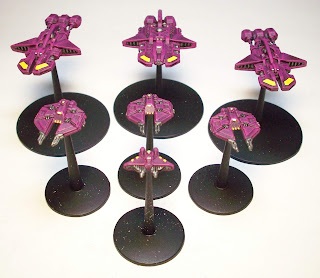 The Kurgan rules appeared in the Fleets of the Fading Suns book.  They're one of the setting's "barbarian" powers from beyond the region of space dominated by the Empire with the grudging cooperation of the Church of the Pancreator, the Guilds, and the Noble Houses.  This is pretty amusing from the Kurgan point of view, since they regard themselves as being at least as advanced as the Empire, and certainly they see their society and religion as being obviously superior. 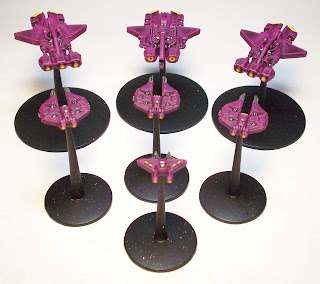 The Kurgan fleet has many similarities to the forces of the Al-Malik Noble House, in that they rely exclusively on weaponry that bypasses shields due to the Slow trait.  The Kurgan do mount a fair number of rockets and some missiles and torpedoes, but not as many as the Al-Malik do.  Instead, their ships also carry a weapon called the heat blaster.  These are also widely used by the Church (for burning heretics, predictably) and are otherwise something of a rare technology in most of Imperial Space. 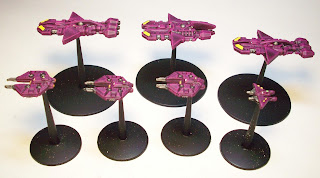 Heat blasters are a bit shorter ranged than the standard blasters are (15/20/30 for light/medium/heavy) and do less damage at the low end of the scale (1/2/3).  They lack the Burn-Out trait but gain Slow, so rather than knocking down shields briefly they simply bypass them and hit the hull directly.  They also gain the Inaccurate trait when firing at a ship with active shields, and the fleet has almost no way to knock down shields (pretty much just crit effects) so they almost always suffer from a -1 to hit.  If a Heat Blaster scores any crits at all, you also increase the Crew crit location track by one.  So, they struggle to hit reliably but all the damage goes to hull, and any crits roast crew on top of their other effects.  Depending on how their crit rolls go, they may be extremely deadly, but general damage output is behind the very similar Al-Malik (at least barring a heavy point defense laser environment, which is rare).  This is exacerbated by the lack of any Kurgan ships with the Scout trait, something the Al-Malik make excellent use of. 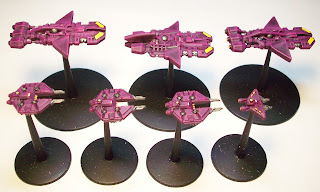 Aside from the heat blasters, the Kurgan also have some other quirks.  Their ships, class for class, have more starting hull than other fleets.  The exact amount varies but averages between 20-25% extra.  This makes them quite tough, although it's overkill in some cases.  Their dreadnought has 90 hull rather than the more normal 75, but by the time you get anywhere near that you'll be nearly wrecked by critical effects in most cases.  Still a definite plus for them, though. 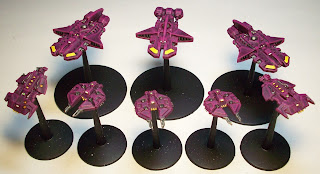 Their ships also run a bit heavy on troops, rivaling the Hazat fleet on some ships.  They have access to both Elite and "Grimson" (power armor Marauders) troops as upgrades, putting them ahead of many Noble Houses in that regard.  Speeds are middling-high, with many ships moving 12 and none below 8, with average agility for their class.  Their boarding game can certainly be quite a threat, especially with the lighter, faster ships operating in packs. 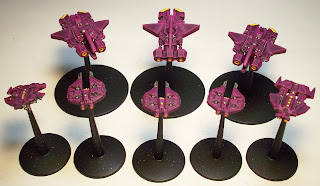 Another noteworthy feature is their carrier and attack craft selection.  Their Khabir light carrier is fairly average for its type, but has the vital Command +1 trait.  They also have the huge Arigaba carrier with 16 craft capacity, although its guns are light for its (cruiser) size and it still only has Command +1.  Unusually, their Kublai dreadnought also has a small 4 craft attack wing, although they're primarily a gun platform and lack the Command trait.  Expect to see at least one carrier in a Kurgan fleet, especially since the Fleets book made everyone's carriers actually worth taking.

The fleet also has a weird mix of attack craft.  They have three  types to choose from.  One is a specialist interceptor with a +2 dogfight mod, something rivaled only by the Al-Malik fleet.  They also have an actual multi-role fighter/bomber, something no other force can claim.  These carry a single microtorp for attacking ships while retaining a high speed, good defenses, and a +1 dogfight mod, which is huge for an offensive craft.  Finally, they have a "suicide fighter" (something they share with the loons of the Church fleet) that is a one-shot flying bomb that dies when it attacks, but combines a raft of weapon traits:  Accurate, Devastating +1, Guided, Multihit d6, One-Shot, and Slow.  They can only attack once and then they're removed whether they hit or miss and they have a horrid -2 dogfight mod and mediocre defenses, but if they connect they're serious bad news. 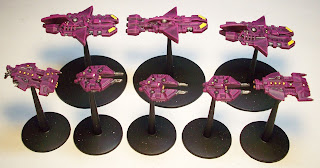 The fleet has a base tactics score of +1, and can buy psychic crews for a small discount.  Nowhere near as powerful as theurgy or the Vuldrok-only rune powers, but still good for some tricks.  Notably, occult powers are the only way the fleet can get access to the Scout trait anywhere - so expect that to get countered every single time.  Their ships are uniformly a bit cheaper than you'd expect for their class as well, so it's not uncommon to be outnumbered or outclassed a bit when facing them.  Their main weaknesses are their generally short weapon ranges and extremely erratic damage output, which is definitely behind the Noble House forces most of the time.  That can change real quick if they do manage to get a psychic Scout going, so watch out for that.

Another group, same as the first 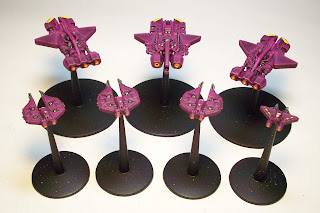 Standout classes for me are:
The Yildugh destroyer, which is fast, very tough and has 10 troops, but has an awful weapons load - more than made up for by the 150 point cost, which is a large bargain.  Most Noble House destroyers saw a price increase to 200-220 points in the fleets book, making that discount even more significant.
The Qawwas frigate, only 90 points and almost as well armed as an Al-Malik frigate, with a huge 8 troops on board and speed 12 to boot.  Easily a rival to the excellent Hazat frigate, albeit not quite as good at shooting.
The Kublai dreadnought is a cheap dreadnought for 550 points, leaving you some extra to load offensive fighters and/or better troops.  Rather than wasting space on a heavy meson cannon it carries three torpedo turrets, cranking out 9 AD per turn and giving the fleet one ship that can really reach out and accurately smack something hard, and it mounts significant heat blaster broadsides as well. 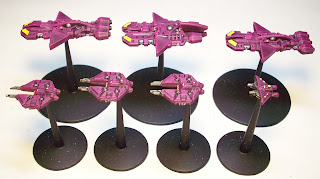 Is the fleet balanced?  Maybe.  Didn't get to play them much before the game died.  They look okay on paper, and are nicely different from any of the original fleets.  Mongoose was never noted for good playtesting and point balancing in this game, though.  Suppose I'll never know, sadly. 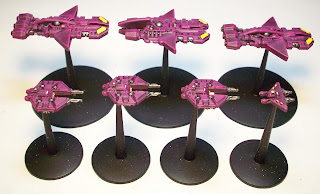 But at least the minis are pretty.  Maybe Ral Partha Europe will get the molds sorted out and back in production someday.  They'd look nice flying in Full Thrust or Starmada games.
Posted by Dick McGee at 6:45 AM