Combat Wombat has been out of business for years now, and his old range languishes in limbo over at Skullduggery Press, but several people were wishing for images of the models for posterity's sake.  Some digging around in old photos (over a decade now, in some cases) turned up a few, at least.  No idea what these were called in the original catalog, but at least they're photos.
Some light grav tanks, most converted with a Rebel Miniatures Grey in the commander's hatch and added flight bases. 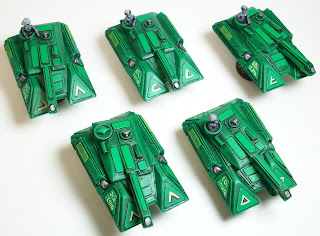 The turrets were drilled and pinned to let them rotate, and the bases were left unglued for ease of transport. 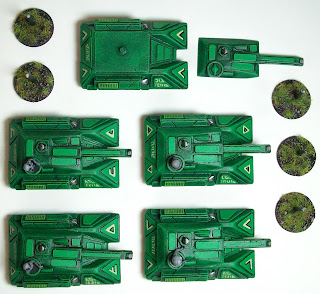 Some heavy hover tanks and a mobile artillery blower to go with them.  Think they shared some components, and the gun barrels are the signature turned-aluminum ones CW was so generous with. 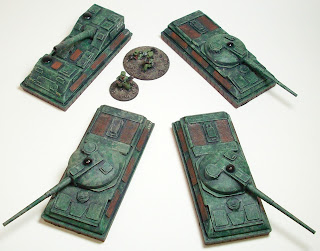 I was definitely thinking Hammer's Slammers when I gave them all names.  Artillery hogs are apparently my spirit animal.

These were IFVs, and shared design features with a small family of models, including an APC and a smaller version as some kind of recon scout IIRC.

Probably some minor conversions to the turrets, but I can't swear to it.