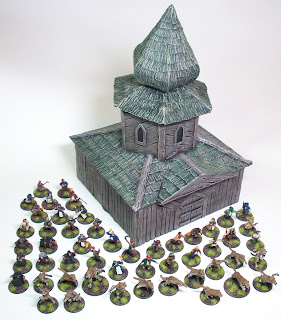 The basic concept was a scenario with a table mostly covered in dense woods, with a big Eastern European fantasy church near the center and various roads and smaller trails running throughout.  Night has fallen and the full moon is coming up, and a large pack of werewolves has attacked the nearby (off-map) village.  The populace has fled to seek shelter in the church, the lycanthropes being unable to enter consecrated ground. 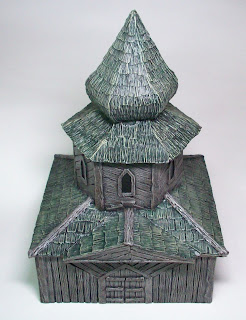 The mob of villagers came in from one table edge and had to make their toward the church, arriving slowly in random numbers over several turns.  Meanwhile some of the werewolves have spread out through the woods and are hunting the fleeing survivors, and more of them will appear behind the villagers from the road back to town. 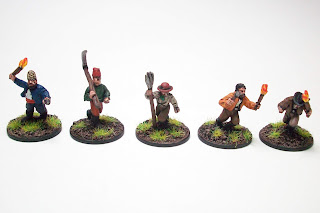 The villagers are armed with a mix of weapons, farm tools, and torches.  The latter were important to have in a group since movement and combat were improved by light sources, while the werewolves are stronger and faster in the dark.  Victory was determined by how many villagers reach the church, with bonuses for the rare werewolf kill.  The poor peasants aren't carrying silver and are no match for their hunters one on one, but if you stick enough pitchforks into a lone wolf and then set it on fire, they can be killed. 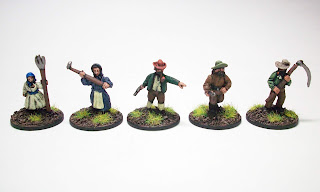 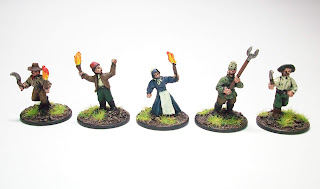 Aside from their use in "Hollywood horror" games, they'd be handy for civilian militia in various historical scenarios. 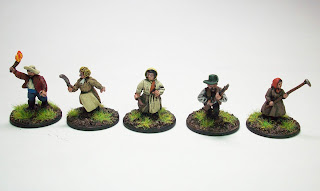 Nice to see a good mix of male and female figures in the range, too. 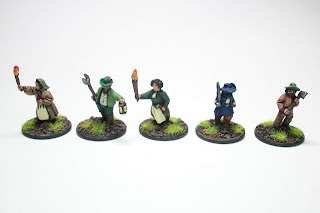 Also useful in generic fantasy games, of course.  Sometimes you just have to drive off the orc raiders yourselves. 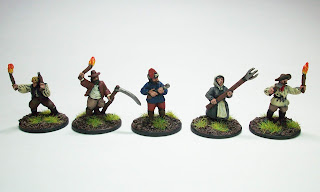 There aren't as many werewolf sculpts, but they're still nicely varied. 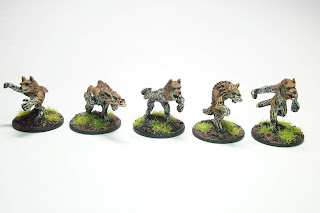 No duplicates at all in the set. 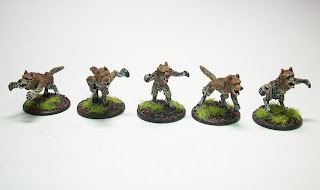 I like the mix of stances, too.  You could add to the mix with regular wolves, obviously. 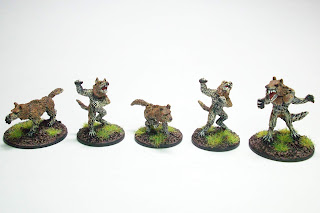 The scenario also had optional rules for including witches or crones to one side or the other.  Can't remember the mechanics after all these years, but I recall they were slow but provided bonuses to friends or debuffs to nearby enemies.  There are six different sculpts for them, this first lot being the monotonously-dressed witches. 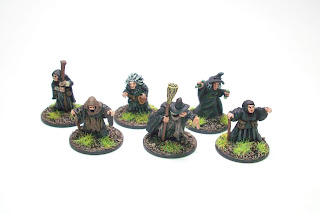 The crones or wise women got a more varied palette, in keeping with the rest of the villagers. 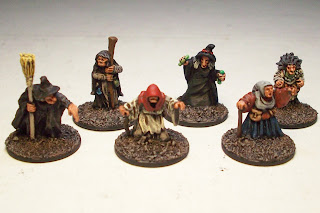 Sadly, these are the only figs I've got a rear shot of. 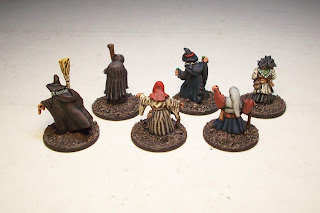 Particularly fond of these sculpts, they have a lot of personality. 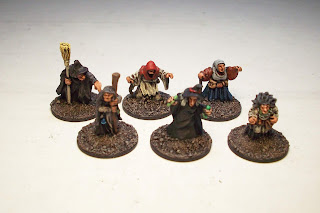 And yes, the one does appear to be holding a frog, or possibly a newt. 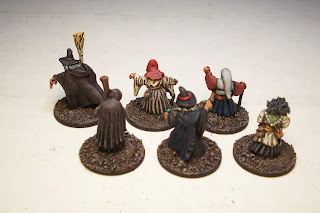 Sadly, my friend died after a lengthy illness a few years back.  I have no idea what wound up happening to his rules project.  We playtested it four times that I recall, and he had some other scenarios in the works, but as far as I know nothing ever came of it beyond the few games I was involved with.