Taking a look at Old Glory's 28mm scale modular robot set today, with some images dating back to 2012 (and painted even earlier). 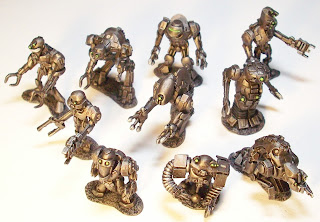 You can find the unpainted version on their store here:
https://www.oldglory25s.com/view_product.php?product=BMM-144

The full set gives you 13 different bodies and enough arms and heads to leave you with plenty of spares when you've assembled everything. 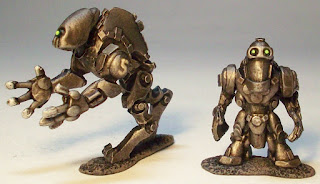 They theoretically cost $43 and can be purchased that way, but they're part of their collection of free figures that you get when signing up for their Old Glory Army deal:
https://www.oldglory25s.com/view_product.php?product=OGAC 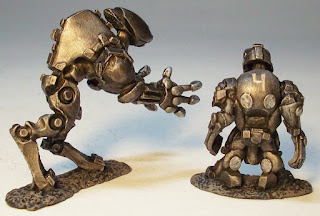 So, you could pay $50, get a 40% discount on most of the figures they make for a year, and get this set of figures for free. 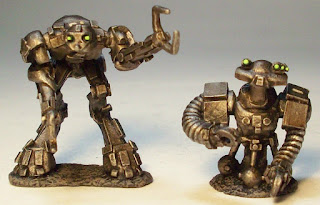 That's quite a bit like paying a net $7 for a year's worth of 40% off on whatever else you order from them. 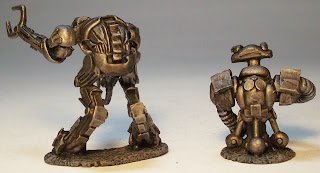 Kind of obviously a good deal, so a suspect they don't actually sell many of these sets at retail. 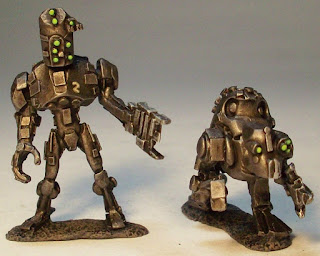 The models are nicely varied and depending on how you paint them, the sculpts will feel either retro-sci, Star Wars-ish, or (as I was shooting for with these ten) a grungy low-budget Ice Pirate kind of vibe. 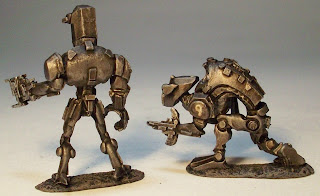 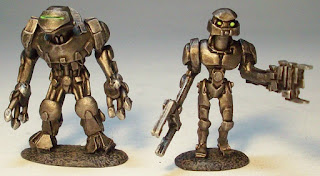 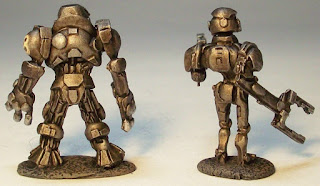 Not out of place in near-future post-Apocalypse settings either, although you might want to convert them to be more beat-up in that case. 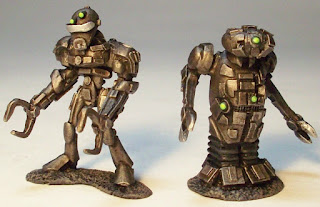 Bit harder to use them in mass combat scifi since you really can't get whole units of the same body design easily. 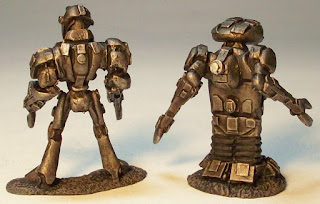 Suppose you could have a heterogenous squad of them for that, but there are better options for "trooper" bots IMO:
https://brokenstarsburningships.blogspot.com/2018/03/dance-puppets-deadzone-marionette-kit.html
More of a Lost In Space feel on this one, with perhaps a nod to Robby from Forbidden Planet.  IIRC this is the only body variant that doesn't have a separate head. 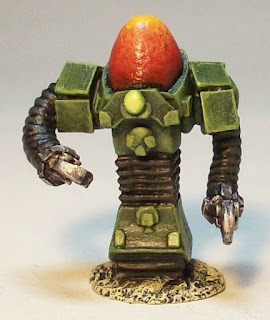 I like the way the sculpt evokes that feel (especially with that those arms) without being a direct knockoff. 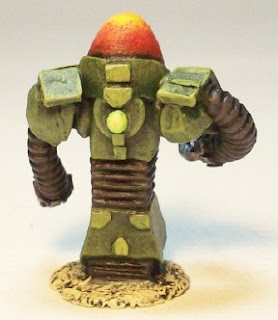 Some of them really scale-jump to 15mm well, as this shot of two robo-gladiators with some 15mm Ground Zero Games figs acting as their tech support staff. 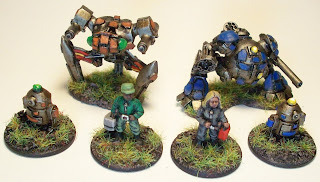 Particularly fond of the orange tripod design here, even my 8 year old paint job and photography doesn't really do it justice. 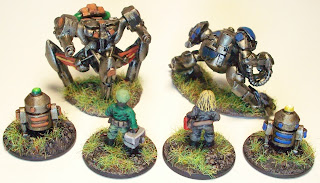 Think I've done three sets of these over the years, and the many spare parts that's generated have helped with quite a bit of kitbashing as well.