Mantic Games' Asterian Marionette box has gradually become one of my favorite gaming kits to come out in the last few years.  Not so much because of their usefulness in the Deadzone or Warpath games they were made for, but because the figures are so very useful for other purposes.  Whether you want droids for Star Wars, minions for an evil mastermind supervillain, ancient robots guarding a post-Apocalyptic ruin, or alien autosoldiers, they have something to offer.
The box is intended to build ten "Marionettes" (which are some kind of remote-operated humanoid combat robot) and a pair of grav-mobile hovering support drones.  Parts are included to let you build two special weapon Marionettes, two leaders, and any of three different types of drones.  I've pretty much ignored the intended build since word one. 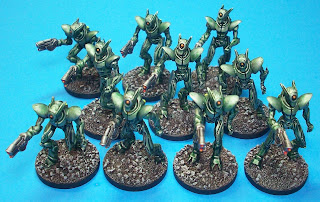 These are the "stock" Marionette trooper models.

They're fairly simple to assemble, and require minimum cleanup.

Each box comes with two identical frames, with (oddly) the body/leg pieces in separate little baggies.

This is a kitbash of one of the drones, with spare arms from a Marionette added, a left-hand gun added (which requires a clip job and some patience) and the "wings" inverted. 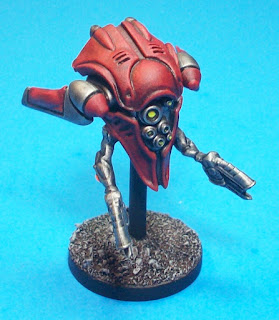 Quite fond of adding arms to these drones, as you'll see. 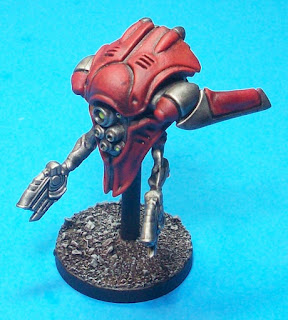 They're pretty much entirely made of spares from the sprue, depending on which drone you choose to build (think the base body here is the communications variant). 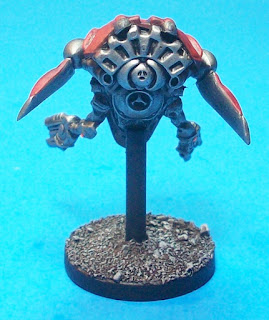 And another kitbash, this one with a sniper rifle arm pair attached and the same inverted wings. 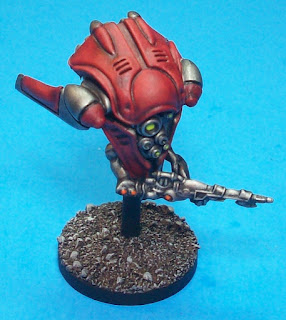 All of the Marionette special weapons figs use the same left arm, with the left hand molded on to the weapon itself. 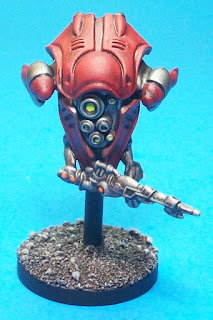 Floating sniper drones strike me as a terrifying prospect. 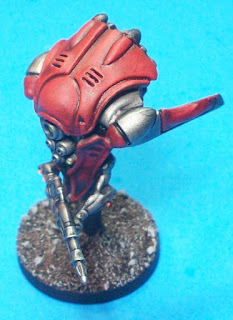 This squad uses the "command upgrade" parts from several boxes of Marionettes, giving them distinct heads and backpacks. 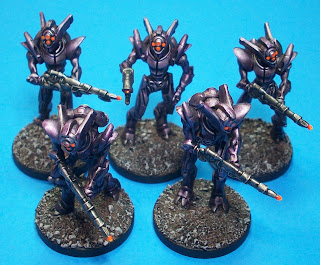 The "command gun arm" has a short bayonet attached as well, and the left arm in that pair has slightly different detailing than the trooper version. 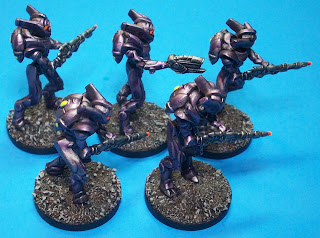 There are those backpacks, which could probably be painted up as grav flight packs if desired. 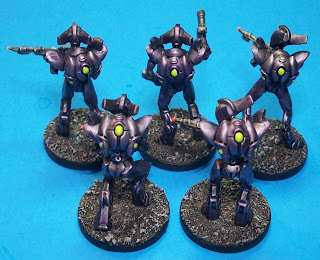 Here's a unit of modified floating drones, all with added arms and modified flight stands cribbed from Warlord games figs. 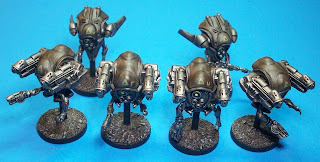 The armored gunners make up the bulk of the squad. 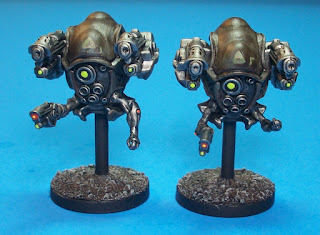 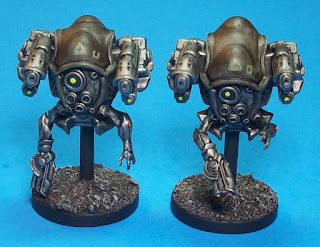 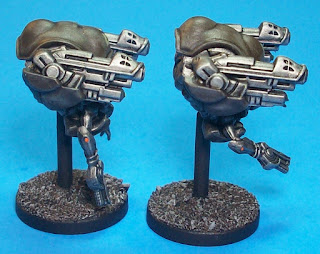 While we also have two "high mobility" frames with a blaster carbine and a sniper rifle. 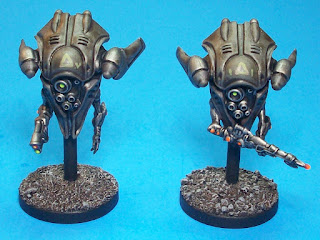 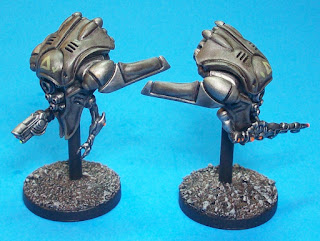 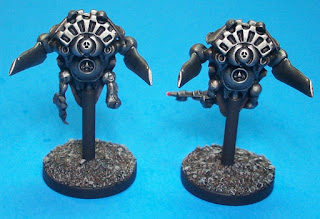 You could build these out of a box and half worth of parts in a pinch, although it would limit your build options on the Marionettes a bit if you did so. 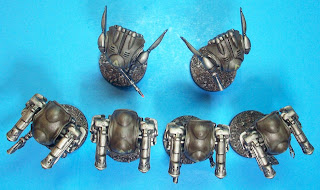 This is one of the few "stock" drones I've built, with the added "floaty bits" widget stuck on below the chassis and the teeny-tiny secondary guns in the lower sockets. 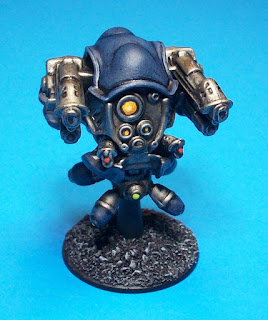 I prefer using the arms to the guns, obviously. 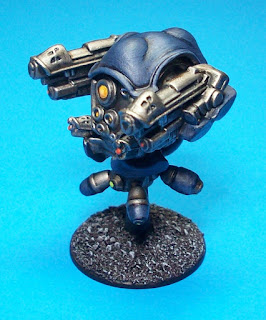 Comparison shot with a stock gun drone and a Marionette. 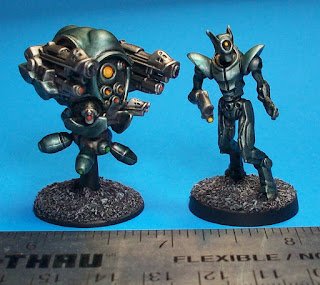 As you can see, the drones are pretty chunky. 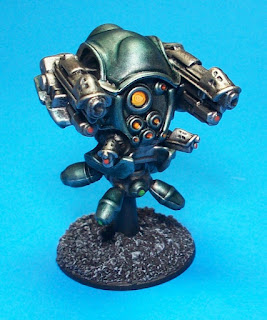 This is a full squad in game terms, complete with support drone and command and heavy weapon variants. 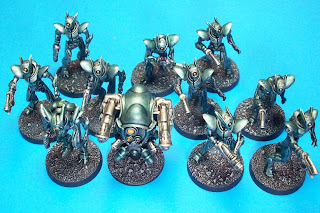 The commo drone chassis is different from the gun drone, and IMO makes a nice spaceship hull. 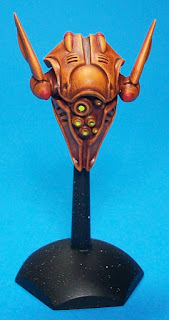 A more elaborate kitbash on a gun drone chassis, with tentacles and sockets from the bits box added. 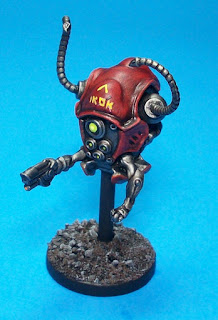 I really like these variants, they remind me of the descriptions of Gamma World and Barrier Peaks robots from the old days of TSR. 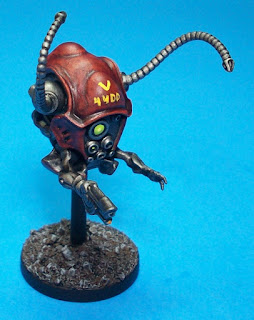 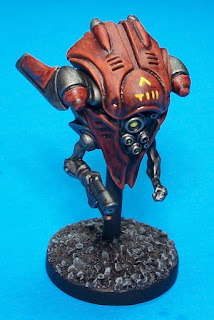 This pair had the shoulder pad/socket fittings from a command Marionette added. 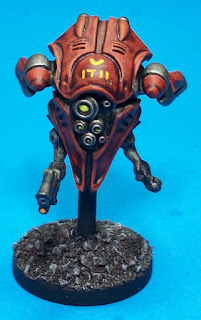 I've been hoarding the "floaty bit" pieces from the drone chassis for use as these little guys, which also have guns cribbed from the gun drones and low-level Brigade Models' flight posts added.

This is four boxes worth of parts here.

I intended them for use as 6mm grav tanks with a zippy anime feel to them.

They remind me a bit of Bonaparte from Dominion Tank Police, if he got an mobility upgrade.

They also scale jump well, and could be slightly bigger than man-sized 15mm drones or small 28mm scale remotes for a Shadowrun rigger to operate. 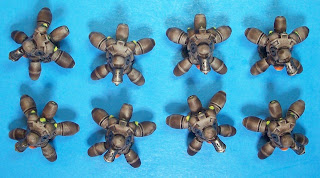