Stargrunt 15mm Alien Light Mecha Lance (or are they 28mm Combat Robots?) plus some Crusties/Prawns

Another showcase of some of Ground Zero Games' excellent Crusty alien range.  To start with, here's a lance of their light mecha. 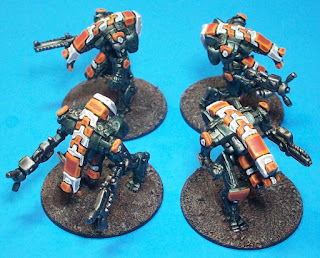 These are great models, although they do require a bit of mold line cleanup before painting and can be a little fiddly to assemble. 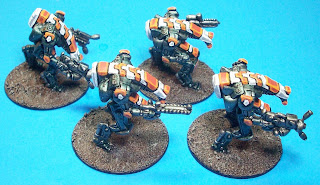 Worth mentioning that they come with a plethora of extra arms, so you have quite a few weapon options including unarmed empty fist arms. 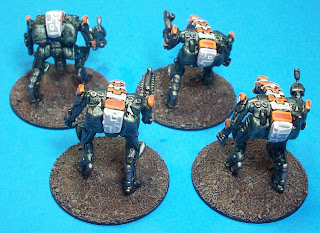 This leaves you with some spares, which are useful bits box items for later builds and kitbashing, especially since they're well-sized for use as 28mm scale cyber prostheses or robot limbs. 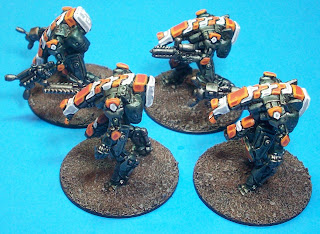 There are also two different leg pairings, and you could probably swap between pairs for even more stance variety by adding rocks or wreckage to the base to stand on. 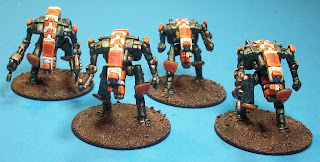 The bodies can also be positioned looking level, up, or down (as the two-gun build in this set is). 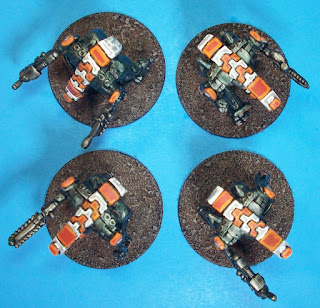 They're also uncommonly good scale jumpers and make perfectly acceptable wardroids in 28mm scale gaming, as well as being intimidatingly big in 15mm. 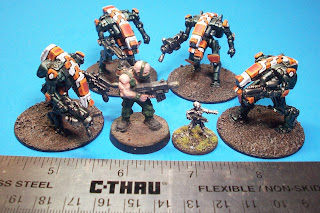 John also makes a wide variety of Crusty infantry figs, including gun teams, command figs, civilians, heavy weapon carriers, and alien critters large and small.  I showcased the armored infantry in an earlier post http://brokenstarsburningships.blogspot.com/2018/02/stargrunt-15mm-armored-alien-infantry.html but here's a sample of the "naked" versions. 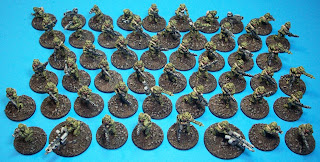 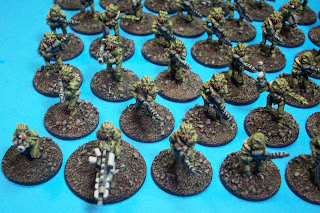 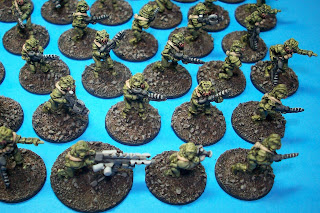 And here's a few of the bug critters and a couple of handler/civilian figs.  The bigger horsebugs are designed as cavalry mounts and are sold with riders, but I'm using them here as alien livestock.  Have to get around to doing some cowboy Prawns eventually.