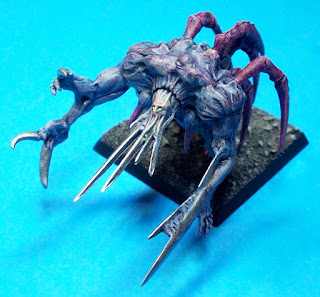 Stabface came into existence only yesterday, after I found a mostly-unassembled Chaos Spawn sprue and some spare parts in a box with Yattaraxaxax.  He's still a little busy, but I like the nutty "running face first into the foe" vibe he wound up with. 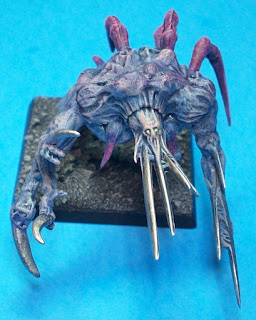 The Chaos Spawn kit is a minor gold mine of spare parts if you need eyeballs, tentacles, insectoid limbs, and odd heads. 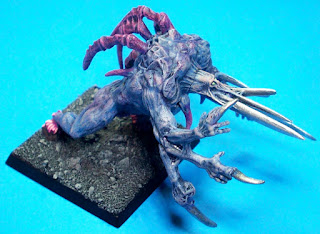 What keeps it from being excellent is the bodies. 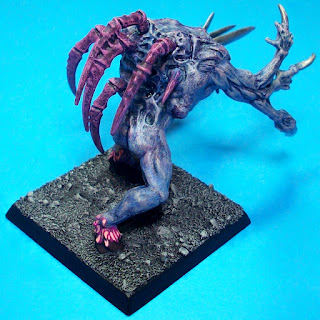 The kit comes with two of them, both boringly humanoid and in nearly identical "lunging forward" stances. 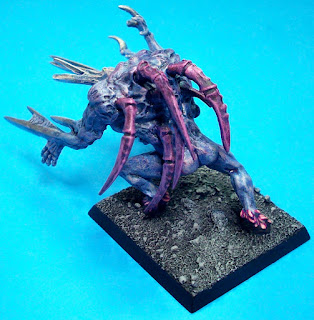 You can vary their end appearance a lot by selecting different arms, heads, and other add-ons, but without quite a lot of cutting or scratchbuilding there are still just the two core bodies underneath it all. 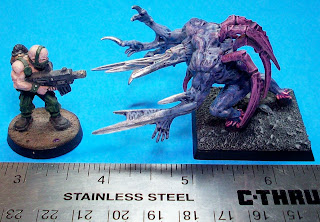 No variant legs, no distinct stances, no multi-legged horrors or legs slithering, oozing horrors straight out of the box.  It's still a good kit, but the lack of truly crazy versatility for folks not interested in sculpting leaves it at a solid B+ grade, especially since Spawn in Warhammer are supposed to be numerous and infinitely varied. 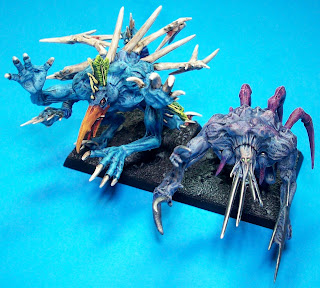 Doesn't help that it's very easy to build Spawn that can't rank up base-to-base, and almost all of them will overlap the front of the base by a lot, making it hard to get into contact with enemy models as required by the game rules.  This isn't as much of an issue in Warhammer 40,000 or Age of Sigmar, but these figures were designed during the days of Warhammer Fantasy and intended for use there. 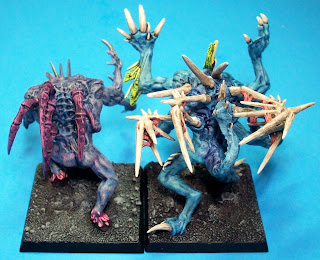 Still, you can make at least a couple of really unique (if mildly silly and over the top) Chaos Spawn without any conversion work needed.  The huge number of spares you'll wind up with is also a plus, although that's getting to be the norm with modern GW kits.  Maybe someday they'll do a new Spawn kit and we'll see something that really deserves an A+ grade, but as it is they're still fine, just not everything they could be.