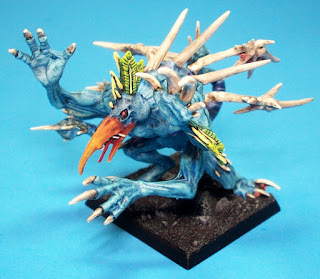 A few years back one of my friends asked me if I could paint up a "boss monster" for a roleplaying game he was running.  He'd bought a Chaos Spawn kit from Games Workshop and stuck it together but didn't want to try painting it himself, so he handed it off to me. 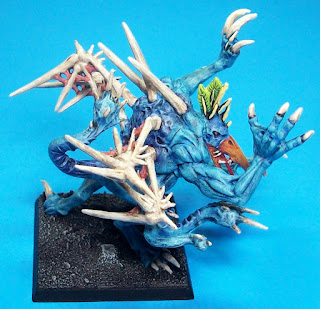 I took one look at it and asked him what the critter was supposed to be in his game.  Turns out he'd wanted a basically humanoid, winged demon lord with a vulture-like head, which would be the Big Bad at the end of an evil cult adventure arc he was doing.  I asked him why all the extra limbs and tentacles and whatnot on the model and it turned out he'd thought you needed to glue something in every possible socket or gap on the kit or it wasn't finished.  The GW Chaos Spawn kit is very modular and has a LOT of sockets and gaps. 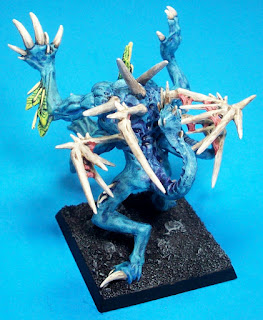 He actually didn't like the, ah, thing he'd produced very much, so I did a quick dig in the bits box and turned up an old metal GW Greater Demon of Tzeentch from the 1980s and showed it to him as an alternative.  Thankfully I had one of the vulture-headed variants rather than the parrot or double-header, and it apparently fit his mental image of the demon lord much better than his own build. 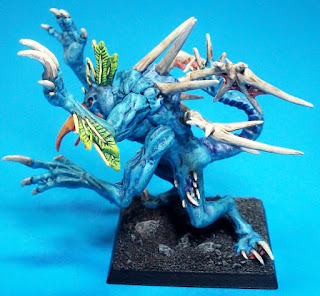 So, I finally (almost twenty years late) painted up the Tzeentch fig, and he used it to beat the tar out of his roleplaying group shortly thereafter.  I hear it reduced the wizard to a puddle of goo.  The unpainted Chaos Spawn floated around our living room for a while, and one day he asked me if I wanted it since he wasn't going to use it and it was just collecting dust.  The implication was it was headed for the garbage if I didn't take it off his hands.  I took pity on the poor thing, accepted responsibility for it, and even got as far as basing and priming it before sticking it in a box for a decade or so. 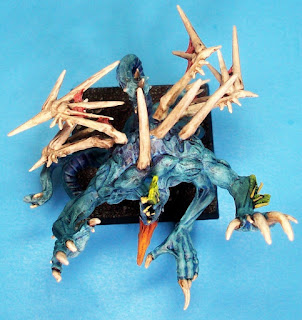 I stumbled over the figure the other day while looking for something else, which is how that usually happens.  The model was still...let's be generous and call it a little busy, but I had some time between commission jobs and needed a light project to work on.  Also, I suspect I'm going to need a chunky demon-thing to loan to another friend later this month, and he seemed like a good fit. 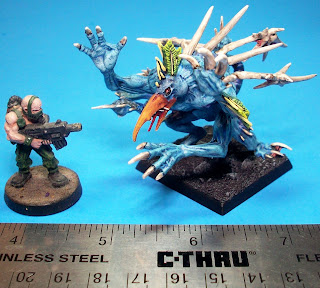 So, Yattaraxaxax the Implausible (the original Big Bad's name) finally gets some paint, over ten years after he was...born?  Assembled?  Whatever.  Think he came out okay, although GW's plastics have gotten better since this kit came out and I might not have added quite so many bits myself if I'd built him from scratch.  Which I'll probably be doing in a bit, since one of the other things I stumbled across was an unbuilt Spawn kit and a few leftover parts from earlier ones.  We'll see how that works out a future installment of Dreadful Things.