An old deleted post from 2013 rescued from the Wayback Machine archives and updated for 2019. A few of my "lemonade" projects, produced when I had a some defective castings from Ground Zero Games' ESU starship range. I got replacements from GZG promptly, but there was no reason to let some perfectly good potential spacewrecks go to waste.  I applied a little clipper surgery and some paint and presto!  Instant battlefield debris. VKK Yen Wo Long
Built from the aft hull of an ESU battleship, the prow of an escort cruiser, and
an orphaned heavy cruiser engine pod Of course there's no sense in having a collection of hulks without a way to use them as something other than simple table dressing. You can obviously make scenarios where recovery, exploration, or destruction of a wreck is a primary objective for one or both sides.  Alternately, you could also give them some simple rules to make them unpredictable "terrain" for a standard fleet battle.  My suggestion for such rules:
If all players agree, you can set up 1d3 space wrecks per player (or whatever number best fits your collections) before the game begins.  Their starting positions are determined by holding a d6 about a foot over the center of the table and dropping it, with the wreck being placed where the die lands.  If the die falls off the table completely, re-drop until it doesn't.
Space wrecks can be either stationary or drifting.  Either choose (drifting's more fun but more complex) or roll 1d6 for each wreck with evens being stationary, odds being drifting.  Stationary wrecks stay where they're set up all scenario.  Drifting wrecks start the game with a speed of 1d6+2 MU and move directly toward the most distant table edge from their starting point.  Mark the drift vector with an arrow counter, d10, toothpick, or similar pointy directional thing so you remember it's drifting rather than stationary.
The first time each game that one or more ships (not other drifting wrecks or terrain features) end movement within 6 MU of a given spacewreck, roll 2d6 and consult the chart below.
2-3: BOOM!  Rigged as a deathtrap by its last few doomed crewmen, the ship's power core goes critical when any ship comes into close proximity. The wreck explodes immediately with the same effect as a class 2 plasma bolt. No PDS fire can be used against the blast due to surprise.
4-5: Not Quite Dead Yet.  Although long abandoned, the ship's malfunctioning AI has managed some repairs and defends itself with mechanical fervor. The wreck has one Fire Control System, jury-rigged guns equal to three class 1 beams with 360 degree arc of fire, and takes six points of damage to destroy completely (no threshold checks taken from damage). It fires at the closest ship (but not other space wrecks) immediately, and in each later turn at the very start of the ship fire phase.
6-8: Just A Hulk.  The wreck is a wreck, and nothing more.  For scenarios where you're trying to recover loot, info, artifacts, or just explore wrecks, this is the result for you.
9-10: Thumbing Down A Ride.  A handful of engineers have survived the destruction of the ship and are desperate for a way off the wreck before their jury-rigged life support runs out. The first ship to end its move within 6 MU of this wreck with a velocity of 6 MU or less may pick up the survivors, adding a single damage control team to the last open hull box on its control sheet. If there are already DCTs in every hull box on the ship, the survivors will reluctantly wait for the next bus.
11-12: Input Last Command?  The wreck's AI accepts a last self-destruct command from a nearby ship, exploding in a storm of directed debris. The wreck makes an attack against any one target chosen by the owner of the nearest ship, with effects identical to three submunition packs.
Obviously you can alter the chart above to reflect scenario specific situations, such as the wrecks being aligned with one side or another or possibly containing some vital McGuffin that needs to be recovered. For simple free-for-all fights with a wreck or three drifting about the battlespace, they should do as written.
Wreck of the PFSS Fitzgerald Edwards 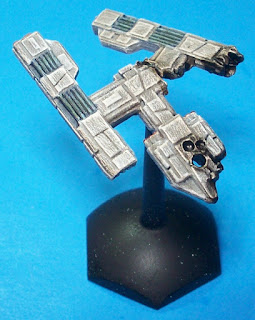 A rare miscast from Brigade Models' PacFed range, with considerable extra mangling added.  There's something oddly satisfying about drilling holes in a model.
Remains of the Arrow of Heaven 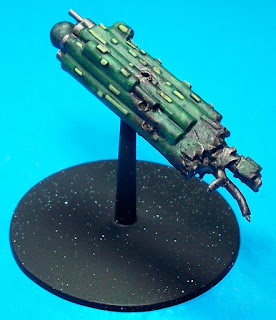 Wreck of a custom built (or maybe unbuilt) IslamaFed battleship using parts from a Ground Zero Games miniature.
Remains of the superdreadnought Valiant

Badly miscast Cold Navy ship converted to a hulk.  A resin model, metal wouldn't have been stable at that angle even with a 1.5" base.
Infested hulk of the Warder 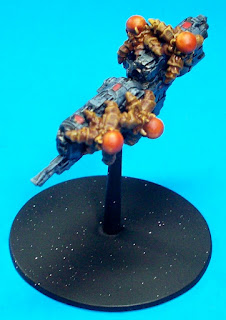 Wrecked escort cruiser being devoured by astrofauna.
Posted by Dick McGee at 7:55 AM