Continuing our series on adding more custom monsters to the "McCullough" rules family, today we have two beasties, the shambling Wormwalker and the sinister Winged Ape. 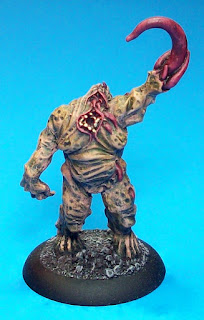 Wormwalkers are the end result of an infestation of parasitic demonic worms from the Outer Darkness.  This is most often the result of a curse or unsavory arcane experimentation, although creatures who are exposed to dimensional rifts and similar weak spots in reality may experience spontaneous infection.  The parasites swiftly multiply within the victim's body, bloating and deforming it in horrific ways.  Death swiftly ensues but is no release for the victim whose soul remains trapped within the husk, feeding the thriving demonic worm colony.  "Matured" Wormwalkers are much like zombies - mindlessly aggressive, hostile to all living things, and impossible to reason with - but are unaffected by effects that specifically target Undead creatures.    Destroying a Wormwalker's husk results in any surviving parasites within returning to their native plane, although they frequently make one last attempt to slay their attacker and procure a new host body before they do so.  Most Wormwalkers were original human, but sometimes larger creatures like ogres or troll succumb to the infestation as well, resulting in an even larger and more dangerous monstrosity. 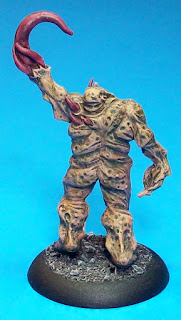 Demon:  The creature is a Demon, and is never treated as Wounded.

Dying Strike:  When this model is reduced to zero Health, if it is engaged with an enemy model then before removing it from the table it makes one last melee attack using its Fight score as though it were its activation, after which the game proceeds as normal. 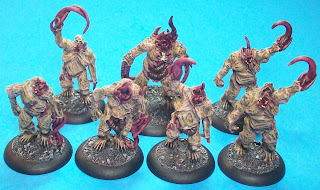 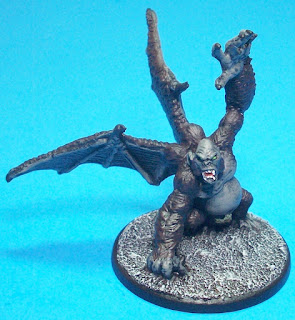 Winged Apes are unnatural chimerical creatures that combine bat-like wings with the strength of a great ape.  They are rare creatures but can be found in almost any environment from the frozen North to the jungle islands of the far South, no doubt thanks to their powerful if clumsy flying ability.  In the North they are believed to be the result of experimentation in hybridization, while the South tells ominous tales of lost prehuman civilizations whose few survivors have degenerated into bestial horrors.  Whatever the truth may be, Winged Apes possess a malign intelligence and are cunning and ruthless combatants.  While they don't use weapons themselves they do recognize them as a threat and have been known to rip swords, axes, et cetera out of a foe's hands, hurling them off to be lost in the underbrush or nearby bodies of water. 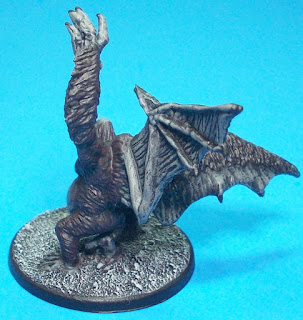 Chimera:  Chimera is a creature type, ala Animal or Saurian or Demon.  Chimerae are generally creatures that don't quite fit existing types, and often have features of several other mashed together in implausible configurations - like a bat-ape hybrid.  They do NOT belong to other creature types and so are (for example) not a valid target for spells and effects that work only on Undead, Demons or Animals.

Disarm 16+:  If a creature with Disarm 16+ is fighting in melee with an enemy carrying a weapon AND gets a natural 16 or higher for its d20 roll AND it wins the Fight comparison after any penalties and bonuses are applied, then rather than inflicting damage it will disarm the enemy.  The disarmed enemy loses the use of whatever melee weapon (if any) it was using for the remainder of the game but can recover it for free after the game.  The creature will always disarm melee weapons first starting with the one currently in use.  If the enemy has been reduced to just shooting weapons it will choose to disarm one of those at random instead.  If the enemy has no weapons, then the creature will inflict damage as normal instead of disarming. 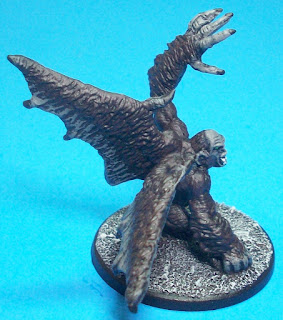 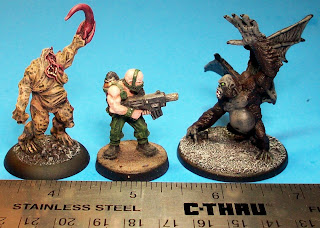