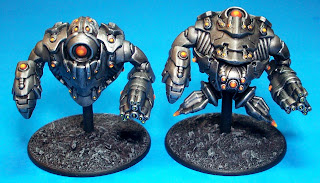 Got the itch to do some light conversion work for a scifi RPG run that needed some heavy grav droids to menace player characters with, and a dig through the "to do" box turned up some Ghar battle suits from Warlord Games' Gates of Antares range. 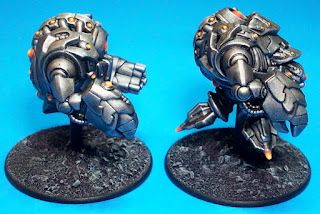 These fig are usually tripedal walker designs and have a little mutant pilot stuffed inside, but they looked like they make decent floating robot types with a little work.  Playing around with the parts a bit I quickly discovered that you could get two different good-looking builds out of the kit by repositioning the main body assembly. 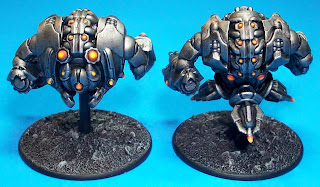 The one on the left (which we'll call Cyclops) has the main body rotated 90 degrees so what would be the front normally is facing straight down.  The head is left off entirely, and the pelvis and leg assemblies are left off and replaced with a bit from the Mantic Games Asterian Marionette kit.  Requires clipping a couple of pegs and drilling a hole for the flight post, which is pretty trivial. 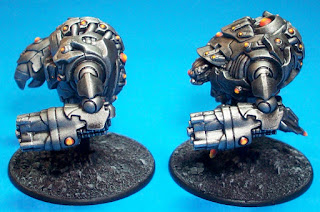 The one on the right (let's call him Norm) is oriented at the normal angle, and has the pelvis attached but not the legs.  The pelvis sockets then get three "grav vane" bits from the aforementioned Marionette kit, which is a box and a half worth of them.  I've done a LOT of Marionettes over the last few years, and been meticulous about saving spare parts. 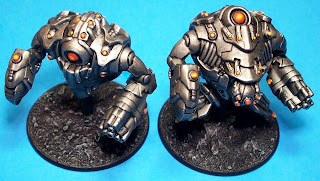 I'm still undecided on which I like better, but with some paint on them I think they both wound up coming out nicely. 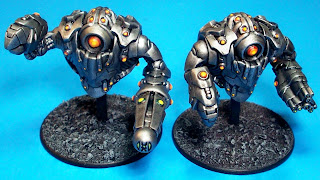 After a general call for opinions on the two builds over on Facebook I wound up doing with third suit as a second Cyclops, this time armed with a "bomber" gun, which was again modified with a bit from a boardgame. 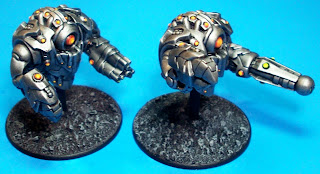 The big gun's a little bulky, but they are giant robots. 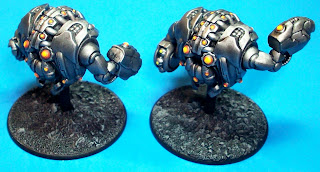 Figure they can handle heavy weapons a human couldn't. 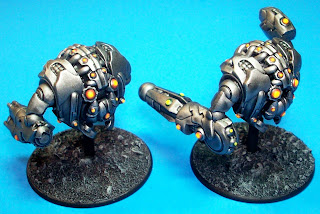 The bases are all 40mm ones that come on the battle suit sprues.  Flight posts are from Warlord Games basing range. 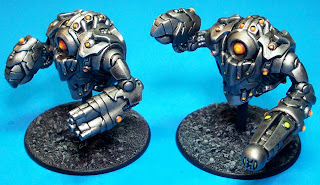 Feels like a bit of a waste of space to have the bases on the sprues instead of more alternate parts to personalize the suits more.  For example, it would be really nice if there was a left-hand claw arm option.  The guns can be swapped from one side to the other easily, but the claw arm is constructed so that it only fits on the right. 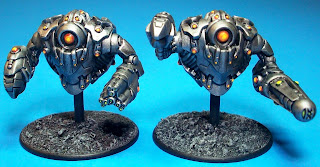 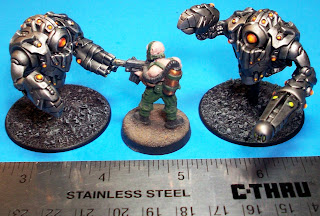