Continuing our series of additional monster ideas for the Frostgrave games family, today we've got some spooky undead. 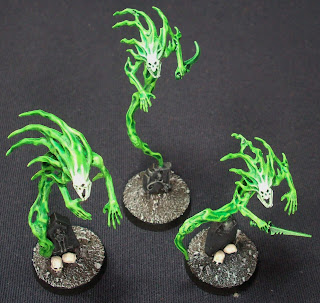 Vengeful spirits are the lingering remains of the dead, raised either by deliberate acts of necromancy, or by fell curses from dark gods, or by the sheer willpower and raw emotion of the deceased.  They are generally quite mad and filled with malice, bent on stealing the life force of any creature unfortunate enough to cross their path.  Sometimes they retain a few shattered memories of their former lives, which may include long-lost secrets sought by scholars, explorers, and tomb robbers alike.  Extracting useful information from them is unfortunately nigh-impossible. 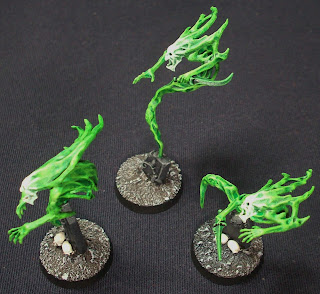 Undead:  The creature is Undead, and is never treated as Wounded.

Ethereal Flyer:  The creature can move through terrain without penalties including solid walls, but cannot end its move inside a piece of terrain.  It can also fly and never needs to make climb checks, but still won't enter Deep Water.

Immune to Non-Magic Weapons:  The creature can only be harmed by magic and magical weapons.

Life-Eater:  Whenever this creature fights in hand-to-hand combat, it and its opponent use their Will scores instead of their Fight scores to determine results.  The creature ignores non-magical armor, shields, and staves (but not magic, herbs or potions that provide Armor bonuses) when determining damage.

Soulsight:  This creature ignores terrain when determining line of sight. 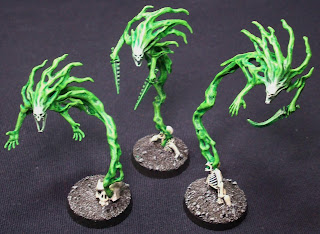 Vengeful spirits have quite a few special traits, the gist of which is that they can always detect enemies within 10" of them and will move directly toward them through even the most solid of terrain, although they still can't end their activation within something like a statue or wall.  They are unaffected by non-magical effects, and when fighting they compare Will scores with their foe rather than Fight, as well as bypassing physical armor. 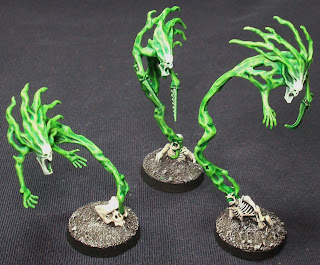 Thankfully, with only Will +2 and Health of 1 they're fairly easy to disperse when they attack, but low-Will targets like warhounds and basic crewmen are at significant risk.  Magic also works well against them, what with Fight +0 and Armor 10. 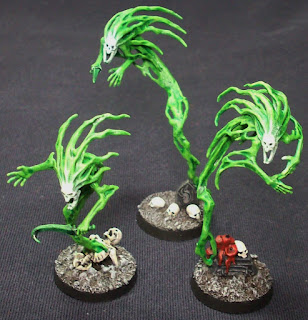 I'd rate them as a low-tier encounter, showing up in groups of 2-3 at higher tiers. 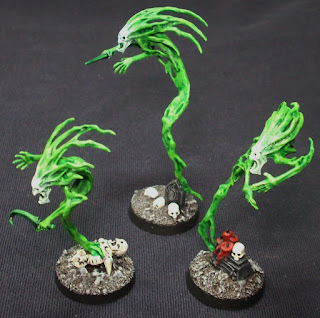 You could also build a scenario around the idea that one or more of them holds some secret that the players are seeking.  Have a steady stream of them arriving as you explore a haunted ruin or tomb (maybe one or two per player per turn).  Beating one in melee combat is a test of wills, and winning by a large margin (five points or so) would get you a roll to determine if you've found the right one.  Something like this should work (d20 roll):
1-12: Useless personal memories warped by madness
13-17:  Not what you were after, but still a useful memory.  The crew's leader gains 5 XP.
18-20:  The secret you were looking for at last!  10 XP above and an immediate scenario win.