Today's post showcases the United Nations Space Command's 361st Anti-Piracy Patrol, a small formation that operated in sections of the Outer Rim during the Third Solar War and the early months of the Xeno War.  One of the UNSC's principle duties is ensuring the safety of merchant shipping both during peace and (within some limits) war.  APP groups are therefore commonplace, especially outside the heavily-policed Inner Colonies. 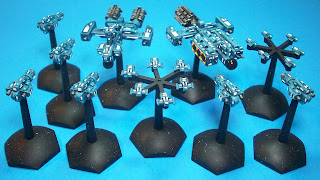 The 361st APP shown here was formed out of components of the larger 359th APP, which was broken up as part of a fleet reorganization during a lull in the Third Solar War.  While somewhat understrength, the group was scheduled to receive reinforcements in the form of several patrol frigates, destroyers and a light cruiser.  These did eventually arrive, but only after the loss of most of the Warrior-class gunships and the crippling of the escort cruiser Topeka Bay during a clash with the Two Queens pirate organization. 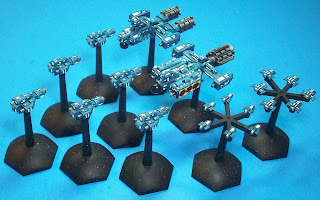 While there are playtest stats for these minis over on Dean's Full Thrust Resource Page I prefer to make my own, as usual.  The 361st APP originally consisted of the Comet-class escort carrier Francesco de Vico, the Bay-class escort cruiser Topeka Bay, and a squadron of Warrior-class gunships.  The inclusion of a Warrior squadron in a patrol formation rather than in a garrison post or assault fleet was unusual, but they'd been assigned to the older 359th APP when she was broken up and ship shortages led to the 361st inheriting them to make up numbers.  Despite having been modified for patrol work (mostly by adding high-compression fuel and consumables tanks) they were notoriously uncomfortable posts.  Their small crews tended to rotate through "stretch time" leaves on the much larger de Vico and Topeka during slow stretches. 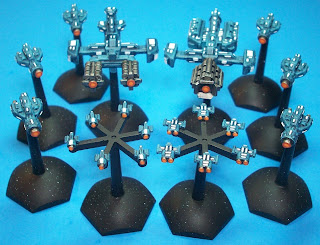 m
qqqqpqqq
qpqqqqpq
qqqpqqp
A small, inexpensive "combat carrier" design intended to allow flexible deployment of small fighter complements to patrol and recon detachments.  The Comet-II class has roughly the defenses of a heavy cruiser, the guns of a light cruiser, and a modest flight group - in this case, a multirole and a heavy fighter squadron. 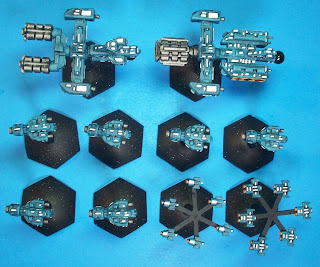 m
qqqqqpqq
qqqpqqq
qqpqqqp
UNSC technology makes the Bay-III class a more effective escort cruiser than most, as they are much more likely to retain their area defense fire control and most of the PDS array even after taking significant internal damage.  The individual ships are (like most UNSC ships) named after geographical features, Topeka Bay being found on the Inner Colony of New Kansas. 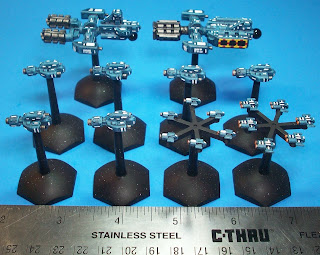 mm
p
Warriors are officially given hull numbers rather than names, but within the 361st APP these six are known by Susan, Kate, Amy, Roger-Roger, Thomas, and Mike.  Yes, they're all named for exes.  Bad exes.  It makes things easier on any surviving crew members when they're inevitably blown out of space.  And there are a surprising number of survivors, as the crew's combat control compartment is by far the best protected part of the ship and doubles as an escape pod.  Cramped, often smelly, and the heating systems leave you either freezing or boiling depending on how much the grasers have been firing, but it's as safe as you'll get on a ship this size.