"What's that cab doing parked in the shuttle landing zone?"
"UNKNOWN.  ADVISE INVESTIGATION AND INTERROGATION OF OPERATOR."
"All right Seven-Seven, I'll set down and we'll take a look-see." 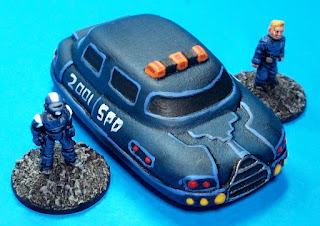 "All right, what's going on here?  You know you can't land in the landing zone.:
"Not my choice, officer.  Had a breakdown.  Both front impellers overheated sixty floors up, she was smoking but good by the time I limped over here and set down.  Had to hose her down with the extinguisher just to be safe, see?"
"I see.  You called for a pickup yet?  What service are you with?" 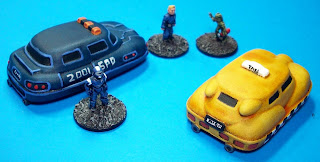 "Crusty Cab.  We're a new shop, only been running a couple of weeks.  Dispatch is sending over a couple of the mechanics with spares and a hauler if they can't get her fixed quick."
"How long are they going to be?  Can't have this clunker here when the next orbital tries to set down."
"YOUR VEHICLE IS ILLEGALLY PARKED.  IT MUST BE REMOVED WITHIN 13.5 MINUTES STANDARD." 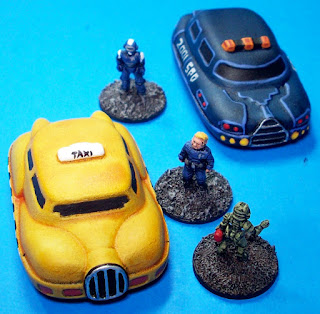 "Look, the hauler's just setting down.  Let 'em take a look at her, maybe we can just swap in a new regulator and I can get back to work, see?"
"Aw, jeez, you didn't tell dispatch the boys in blue were here.  What's the problem, Shrimp?"
"How would I know?  You're the mechanics.  The impellers were overheating and the cab was filling up with smoke, that's all I know."
"Well, we'll take a look.  Bring the tool kit over, Stretch."
"YOUR VEHICLE IS ILLEGALLY PARKED.  IT MUST BE REMOVED WITHIN 11.5 MINUTES STANDARD." 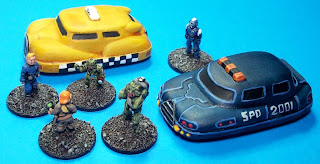 "You heard bot, lady.  If you can't get that thing airborne in five you're going to have to lift her out with your hauler.  Can't take chances with an orbital, you know."
"We'll be quick.  Probably just the regulator, or maybe the beta feeds.  Stretch!  Check the regulator!"
"Not regulator.  Smells wrong."

"Okay, check the beta feeds then.  Shrimp, what's it smell like to you?"
"I'm not a mechanic, lady.  Can't fix a cab with my scent-organs, either.  Don't be racist."
"YOUR VEHICLE IS ILLEGALLY PARKED.  IT MUST BE REMOVED WITHIN 9 MINUTES STANDARD." 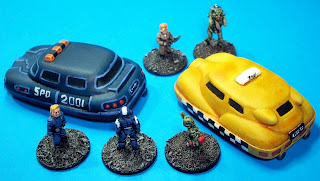 "They're working on it, uh, officer."
"His designation's Seven-Seven.  You really named Shrimp?"
"Nah, it's Eustace on my passport.  I go by Shrimp."
"THAT IS UNDERSTANDABLE."
"Seven-Seven's got that humor chip upgrade."
"Doesn't work real well, does it?"
"YOUR VEHICLE IS ILLEGALLY PARKED.  IT MUST BE REMOVED WITHIN 7 MINUTES STANDARD." 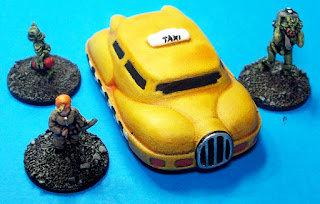 "Was insulators on beta feeds.  Swapped.  Fixed.  Good to go."
"Okay Stretch.  We good here, officers?"
"Yeah, we'll let it go this time.  Happens again we'll be looking at your shop for inspection violations, understand?"
"We got it.  See you back at the shop, Blondie.  Thanks for the quick work, Stretch."
"No big.  Part of job."
"DISPATCH, THIS IS SEVEN-SEVEN IN PATROL 2001.  BACK IN THE AIR AFTER TRAFFIC STOP.  NO CITATION ISSUED."

Vehicles are from Alternative Armies, other figures are a mix of Ground Zero Games models.