These are the newly resculpted figures, and I'm using them to represent members of the mysterious unit known only as the 300th, the "best of the best" in the NI army, elite troops issued with what amounts to light power armor and the best personal arms in human space. 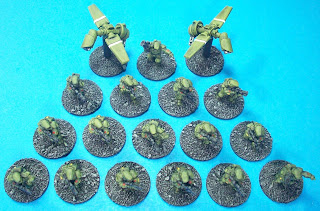 There are rumors that these troops are the product of genetic engineering to produce supesoldiers, something officially denied by the New Israeli government.  Still, their physical and mental performance seem to exceed human norms, no matter how well-trained, and similar programs have been acknowledged by some other states, most notably the Romanov Hegemony. 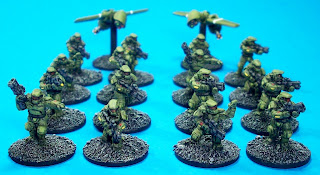 Rumors or no, these soldiers do earn their place in the military rather than being born to it.  All were combat veterans in the regular army long before promotion to the ranks of the elites, and most have participated in gray or black ops missions many times.  They may be heroes, but they're not angels.  No halos to be found in this unit. 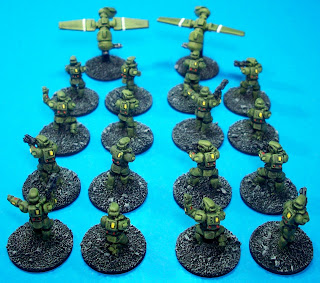 The 300th are inevitably accompanied by at least a few advanced grav-mobile drones, usually used as shells for networked strategic AIs linking them to High Command. 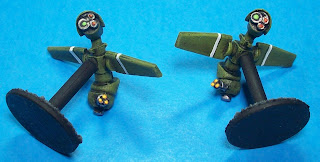 There are eight different rifleman sculpts at the moment, including two that make nice fireteam leaders.