Here's something you don't see every day:  Three Wraith-class Al-Malik stealth destroyers from the OOP A Call To Arms Noble Armada game. 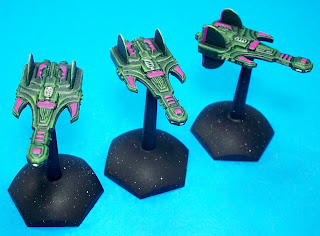 These minis came out late in the life of the game, along with many ships that were added in the Fleets of the Fading Suns supplement.  They were produced in fairly small numbers as Mongoose was already getting set to abandon the game even as the book came out.  Our local store was lucky enough to get a few packs from this late wave of product. 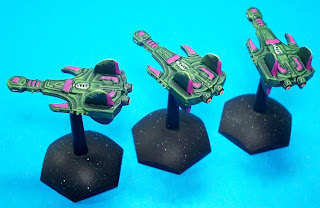 The Wraith class was marketed as a "stealth destroyer" but acts much more like a submarine than a destroyer on the tabletop.  Compared to the Efreet-class standard destroyers, she is slightly faster but much clumsier.  She relies more on stealth systems than armor to survive although her greater bulk makes her a bit more durable than the smaller Matachin class.  The Wraith lacks any turret armament at all, but mounts moderate 10 die rocket batteries on each broadside and carries the same large troop complement as a Matachin. 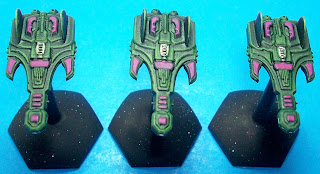 Those broadsides and troops are really not going to get used all that often, except perhaps defensively.  The outstanding feature of the Wraith is her prow weapon system, a massive 3 die torpedo launcher array.  This is a weapon normally found only on ships of cruiser grade or larger, and the Wraith is the only destroyer-grade hull to carry them.  That's three shots a turn of guided, shield-ignoring, double damage warheads that are highly resistant to gatling laser point defenses, and all that at 32" range from a ship that costs only 220 points (the standard Efreet was raised to 200 points in Fleets).  You can reliably score 4-6 damage per turn ignoring shields, and from ranges that make your stealth 4+ a meaningful defense - and you don't need (or benefit from) scout support to do it. 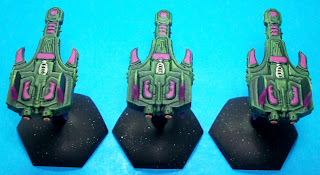 The main drawback to the torpedoes is their front 90 degree firing arc, which means these ships want to get in to a good firing position then stay on All Stop orders and keep the range open for as long as possible, while whittling down priority targets.  If the enemy rushes you, they'll be open to massed rocket fire from the rest of your fleet - and the Fleets book gave everyone the option to load 10" range double damage rockets instead of the normal version, so sprinting face first into an Al-Malik fleet borders on suicide.  And if your attackers do manage to get past your battleline your own rocket broadsides are a bit stronger than a frigate's and you've got a dozen troops on board, enough to manage a capture themselves against many ships.

I wouldn't want to field more than one or two of these in most games due to their specialized nature, but with proper support they're well worth the 220 points.  They don't like facing a lot of enemy scouts (who break their stealth down and leave that weak 3+ hull open to fire) or other really long range weapons (which only appear on cruisers and heavier ships, and not even all of those), and they can have trouble dealing with a lot of smaller ships at once, but used carefully, they're a unique and interesting addition to the Al-Malik fleet roster.

Email ThisBlogThis!Share to TwitterShare to FacebookShare to Pinterest
Labels: A Call To Arms Noble Armada, Starships