There are a lot of scifi ground combat games out there, ranging from small scale skirmish rules to mass combats between whole armies.  All of them feature some kind of rules for terrain, but very few seem to do much beyond the usual sort of hills, woods, rivers, etc. that you see in realistic historical games.  Sometimes we get a bit of a scifi touch with rules for varying gravity or alien wildlife or toxic atmospheres, but you don't see a lot of more "out there" stuff, particularly for fights taking place "indoors" in huge future arcologies, the decks of a gigantic starship, or mysterious alien ruins.
So, here's some suggestions for a few house rules to add a bit of that to whatever game and whatever scale you prefer.   They are not intended for cutthroat competitive play so don't pester your local tournament organizer about using them.  I'll write this as scale and system neutral, with a few suggestions on how to implement them in specific rule sets as examples.  None require anything elaborate as a model to put on the table, although if you just use counters as markers you might want to up your terrain game a bit.
First up, there's that old classic, the teleport portal.  Or transporter.  Or stargate.  Or Q-99 Rapid Transit Personnel Evaporator/Revaporator.  Whatever.  It's a doohickey that lets your models move across the table without following the usual rules.  The rules below assume they're either poorly understood, badly maintained, highly experimental, or all of the above, so not entirely safe to use. 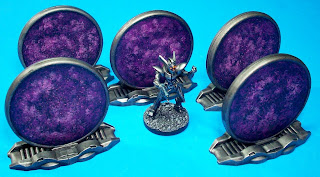 To use these, set up five gates scattered over the table before setting up your troops, numbering them from 1 through 5.  To be most interesting, they should be pretty far apart from one another, not too close to table edges and corners, and in spots where there's some other cover nearby and/or line of sight blockers.  A model can move into base contact with a teleporter and use it to attempt to jump to another gate.
Roll 1d6 for the model (or unit, if your rules don't have individual models moving on their own).  If the result is the same number as the gate you're using, the teleport fails and you end your movement for that turn, although you can still shoot or perform other actions.  If the result corresponds to another gate's number, set the model(s) that were jumping through the gate up in contact with that gate, or in unit cohesion with it if multiple models were teleporting.
If you roll a six, or a number that doesn't match a functioning gate, remove the model(s) from the table.  At the end of your next turn, roll again.  If you get a result matching up to a functioning gate you appear there.  If you don't, the model(s) are lost in time and space or routed to a holding cell or vented into space or something similar, and count as casualties.

Gates should be tough but breakable.  In Stargrunt I'd treat them as a 2d12 armor vehicle that's wrecked by any penetration, in Rogue Stars I'd give them 5 points of armor and have them break when they take Critical Damage or worse.  A broken gate is no longer a valid destination for the 1d6 roll and therefore makes using the gate network more risky.
You could also experiment with using more or fewer gates, but I'd pick a number that's one less than a die type (so 3, 5, 7, etc.) just for convenience.  The more gates you have the safer they are to use (although that can change as people break them and produce more "missing" results) but the less likely you are to go just where you want.  You could also allow appropriately skilled characters (eg Johnny Techmarine in 40K or a character with a level of Tech in Rogue Stars) try to control a gate by rolling an extra die and choosing which result you prefer.
Secondly, there's the ever-popular mysterious field generator.  These are big humming machines that crackle now and then, and project a field of esoteric energy that interfere with fire directed at nearby models.  To use these, set up four generators scattered around the table, numbered from 1 to 4.  I'd avoid putting them inside setup zones or within a single move of a table edge, and they should have line of sight to all the other generators.  Any shooting directed against a model/unit within 3" of a generator (maybe going up to 6" if you're playing on a 4'x6' table or larger) is deflected or absorbed on a d6 roll of 4+, rolling once for each shot actually taken.  Fire from models within the field is unaffected, so you can shoot out just fine. 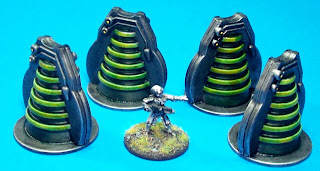 However, at the end of any turn where one or more shots were stopped by a generator in this way, roll a d6.  On a 5 or 6, there's an alarming whining noise but nothing else happens.  On a die result corresponding to one of the other generators, draw a straight line between it and the generator you're testing for as an arc of raw energy leaps between them.  Every model within 1" of that line takes an automatic hit for fairly serious damage.  In Stargrunt a d8 impact hit seems about right, for Rogue Stars a torso hit from a Zap Rifle should do.  If you roll the result that corresponds to the testing generator, then every model within its defensive aura range takes the same hit as bolts of power arc wildly around it.
The generator(s) involved are unharmed by any of this, and are generally invulnerable to damage of any kind.  You could allow "techie" types as above to shut down a generator in contact with a die roll, with a deactivated generator no longer providing saves and counting as a "safe" 5-6 result from then on.  Experimenting with using more or fewer generators is fine, but mostly I'd just increase or decrease their radius of effect based on your table size and how much impact on play you want them to have. 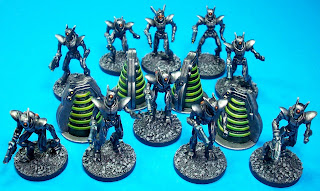 Control panels are also a neat piece of scenery, albeit with less firm rules.  If your scenario calls for doing something like "deactivating the tractor beam" or "starting/stopping the self destruct countdown" then a control panel planted someplace tricky for both/all sides to get to is ideal.  If you're using the teleporters of generators above, techs could fiddle with them from a control panel rather than needing to be in contact with them.  Or you could allow bulkheads or doors to be opened/closed/locked/unlocked form the controls.  In all cases they should about equally accessible by all players.  They're pretty breakable (about as tough as an unarmored human) and what happens when they break should be spelled out beforehand.  It's possible that only one side is allowed to attack control panels in a scenario.  Enemy boarding parties breaking the Big Red Button that fires the Doomsday Weapon might be fine, or maybe it's too risky to tamper with and needs to be protected. 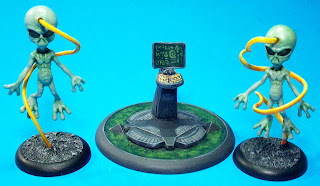