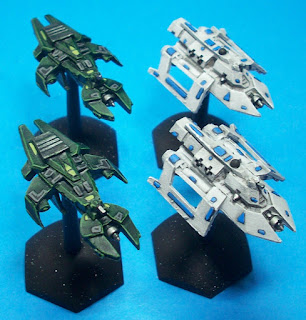 These are the Decados (left) and Hawkwood (right) troop landing ships.  They have a rather strange history even by Noble Armada standards.  They were only sold by Holistic Games (the original publishers of all things Fading Suns) as part of the boxed sets that came with the factions' dreadnoughts, and are currently OOP.  The Holistic edition of Noble Armada had stats for them IIRC, with them being largish but lightly armed ships designed mostly for landing troops planetside, although they could also board fairly well if they could catch a target ship. 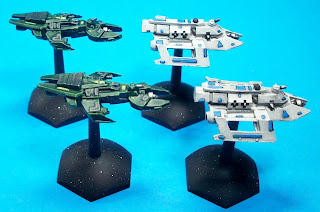 The Mongoose version of Noble Armada never did stats for them and the minis went unreleased even as the rest of the line grew and grew.  It's possible they simply didn't have the masters or molds for them, but they did tell players that had them from the Holistic days to proxy them as galliots.  This is pretty funny since both ships were featured in the art of the ACTA NA rulebook, with the Hawkwood ship appearing right on the front cover and the Decados ship getting a half-page art piece all to itself, as well as painted minis appearing in fleet shots. 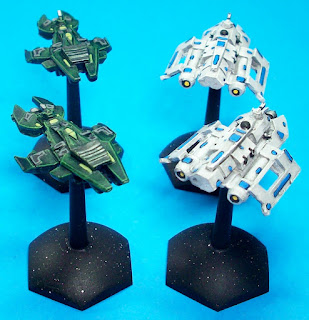 Not sure if they've been included in the FASA edition of the rules, although I wouldn't be surprised if they were.  They seem to be staying a little closer to Holistic's version of the game than Mongoose did.  If so we'll hopefully see them released by Ral Partha Europe at some point, which will mark the first time they've been available outside of an expensive combo box. 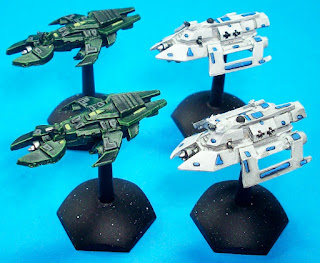 Email ThisBlogThis!Share to TwitterShare to FacebookShare to Pinterest
Labels: A Call To Arms Noble Armada, Starships