Brigade Models' EuroFed minis range is pretty comprehensive, but they do lack a troopship mini, so here's another use for their Revanche strike carrier mini intended to fill that role.  The Revanche has an array of six exterior docking cradles on her belly that are probably intended to carry gunboats or some kind of heavy fighter, but they also fit the Cormoran utility shuttle just fine. 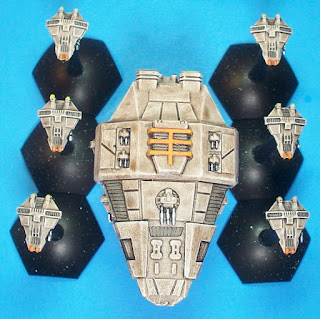 Vendetta Armed Troopship
Depending on who you ask, the Vendetta-class armed troopship is either an innovative approach to the problems of landing troops on a hostile world or a government boondoggle of the worst kind.  The vessels use the same basic spaceframe as the Revanche strike carrier, but instead of a brood of gunboats her ventral carrier racks are modified to haul Cormoran utility shuttles configured as drop shuttles.  Her drives, gravitic compensators, and reactor array are all significantly down-rated and the resulting space used for troop capacity, loadouts being primarily power armored infantry units, light mecha suits, and small attack vehicles.  She does retain most of the main armament of the Revanche though, including a capital ship grade primary beam turret, a large secondary battery, and a hefty point defense fit.  While the Vendetta is far too slow to serve as a warship, she does effectively provide her own escort and can help defend other equally sluggish troop carriers and fleet support ships if need be.  Her use of external racks and airlock links for the Cormorans complicates troop loading somewhat compared to the traditional internal hangers, but it also saves a great amount of mass and cost.  Her actual troop load is larger than most comparably sized assault transports and her drop capacity is only slightly lower, but many critics of the design raise the question of whether such heavy offensive armament has any real use on a support craft.  After all, leaving off all those guns would allow for even larger troop bays and greater drop capacity.
﻿
TMF 124
NPV 320 / CPV 277
Thrust 2 q 1 q
FTL (includes 78 Mass of Tug capacity) q
2 Fire Controls qq
4 PDS qqqq
1 Class 3 Beam Battery (F/FS/FP/AS/AP) q
4 Class 2 Beam Batteries (F/FP/AP) qq (F/FS/AS) qq 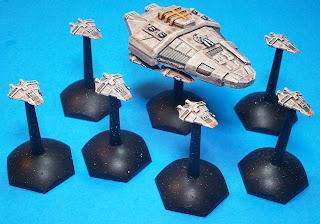 Cormoran Utility Shuttle
The Cormoran shuttle has many potential configurations, but here we have an STL drop shuttle version.
Assault Shuttle
TMF 13 (Partial Aerodynamic Streamlining)
NPV 37 / CPV 26
Thrust 8 q 4 q
1 PDS q
Cargo/Troop Bay (3 Mass) qqq
Hull 3 (1/1/1) - 1 crew unit, 3rd box
q
q
p
With six of these shuttles attached to a Vendetta, the whole force can load 54 Mass worth of troops and vehicles, 18 on the Cormorans themselves and 36 on the transport.  Getting everything on the ground would take three full waves of landings assuming no shuttles lost in the process.  The use of many small dropships lets a Vendetta task group hit many landing sites at once, but the small capacity of each shuttle does restrict troop selection to low-mass vehicles, small mech suits, and (most popularly) power armored infantry units. 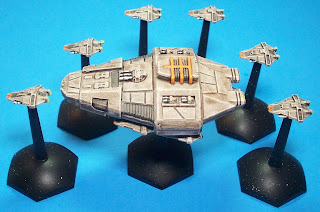 The minis are available (unpainted) from Brigade Models here:
http://www.brigademodels.co.uk/Spaceships/EuroFed.html 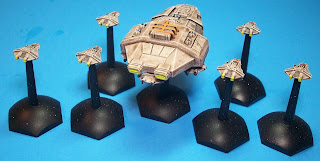 Primary EuroFed fleet article on our blog can be found here:
http://brokenstarsburningships.blogspot.com/2018/10/european-federation-fleet-statistics.html 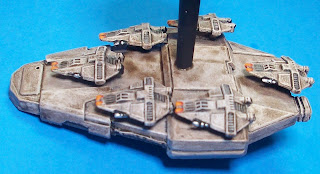