Following up on yesterday's post, this is the rest of my current crop of IJN starships painted up.  About the right size to act as an escort formation for, say, an experimental superdreadnought you want to keep safe: 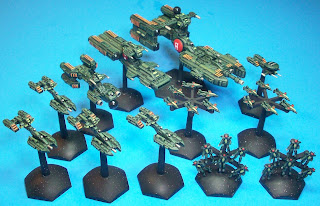 Or they make a nice independent light carrier task force instead: 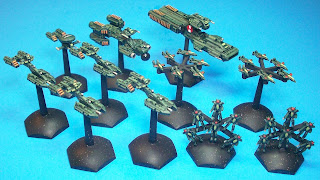 Basically a Hiryu-class light carrier with its brood of mechafighters and some supporting warships.

This is the first time I've tackled painting the Katana Multi-Mode Configurable Fighter minis, which come as both fighter and mecha mode minis and can shift between the two during play for best effect.  Won't call them Veritechs, but they sure seem familiar, don't they? 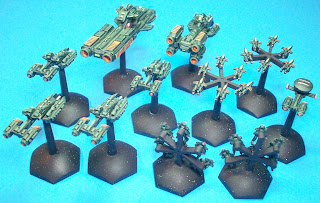 They're not especially hard to paint (no worse than any of the tiny fighter figs are, anyway) but the mecha mode figs did present an interesting problem for me. 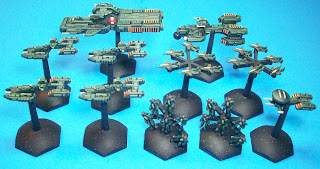 The models have insanely small contact points if you're going to try to glue them to the fighter "spider" bases standing up, and that worried me since it would leave them really fragile.  If they were for me that might have been acceptable, but since they were headed for ebay I wanted something sturdier. 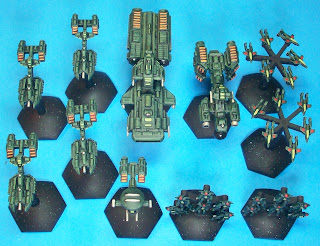 Fortunately the new metal spider stands (the old ones were metal) offered an alternative.  I took the mechs, glued them to five of the base pads and the center point back first, then used the remaining pad on the end of the arm as the "flight post" to attach to the hex base itself.  The result is all six mechs in a "floating in space" pose that I think looks pretty good. 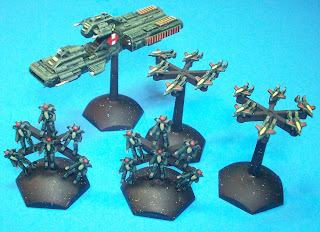 Not the easiest job ever and the set up does block a lot of the rear detail, but they're much sturdier than a standing on the pads & arms position would have been. 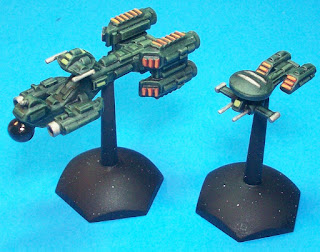 The formation also includes a Samurai-class heavy cruiser for discouraging direct attacks on the carrier and a Shoya-class sensor picket for helping detect enemies and direct fighter strikes. 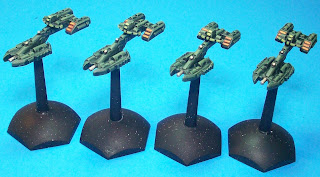 There's also a small squadron of the ubiquitous Soyokaze-class destroyers for added firepower and numbers.