The Out Rim Coalition is one of the minor powers in the Stargrunt setting and hasn't had much in the way of official development.  We know they're fairly high-tech (hence the fancy sealed carapace armor on their infantry and having their own range of Full Thrust starships) and operate on the frontiers of human space but not much beyond that.

In my head canon the Coalition is a formal defensive alliance of a number of the larger outer colonies that formed with significant aid and support from the UNSC.  Their primary purpose is to ensure the safety of member worlds and the shipping routes connecting them.  This puts them at odds with the many renegades and pirates who operate in the frontier zones, as well as resulting in the occasional clash with various governmental forces who attempt to extend their reach into the area.  While they lack the numbers or power to oppose the Big Four effectively, smaller powers like the Islamic Federation, the Scandinavian Federation, the New Israeli Starfleet, and the PAU have all clashed with the ORC in the past.  Corporate Japan has also fought both with and against the ORC, and many mercenary groups have also seen action on the Rim either alongside the ORC or opposing them.

The UNSC is unquestionably the ORC's closest ally, as the Coalition's mere existence frees up a large number of UNSC assets for policing the Core and for exploration missions.  There is significant sharing of technology and military intelligence between the two, and UNSC "distant exploration" bases can be found throught the Rim on ORC member worlds.

Any frontier world can theoretically apply for ORC membership through the UN, but only "emancipated" colonies that are not recognized as still being part of an existing polity can generally make such applications.  Most such colonies are either multi-cultural settlements that were founded by multiple factions or by independent "exodus" organizations bent on leaving the Core cultures behind.  Even the Big Four have sometimes lost colonies to the ORC, although in most cases these were either failing and unprofitable holdings or ones whose strategic position had become untenable following one of the Solar Wars. 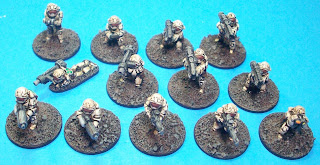 ORC first class infantry is quite well equipped, with standard-issue carapace armor that includes full life support gear and a wide variety of sophisticated personal weaponry.  These suits and the training to use them maximize the versatility of the troops, allowing them to be deployed to all manner of planetary environments as well as being useful for "space marine" and microgravity operations.  Many ORC recruits come to the military from belter and spacefaring communities and already have a great deal of experience with vacuum ops, an advantage few other factions share. 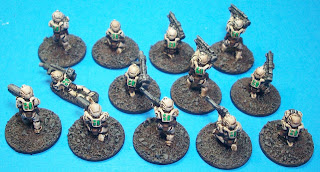 The bulk of ORC infantry is either assigned to their fleet in a marine role or on various orbital and deep space habitats.  They generally operate in squads of ten men with a mix of weaponry.  Planetary defenses on worlds with benign "shirtsleeve" environments are more often left to local Colonial Defense Force units and militia whose TOE varies wildly from place to place.

Few ORC infantry units have permanent ground transport assigned to them.  When required for groundside operations, they draw suitable vehicles (as well as their crews and techs) from local defensive forces or from central equipment reserves maintained at larger Coalition bases.  This sometimes leads to poor coordination between troops and their transports, although efforts at cross-training continue.

One of the more common of these "casual" transports is the Tassigny APC, a hover vehicle manufactured under license from the French company Sofema.  A relatively basic design that originally dates back to before the Second Solar War, the version in ORC service has been upgraded and modernized for the Xeno War era.  It remains an inexpensive and reliable vehicle with low (for a hover vehicle) maintenance requirements and good fuel efficiency.

The Tassigny is also a fairly spacious design, although still pretty cramped with a full ten-man squad loaded along with whatever specialist gear required by their mission.  Like most hover vehicles they have good ground speed and fair agility compared to wheeled or tracked platforms, and have the power-to-weight ratio to cross calm water without difficulty.  On the other hand, they lack the versatility of a true grav vehicle and are obviously utterly useless on worlds without sufficiently dense atmospheres.

They do have a very high visual profile that makes them rather obvious targets.  Hover vehicles in general tend to stand out on the battlefield due to dust plumes and acoustic signature, so their size isn't regarded as a major flaw.

More significant is their fairly light armor and lack of any anti-vehicular weaponry.  This relegates them to the traditional "battle taxi" APC role where their troops de-bus to fight independently as quickly as possible, preferably outside of combat.

Some variants of the Tassigny carry heavier weaponry and can serve as fire support vehicles or proper IFVs.  The added cost of such weapons makes them fairly uncommon and sometimes limits their troop carrying capacity. 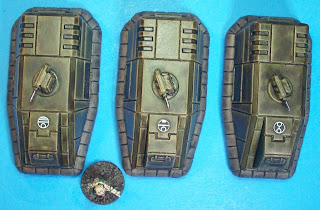