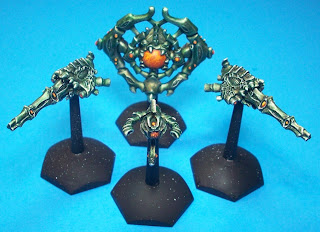 Many, many years ago, back in the days when there was only one edition of the Traveller RPG, I played in a campaign where the GM had a unique take on the setting.  During the course of the game our group of brave (or at least well paid) space explorers suffered a misjump that left us in unknown territory on the far side of K'Kree space.  We quickly got involved with a new alien civilization that called itself the Congress of Ergovores, an alliance of species who shared one unusual trait.  All of the member races were ergovores of some kind, and had no biological need to ingest material from other living creatures.  Most were photosynthetic, some fed on hard radiation, some were weirder still (and probably not at all realistic) but all of them were united in not liking species that ate other life forms, no matter what. 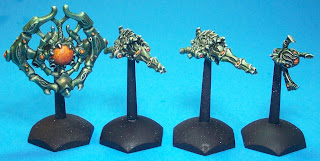 They were pretty fair about things when they ran into "eater" species, a category which includes pretty much every canon Traveller race.  The Ergovores would offer to provide a technological solution to the unfortunate need to devour life, usually some form of artificial food synthesis.  If an eater race took them up on their offer all was good, although they were still never going to be offered full membership in the Congress unless they underwent radical genetic engineering to remake future generations into true ergovores. 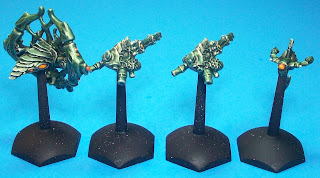 If the newfound eaters refused to change their ways though, well, that's why the Ergovore Crusade exists.  They generally wouldn't commit outright genocide in the course of chastising a recalcitrant species, doing their level best to preserve enough of a population to avoid extinction.  No eater race was going to be allowed to go their own merry way though.  And the Congress had members who were about tech 16, and territory larger than the Imperium. 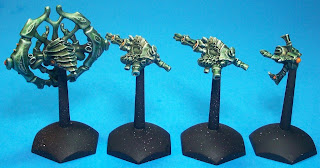 The K'Kree were the closest in-canon neighbors to the Ergovores' space, and by the time of our misjump first contact had already happened and had gone very badly indeed.  So the Crusade was coming for the Centaurs in full force, and we could all see they weren't going to stop with them when all of known space was chock full of wild eater races in need of correction.  Amusing as it was to see the K'Kree on the receiving end of dietary intolerance, the Congress was darned scary. 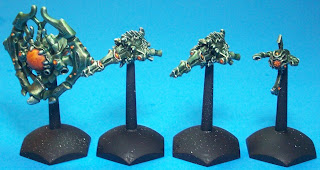 Sadly, we never resolved the storyline due to mass graduation, but the idea has stuck with me for years.  Today, I'm doing an homage to that campaign (and Traveller's fondness for the battle rider/FTL tender idea) with a small Crusader scouting squadron built out of Gates of Antares bits.  I'm statting them up for Full Thrust so their performance won't precisely mirror what they were capable of in Traveller High Guard, but the overall feel and role of the ships is close enough.
There are several house rules used here, and some of them are iffy enough that I wouldn't use these ships competitively.  Better used for "scenario" games where perfect balance is less vital and point costs are mostly irrelevant.  The group also uses some less-seen official rules, specifically the FTL tug rules from FT and the semi-official graser and variable hull row rules from the UNSC playtest article.  Some ships also use 120 degree forward firing arcs, which should pretty self-explanatory even if they aren't technically supported by the FT rules.
Ergovore ships are extremely high-tech by any standard, and use 3-row hulls, advanced drives (per FB2), and graser weaponry.  All FTL-capable Congress ships have Advanced FTL as well, although they also use a lot of FTL tugs to move non-FTL combat ships around.
Advanced FTL
A ship with Advanced FTL that leaves the table under FTL always succeeds and never takes or causes damage in the process.  When entering the table via FTL, the ship never takes damage and never inflicts damage on friendly units (nearby enemies are fair game, though).  Its maximum scatter distance for entry is 1d6 MU (ie don't use the option to reroll and multiply on 6 results) if there are any friendly units already on the table at the start of the turn arrival was plotted.
If playing a strategic game, the ref (or players) should decide on some kind of bonus for Advanced FTL beyond these rules.  Longer range, faster recharge rates, ability to move through spatial terrain (eg dense nebulae) that might otherwise bar or slow FTL, etc.
Advanced FTL systems have the same mass as standard FTL but cost Mass x3 rather than Mass x2.  FTL tugs with Advanced FTL pay the same cost for their tug drive and they and their carried ships receive the same benefit.
Cooperative Effort-class Jump Tug 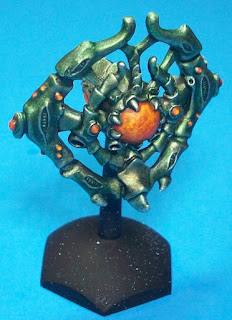 Roughly the mass of a conventional heavy cruiser, the Cooperative Effort class is one of the smaller jump tugs used by the Ergovore Crusade forces.  Slow, lightly armed and lightly defended, the ship relies on her parasite warships for protection.  Her normal combat load consists of a pair of cruiser-sized warships, although they sometimes use larger numbers of small ships or (rarely) a single capital ship with a maximum mass comparable to a human battleship. 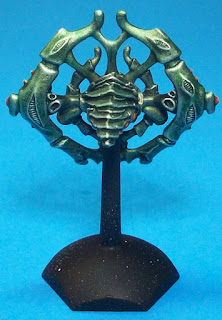 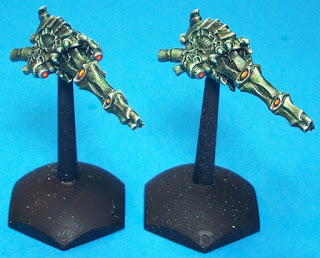 One of the more common mid-sized parasite warships used by the Crusade, the Compelling Argument is essentially a large flying canon.  The design can output staggering amounts of continuous beam fire which can be concentrated on a single target or swept across two as needed.  With no real secondary weaponry these ships prefer to stay at moderate to long ranges where keeping the enemy in their primary arc is easier, something made easier by their powerful grav drives. 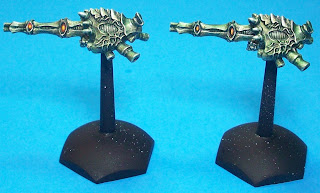 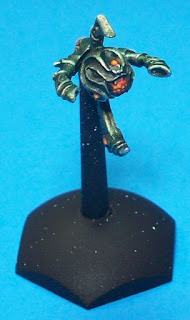 One of the smallest FTL-capable warships in the Crusade fleet, the Common Cause class appears to be a high-mobility recon craft with a secondary combat role as a fast strikeship and mobile FTL jump beacon.  They are most often the first ships to be encountered in a system, and their remarkable drives make it difficult to intercept them when scouting.  If they do permit an enemy to close to potential combat range, they will almost invariably have backup waiting to jump in from hyperspace after the engagement begins. 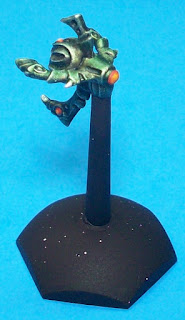