Sentrabots are one of more unusual randomly appearing NPCs with rules very much like Tamix Phage from the Dead or Alive solo rules, but greatly toned down with shorter range on the reactive snap fire trick and minimal melee capability as well as being much less durable.  Unfortunately, their mechanics don't work at all well with the standard AI chart, making them something of a joke to deal with instead of at least a mild threat. 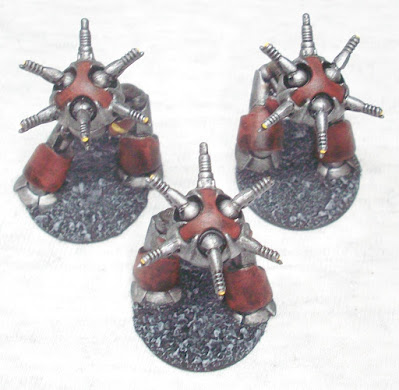 Accordingly, when using them I recommend using the following AI behavior for these things rather than the default one on pg.65 of the core book:
1.  Is the Sentrabot in combat?
Yes:  The Sentrabot uses its first action to fight, choosing the enemy with the lowest Health if facing multiple targets.  If it wins the fight it will push the enemy back.  If it is no longer in combat after this go to step 2, otherwise its activation ends.
No:  Go to Step 2.
2.  Is there a crew member in line of sight?
Yes:  The Sentrabot will use all its available actions to move either toward or away from the closest visible enemy figure until it is as close to 8" away as possible, taking the most direct path it can and climbing if necessary.
No:  Go to Step 3.
3.  Target Point or Random Movement
Follow the rules on pg.66, using the Step 2 above rather than the one in the rulebook if called for, but stopping when it reaches 8" distance from a target point. 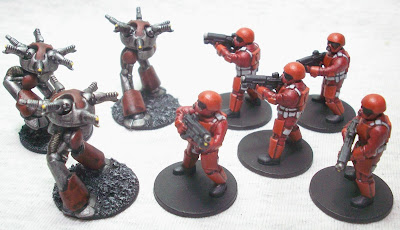 Following this AI program will lead to Sentrabots trying to stay at a "safe" 8" distance from whatever the nearest visible threat is so it can keep using Surprise Shot rule as long as possible, even backing off from melee if it's lucky enough to win a fight.  Won't happen often, but these things are quirky enough that giving them slightly different behavior will make them more memorable than most NPCs.
If you find this makes Sentrabots too impactful on the game, I'd suggest modifying them so that they treat ALL non-Sentrabot figures on the table as enemy, whether they're part of a player crew or not, and are similarly treated as crew (and therefore enemies) by other NPC figures, whether they're creatures or pirates like those poor troopers pictured above.
Could make a neat scenario (perhaps as a co-op game) out of trying to clear a bunch of Sentrabots (using their improved AI) from an area, perhaps with reinforcements coming in over time or support from a Warbot.
This trio of Sentrabots were kitbashed from bits box parts, some of them dating back over twenty years.  Knew I'd find a use for those spare legs from I-Kore eventually.