Grenades and grenade launchers seem to generate a lot of discussion (some of it pretty heated) in the Stargrave community.  Common complaints about them revolve around them being overpowered, or their rules being unrealistic, or both.  After playing a fair bit and listening to other folks' issues I'm adopting some house rules for future games to see if I can produce a more enjoyable experience. 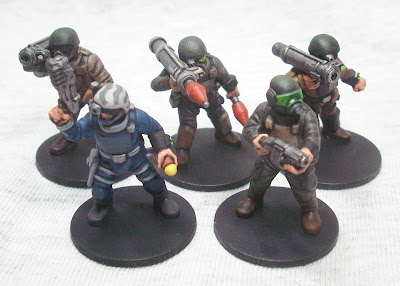 As far as power balance goes, I'm not really sold on grenades being all that over-effective compared to the other "heavy weapon" options.  Rapid fire guns hit harder, can still engage multiple targets and have excellent range.  Flamethrowers are short ranged but can easily affect many targets at once, hit hard and ignore most armor and some cover, as well as requiring fewer gear slots than the others.  Both benefit a great deal from Shoot advances when used by an officer as well.
Grenade launchers fall between the other heavy guns for range but largely ignore line of sight limitations, and while they gain no damage bonus their area of effect can be extremely punishing to crews that refuse to spread out when faced with them, especially ones that are relying on group activations.  They're also more versatile, since they have the option to drop smoke templates that can be enormously impactful to gameplay.  On the down side, they can endanger allies with scattered shots and they get no direct damage benefit from improved officer Shoot scores.
Regular hand-thrown grenades are similar but have very short range, making a bad scatter roll a real danger that launcher bombardments doesn't often suffer from.  They're also more of a secondary optional weapon on soldiers, and use only one gear slot for both types of grenades on officers.
They also get a little better every time more advanced tech version of them come out, and we've see four of those (six if you count Bug Bombs and Sparkle Dust) in just two supplements, compared to one piece of anti-grenade tech (one-use, no less) and a single power to counterbalance them.
On the whole, I do feel that grenade launchers and to a lesser degree grenades are a bit too good for their cost (be it a grenadier soldier or gear slots on an officer).  But only a bit, and mostly because they punish your opponent so harshly for staying within officer activation range and because they can use smoke at will, which is effectively a cut-rate power akin to Holographic Wall in effect. 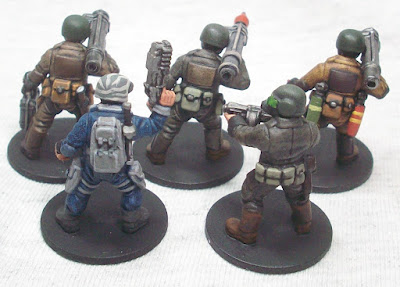 Accordingly, I'm making the following changes:
When caught in the area of effect of a frag grenade, any model that isn't already Stunned or engaged in melee combat may declare that it's "hitting the dirt" before the grenade detonates.  The model becomes Stunned per the normal rules, which will give a bonus to its Fight rolls against Shooting attacks.
In addition, increase the Fight modifier for being Stunned by an extra +1 (total +3) against frag grenade attacks (and other advanced tech grenades that act like frags, eg force grenades from Q37), regardless of how the model became Stunned in the first place.
This significantly increases the odds of surviving a grenade attack in exchange for accepting the Stunned condition, which can be removed as normal by either losing an action in your next activation or by someone applying a medic kit to the Stunned figure.  Figures that are already Stunned are also safer from grenade blasts.  Remember the absolute cap of +10 to any Fight roll, which will come up more often with combinations of the improved Stun modifier, cover and advanced officer stats. 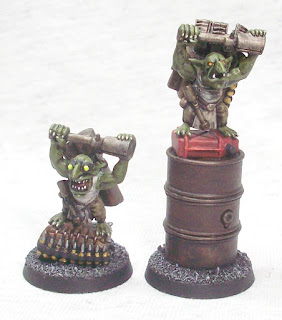 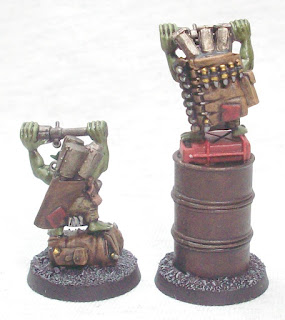 As to the realism issue, I've seen plenty of ideas for modeling arcing fire, terrain shadows, forward observer requirements and similar mechanical crunch, absolutely none of which strikes me as being worth the effort of using.  Stargrave is a rules-light, fast-playing system, not a serious military simulation in the vein of Advanced Squad Leader.  I'd prefer to keep it that way.
That said, you do see some pretty silly game situations now and then, especially with very tall terrain pieces.  My answer to that's pretty rudimentary, and is more a "quality of life" hack than a house rule:
When measuring range for an indirect grenade attack, take a piece of string of the appropriate length (6" or 16") and lay it out over the line of fire from the attacker to the target point, letting it drape over terrain in the way.  This will naturally reduce the total distance you can shoot when lobbing a round over elevated terrain, sometimes pretty dramatically.  String works better than most tape measures or other rigid measuring tools since it's more flexible, and being cut to length means you don't have to try to read the correct range when it's in position.
Easy to do, materials cost virtually nothing, and it works in other rule systems.  Sometimes the simple approach is best.
__________________________________________________________________

On the opposite end of the power scale is the gunfighter from Q37, a specialist shooter who wields two pistols at once.  Unfortunately, they're not very good as written.  Essentially they're snipers (same raw stats and hiring cost) that trade out their carbine and hand weapon for two pistols and a knife and special rule that gives them a +1 Damage bonus to Shooting as long as they have two or more pistols that aren't jammed.  So essentially a very accurate shooter with a 10" range and a +1 Dam that might go away temporarily if they jam.

The problem being that the aforementioned sniper can (like any model with a carbine) swap it out for a shotgun.  Which makes them a very accurate shooter with a 12" range and a +1 Dam.  Flat out better range and does more damage in melee than the gunfighter thanks to not being saddled with a knife.  The gunfighter's anti-jamming gimmick doesn't look very good by comparison, especially with the short 10" pistol range making getting caught in melee more likely.  At the very least there's not much difference in play style between the two soldier types, which seems a wasted opportunity. 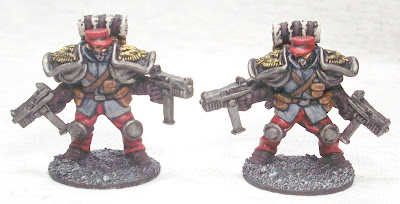 So, how would I change the gunfighter to give it a more distinct style and better utility?  I'd re-word the Two-gun Fighter trait as follows:
Two-gun Fighter:  While this figure is carrying two or more unjammed pistols, when making a Shooting attack it may opt to either gain a +1 Damage bonus or make two Shooting attacks at two separate targets.  Note that when splitting fire there's no limitation on distance between the targets, unlike the similar rule for Rapid-Fire weapons.  Additionally, this model's Shooting attacks never have the Hasty Shot modifier applied to them.
With focused fire the gunfighter is now on par with a shotgunner and actually slightly better than a rapid-fire (the higher Shoot is better than the higher Dam bonus of a focus-firing gunner) for raw damage.  With split fire, gunfighters would have more options and higher (but more dispersed) damage potential than a shotgunner, and better ability to hit spread-out targets than the rapid-fire gunner (but less damage potential when the gunner is using its move + action to fire full auto).  The ability to move before attacking without suffering the Hasty Shot mod makes the Gunfighter much more mobile than either and helps give them an edge on a shotgun-sniper when the latter has to move to get into range. 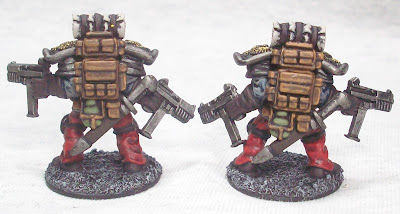