Simple but effective non-stacking ranged attack buff that can be applied to anyone but a highly-experienced officer.  Can be stripped off by Cancel Power.  Likely to be a go-to choice for when you're not sure what power to use but want the 3" extra movement more than you want to take an attack action. 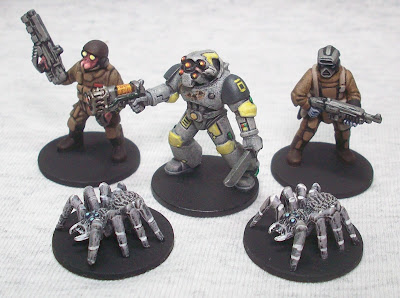 Moderate difficulty and moderate strain power that doubles the crit chance of the user's shooting attacks for the rest of the game.  Also prevents weapon jams.  Narrow focus but if you're building an officer for ranged combat rather than buffing, melee, or battlefield manipulation it's a good one, especially if you gear up with a heavy weapon.  Every chance you miss to shoot with your Crack Shot model is wasted potential, so getting the most out of it is really going to hurt your XP earnings for using powers.

Very difficult to activate post-game power that lets you recruit a robotic crewman for free.  Injury results occur before power use so you can see what soldiers you've lost before building a new robot, and you can fire a soldier at any time to make room for a robot instead.  These are permanent crew, not temporary, and the end effect is that you wind up saving about 50-100 creds every time this power works.  If you really want to lean into this power, take Mystic Trance to attempt to use CR both before and after each game.  Also benefits from one of the ship upgrades, but only for one user at a time.

Strong medium-ranged shooting attack that costs modest strain.  Uniquely capable of hitting the exact target you want when fired into melee, and very strong against robots.  Harder to use when wearing armor, although other effects that increase your Armor stat don't affect the activation number.  Using this regularly calls for some kind of healing power to manage strain damage. 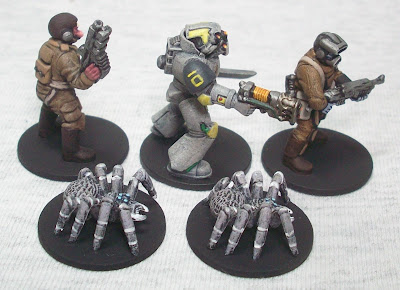 Simple, strong and versatile data loot manipulation power with modest strain cost.  Very good at getting the loot past interceptors, and can easily win games for you.

Difficult, highly strenuous power that can move unattended open data loot and steal carried data from enemy loot haulers.  Somewhat unreliable for the latter role, but incredibly frustrating when it does work.  Another Tekker trick that can win games for you.

Medium ranged high-strain power that breaks a selected enemy weapon.  Brutally effective against some soldier types and irritating against almost anyone.  Currently the only reason that Indestructible weapons are highly desirable when you can get them.

Trades modest strain to summon a drone (which should have the Robot attribute added, per the errata) from the Creature bestiary as a temporary crew member.  While fragile and bad at fighting, drones are decent loot haulers and more importantly, they let their summoner use many powers as though they were standing at the drone's location.  You should review the Flying attribute rules when taking this power, as well as looking at potential combos with other powers that could benefit from channeling at a distance, such as Fling or Target Lock. 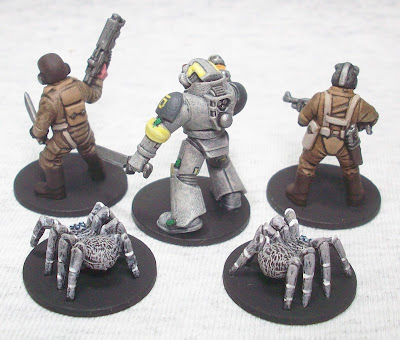 Versatile but strenuous power that either forces a robot to take a very high-TN test or skip its next activation entirely, or causes all guns carried by a non-robot model to jam and suffer a damage debuff when the jams are cleared.  Remarkably potent when used wisely, but beware of Cancel Power ending its effects instantly.  The NPC creature robot you'd most like to use this on is, predictably, immune to the power.

Gives a small non-stacking damage buffer against shooting attacks to the user.  Compared to other healing and damage prevention tricks this one has the advantage of being fairly easy to use, not requiring you to skimp on armor, and being proactive rather than reactive since the buff can be applied before taking damage rather than healing it afterward.  Just watch out for non-shooting damage which bypasses the power.

Easy to activate but mildly strenuous, this power gives you options for movement and stun shenanigans on both friendly and enemy figures.  Noteworthy for being able to move figures carrying loot counters without trouble - but weirdly, not unattended loot.  Very nasty when used at an elevation where falling damage becomes a factor.

Grants a non-stacking one-use reroll to attack rolls and stat tests made by the user.  Quite good given the high variability of d20 rolls, but let down a bit by the fact you can't use it defensively against shooting and its fairly high activation number.

Post-game power that gives a sizable bonus to the sale value of any one item you put on the market.  Quite a solid money-maker, although like all out-of-game powers you can't exert to activate it.