Pre-game or contact range power that lets one robot always be eligible to activate with the user in the appropriate officer phase.  Usual limit of three soldiers per officer applies.  Quite useful for letting a distant loot hauler or backfield shooter activate before the soldier phase.  Gains a bonus to activate pre-game from the same ship upgrade that benefits Create Robot and Re-wire Robot.  Combo with Command to let you activate with two distant soldiers at a time, and with Drone to let you more easily shift Remote Guidance to another robot in-game. 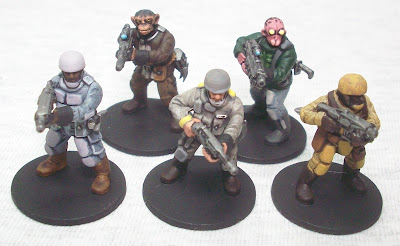 This is the Heal power only for robots.  Slightly less useful overall since you can't heal living models with it (most importantly your officers) and robots are never wounded so they need healing a bit less than squishy organic types.  On the plus side the activation number isn't affected by armor, so feel free to suit up.

Fantastically versatile power that lets the user gain one of a menu of useful attributes at a time.  You can use it both pre-game (with the usual "no exertion" restriction) to start with an attribute and during the game to gain a new attribute if circumstances call for it.  A real toolbox power that will almost always help at some point during the game.

Very difficult pre-game power that lets you slightly tweak certain stats of a robot soldier.  The change is permanent and can only be done once per robot.  Gains a benefit from the same ship upgrade that Create Robot and Remote Guidance do.  Pretty good for any robot when it works, although I question whether you'd ever want to improve the Armor stat instead of Fight.  Be a more viable option if Armor got a larger bonus.

Modest TN but penalized by armor.  The next time the target model is caught under a grenade or flamer template that would generate an attack (eg frag grenades or the Psionic Fire power, but not a smoke grenade) they move the minimum distance so that they're no longer under the template.  This movement can't take you into or out of combat, which is limiting but this is still a hard counter to people using a lot of frag grenades and/flamethrowers.

Simple, mildly strenuous power that grants a huge bonus to the next initiative roll, which only affects who becomes Primary Player, not any scenario effects based off the rolls.  Can't be stacked. 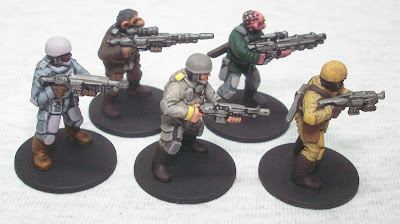 Simple, mildly strenuous power that lets the user ignore movement penalties for physical loot tokens and unlocks one loot marker of either type within 1" as long as there are no enemies nearby.  Someone still needs to pick up the unlocked loot, though.

Difficult out-of-game power that rewards you with extra XP for killing uncontrolled creatures during a game, which don't count toward the usual 300 XP cap.  Held back a bit by only getting one chance to activate it each game (a common problem with all such powers) and because not all scenarios see enough uncontrolled creatures to make this really mean much.  Probably at its best in solo or co-op games, where the other player isn't poaching your kills or getting the edge on you while you're hunting NPCs.  Obviously works better in combination with Beast Call, although it's not the most reliable trick.

Difficult, somewhat unreliable, and mildly strenuous power that grants a small movement effect and forces the target to drop any loot they have.  Not great if you want to use it on friendly models but extremely nasty against enemy loot haulers.  Potential game-winner, but it does suffer from armor penalties to activation that will make it absurdly difficult to use for armored officers.

Very strong and easy to use debuff to a model's shooting defense.  Doesn't stack but can be in place on multiple targets at once.  Will often result in more overall damage than actually attacking yourself even when you're sporting a +6 Shoot stat.  Can be stripped by Cancel Power.

Mildly strenuous power that grants an immediate shot with a grenade or launcher that automatically lands on target regardless of line of sight.  Can be fired from the user or another model in contact during a group activation, and the latter doesn't even count it as an action.  Extremely dangerous to bunched up enemies, and combos well with using a drone to apply the effect to a backfield grenadier. 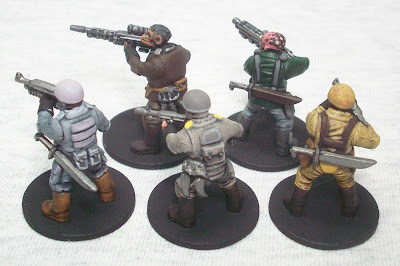 Difficult but versatile power that applies one of a menu of stat bonuses to the user.  Only one bonus can be on at a time but you can change it by using the power again.  Much like Re-wire robot I question why you'd ever choose to improve Armor rather than Fight with the rules as written.

Mildly strenuous power that grants the user a very potent melee weapon, on par with the best in the game.  If you want to murder people in close combat this is a great power, but consider whether spending your officer actions of brawling is the best action economy.

Difficult pre-game power that grants any two crew models poisoned attacks for the game.  Pretty good most of the time but weak if you have to face a lot of robots, other immune creatures, or even just someone with a lot of medikits to cancel the poison effects.  As with all pre-game powers you can't exert to activate this.

Mildly strenuous medium range movement shenanigans power.  Only works on friendly crew and has line of sight restrictions that powers like Pull and Lift lack, and it forces loot drops so not much use for your haulers.  Doesn't suffer from the armor penalties most movement powers do, which is arguably its best selling point.

Moderate difficulty out-of-game power that lets you roll twice for one physical loot and choose the result you prefer.  As written can't be used successfully more than once per game no matter how much loot you have.

Turns a hand weapon you're carrying into a lightsaber.  Extremely strong melee weapon that gives a huge defensive bonus against shooting attacks from many weapons.  Defense buff doesn't stack with cover mods but it's so good you can stand in the open without losing much.  Turns off if you're ever stunned.  Limits you to using 1-slot weapons while the power is active so leave your flamethrower at home.  Significantly, there's no activation penalty for wearing armor with this power, because Darth Vader, that's why.  Stacks well with the shooting defense buff from the Camouflage power.

Difficult, mildly strenuous power that creates a wall which blocks movement (including climbing) and shooting but not line of sight.  Grenade weapons can arc shots over it, and any shot at the wall itself has a small chance to end the power.  You can have multiple walls in play at once, which is some serious battlefield manipulation.  Likely to win games by blocking (or shielding) loot haulers on both crews.  Weirdly immune to Cancel Power, which seems like a mistake design-wise.

Modest difficulty out-of-game power that turns one basic ranged weapon into the equivalent of a pretty good Advanced Weapon for a game.  Doesn't have to be a weapon the user is carrying, so it functions a bit like an improved version of the Weapons Locker ship upgrade - and could presumably be combined with it, since Damage bonus effects normally stack with each other.  The reasonable activation number makes it worth thinking about for non-Hunters as well.