This is the gold standard of healing powers in terms of versatility and potency, but it comes with the drawback of penalizing you for wearing armor.  Still well worth considering even for non-Mystics unless you've gone crazy with the number of robot soldiers you're using.  This is one of many powers that combines well with Drone, which can let you extend your range enormously. 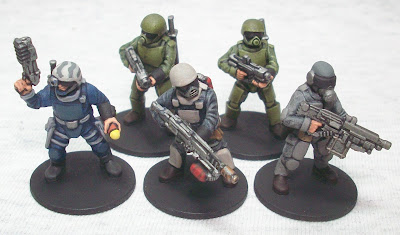 Creates line of sight blocking terrain that can be moved through in exchange for modest strain and a small chance of the power expiring each turn.  You can have as many walls in play as you like, which makes this a pretty hard counter for crews relying on conventional shooting to do damage.  Beware of grenades and fire coming from elevated positions.

Difficult and mildly strenuous power that prevents wound penalties and allows you to choose whether to accept Stun results or not each time you suffer one.  Restructure Body can duplicate the first half of this power more easily as well as being much more versatile, but the option to choose between hitting the dirt (with the defensive benefits it grants) or ignoring Stun is unique and quite potent.

Moderate difficulty out-of-game power that lets you sell a single piece of Info worth 100cr or more or a Secret without crossing it off your crew sheet.  This lets you sell it again next game but the value drops each time you do this.  At most it'll earn an extra 150 credits over three games, but you can use Info for 20 XP or a Secret to try for a specific item in a fight no matter what its current value is, so you'll often sell the same data a time or two and then use the secondary function rather than taking the last 50cr.  Can be used by both officers if you have at least two data lots.

Moderate difficulty power that can either grant a Fight bonus for the rest of the game or instantly end a Stun with no penalties on any model in line of sight.  Calling this good is an understatement, and its made even better because (unlike the similar Coordinated Fire power) you can use it on any model, not just your own crew.  Feel free to buff a dangerous uncontrolled model near your opponent, or clear the Stun on one that your opponent expected to only be getting one action on its turn.

Difficult out-of-game power that just plain earns you a modest amount of credits.  Might actually be worth improving the activation number to make the extra income more reliable, but those are advances you won't be applying to powers used on the tabletop and you won't be earning XP from this power. 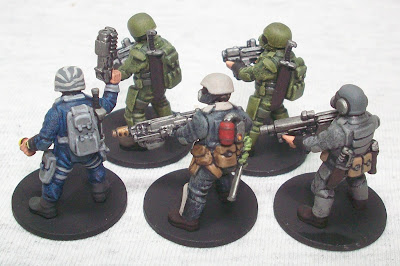 Self-healing power that discourages wearing armor, a recurring theme with Mystic and Psionic powers.  Requires a living target who may resist the effect to cancel both the damage they take and prevent you from healing.  Can be used on allies in a pinch, but they won't be working for you afterward.  For medic duties Healing is stronger, more reliable and has much better target options, but LL lets you deal damage and heal yourself in a single action.

Strong movement shenanigans for friendly crew but penalizes user for wearing armor and models moved with this power can't take actions afterward.  This makes it somewhat less useful for speeding up loot haulers outside of combined activations or Drone tricks.  Weirdly better for first mates than for a captain, since you can ignore the "no action" penalty on figures that have already activated that turn and mates go after the Captain Phase.

Pre-game power that lets you use another power pre-game just before the first turn.  This has a lot of potential combos, although you can't affect enemies or target points on the table with the second power.  At its most basic you can use it to put up a buff on a friendly model (including the user), but you can also do things like summoning a Drone, using Create Robot (although you'd need to leave a crew slot open to do so and it still wouldn't appear in this game), or using a movement power on friendly crew.  Unique in that one of the ship upgrades can be taken twice to let both your officers gain a large bonus to use this power.  As always with out-of-game powers, remember that neither this power nor the one it may enable can use exertion to activate.

Simple power that makes the user's pistol(s) indestructible, prevents them from jamming for any reason, and lets them crit on 19-20.  Cancelled if you get stunned, which is a big drawback for a combat officer.  Much less versatile than the Crack Shot power but easier to use and doesn't strain the user.

Self-only buff that greatly increases the damage of your next shooting attack with some weapon types at the cost of modest strain.  Stacks with other damage bonuses but not itself, and fizzles if you miss your next shot.  The extra damage is meaningful when it works, but the requirement to use this as its own action rather than it granting an immediate shot makes it a fairly inefficient way to use an officer action.

Easy to activate power that gives the user two dice on their next d20 roll, taking their choice of either result.  Penalized by armor like many "magic/psionic" powers. 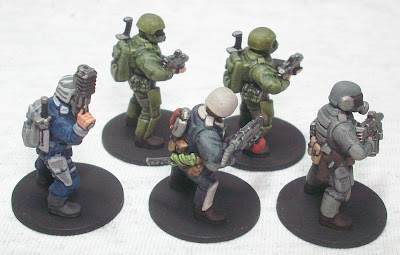 Super-flamethrower attack with minor strain cost and the usual activation penalty for the user wearing armor while using "magic' powers.  Remarkably brutal against bunched-up soldiers, in part because flamethrowers are darned good to start with.  Obvious drawback is the short range of the flame templates, and thankfully it can't be channeled with the Drone power.

High-strain power that also suffers an armor penalty for activation but significantly reduces damage from the next shooting attack that deals any damage at all to whatever model you use this on.  Can be stripped off by Cancel Power.  Sometimes a real life-saver but hard to use repeatedly without healing powers to manage the strain costs.  More versatile and generally more powerful than the similar Energy Shield, and the two do stack with each other.

Difficult, modestly strenuous and somewhat unreliable but versatile movement shenanigans power that works particularly well for accelerating loot haulers.  Weirdly difficult to use on yourself if you've increased your Will stat - although amusingly, you could use a token from the Fortune power to reroll your resistance stat to try to fail.

Difficult, highly strenuous power that brings a dead non-robot friendly crew back to life adjacent to the user.  Text raises the question of whether all members of a crew counts as "soldiers" for this power or if you aren't able to raise a fallen officer.  Situationally pretty good either way when you can get it to work, although it benefits a lot from the crew having some healing effects to go with it.  Like many Mystic powers the user is penalized for wearing armor.

Personal movement trick that uniquely lets you leave combat and mitigates terrain effects at the cost of modest strain.  Best way to get out of an unfavorable melee combat situation.  Has some positional restrictions but becomes more versatile if you've been tagged with Antigravity Projection or have the right Restructure Body bonus beforehand.  Maddeningly out of alphabetical order in the powers listing, this appears on pg.114 after Restructure Body, a full page after where you'd expect it to be.

Of the various healing powers this is by far the easiest to use but lacks potency and target selection options.  Often a difficult choice between using this power or making an attack instead, although as always the 3" power move factors in to that decision.

Lets a friendly robot soldier make an immediate medium range shot with a solid attack bonus.  The shot doesn't use any of the robot's actual weapon rules and any robot is fair game, even ones without a ranged weapon like a Guard Dog or Mule.  Hell knows what that represents, maybe the power makes the batteries short and arc electricity into its target.  Killing someone with a Drone (which, again, should have the Robot attribute) this way is grounds for post-game celebration.