Stargrave is relatively light on powers that produce lingering effects on table compared to Frostgrave or Ghost Archipelago, but the two "wall" powers are really versatile tools to have available and see play a lot.  You could just mark them with a piece of string or an index card cut to a suitable size, but this is a miniatures game so I thought I'd do something more visually interesting and make up a pool of markers to indicate the endpoints of each wall as they're created.

Whether you're making Holographic Walls with an officer using the Tekker power to block line of sight for a few turns... 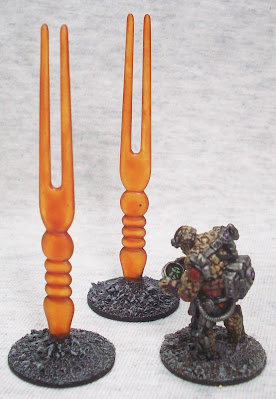 ...or producing Walls of Force to make invisible, impenetrable barriers of energy with the Psionic power... 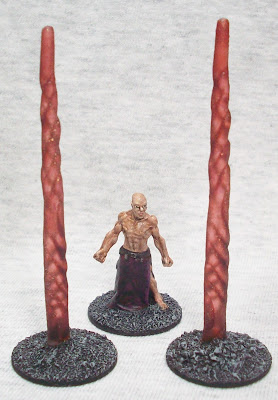 ...walls are surprisingly impactful, partly because at full size they cover quite a lot of table, making it easy to hide your figures from enemy fire and line of sight powers... 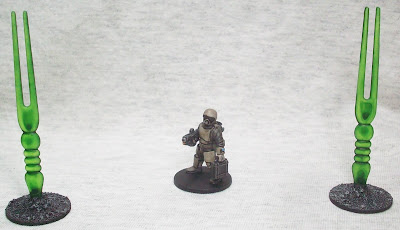 ...or simply blocking all movement through an area, forcing the enemy to go the long way around or waste their shooting trying to knock the force wall down while still letting you see the area beyond the wall for using your other powers...or grenades. 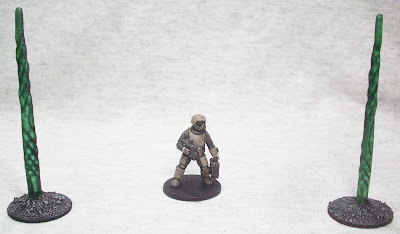 This should be enough for now.  You want to make them in easily identifiable pairs so each color/shape combo indicates a single wall.  The maximum length of any wall is 6" but you can opt to make them smaller by just positioning the markers closer together.  Maximum height is 3" and while you could make markers for shorter ones I couldn't quite work up the enthusiasm to do so.  Maybe I'll do some "shorties" in the future, but in the interim it's easy enough to stick a small note next to one of the wall's endpoint markers when you want to make (say) a 3/4" tall instant rampart for your troops to fire over. 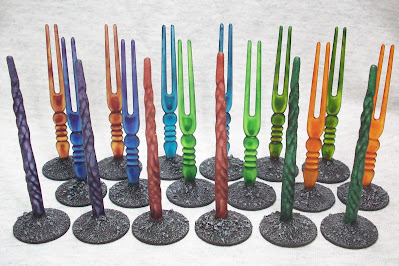 First up are the five Bug Swarms, which are resin figs from the old (and still not entirely fulfilled) Assimilation: Alien Host Kickstarter.  I use them as a seventh type of Bug from the Quarantine 37  supplement book, representing a mass of nearly-mindless larval forms.  Their main goal is to find and consume non-Bug biomass, but they can be directed to specific food sources by adult Bugs.  Their suggested stats:
Bug Larva Swarm
M     F     S     A     W     H
6    +2   +0     9     +0     18
Notes:  Bug, Expert Climber, Never Outnumbered, Vulnerable to Area Attacks
Never Outnumbered - Enemies never gain a supporting figure bonus against this model.
Vulnerable to Area Attacks - This model takes twice as much damage (after subtracting armor) from attacks using grenades, flamethrowers, and the Psionic Fire power
The two serpentine critters are gricks from WizKids plastic D&D range, which seems like a fine name for an alien critter so we'll just keep it.  They come in two sizes, the slightly smaller than man-sized grick and the much larger grick alpha.  In Stargrave they're opportunistic predators that are as at home in water as on land, armed with powerful grasping tentacles and a poisonous beak.  Suggested stats:
Grick
M     F     S     A     W     H
7    +1   +0    12    +1     10
Notes:  Amphibious, Animal, Ensnare, Toxic
Grick Alpha
M     F     S     A     W     H
8    +4   +0    12    +2     14
Notes:  Amphibious, Animal, Ensnare, Sharp Teeth, Toxic

The two hooved quadrupeds are leucrotta, again from WizKids.  In Stargrave I'm using them as aggressive hunters who are primarily interested in subduing suitable prey and dragging it off for a quick meal rather than sticking around to fight.  The creatures' internal organs are of use for manufacturing certain pharmaceuticals, which makes them profitable but dangerous hunting targets.   Their stats:
Leucrotta
M     F     S     A     W     H
6    +4   +0    10    +3     14
Notes:  Animal, Bounty (25cr), Counting Coup, Gnaw Your Bones, Never Stunned, Sharp Teeth
Gnaw Your Bones - Any model taken out of action by this model suffers a -2 modifier when rolling on the Survival Table after the game.
Gnaw Your Bones (and Counting Coup) apply to Robots despite their general inedibility.  Leucrotta aren't bright enough to differentiate between organic and mechanical prey until it's done a fair amount of chewing in search of the tasty bits.
Posted by Dick McGee at 4:04 PM