Gallery page of Orks from GW with some commentary on the models.

Warboss, his attack squig, and a squad of nobz. 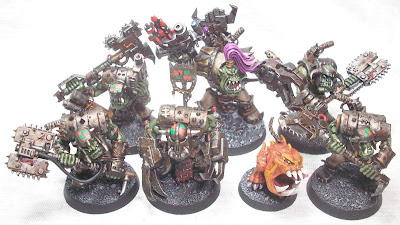 The smaller nobz are on the usual 32mm bases most ork infantry use, while the warboss gets a 50mm base.  The attack squig is sculpted so it can stand on the warboss base, but it looks ridiculously crowded and awkward that way so I've separated it off onto a 25mm base of its own. 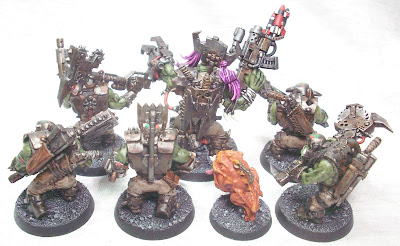 Mechanically, the squig is just a visual reminder that the boss has his pet along rather than a model with its own stats, which lets me opt to whether I really want to pay for the upgrade that adds the thing from game to game.  It's a bargain at 5 points but I can foresee times when I might skip on it, which would be difficult to do if the silly thing was permanently attached to the warboss model. 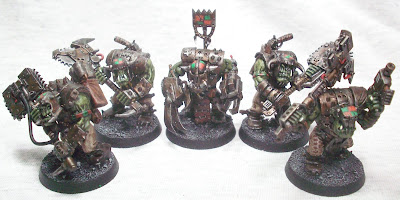 The nobz are one of GW's older ork kits.  They're pretty versatile models and give you a lot of spare parts and build options.  That's in direct contrast to the most of the recent wave of figures for the range, most of which are boringly monopose with zero built-in modularity, with some being literally push-fit models.  The company somehow manages to move forward and backward at the same time while steadily decreasing modeling quality and increasing prices.

The warboss is another example of a monopose fig with no innate build options, although the rules currently allow some weapon options and an optional attack squig as a pet.  I'll give it this much, it does fit together well with its joins nicely concealed from view. 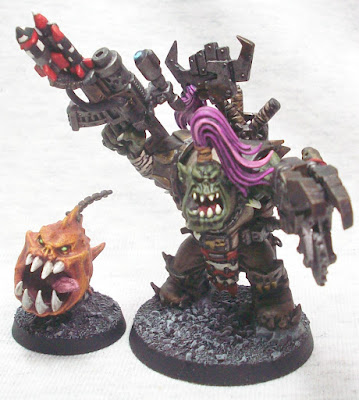 I've customized it a bit, modifying the already-elaborate backpack and adding a proper hair squig, because what kind of self-respecting warboss goes around bald? 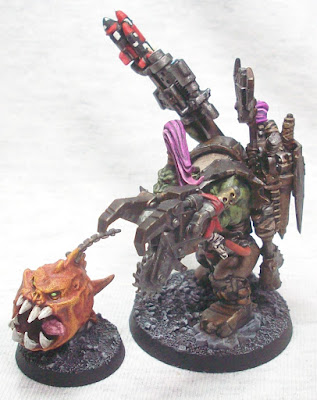 Assembled per directions the squig's trailing chain attaches to the warboss' chest, which looks phenomenally clumsy.  The idea is clearly carried forward from an older metal sculpt where the (smaller) attack squig is posed leaping off the boss' outstretched arm, kind of like a toothy falcon. 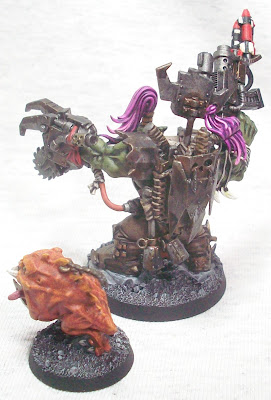 Unfortunately the sculptor who cribbed the idea for this sculpt didn't think about how dumb it looks to have a (much larger) squig on a chain that not only wouldn't let it get at enemies beyond 2' away, but would also constantly be getting in the way in a brawl.  Thankfully the model is made up of separate pieces and doesn't even have a join point on the warboss to cover up, so it's easy enough to stick on its own base instead. 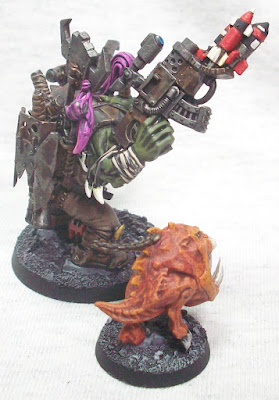 The trailing chain leash has been slightly repositioned for more dynamism, but otherwise I've left the squig as-is.  The current edition of 40K is very fond of turning things that were models on their own in previous editions (eg ammo runts, grot oilers and orderlies) into tabletop reminders with no real existence on the table, so I'm not concerned about this causing confusion.  It's not a bit of design philosophy abstraction I care for much, but if I ever play 9th edition instead of something better (like Rogue Trader or 2nd ed 40K) I guess I'll need to get used to it. 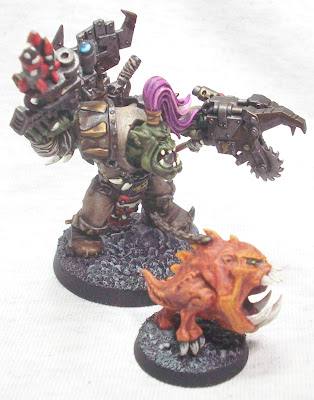 Ork Lootas from the mixed Burna/Loota kit.  This is a maximum sized unit under the current rules, and offer some decent long range (by ork standards) fire support.

These were a royal pain in the ass to paint, mostly because they really need to be done in sub-assemblies and then put together as a final stage.  Thankfully the weapon harness (which also includes the arms) fits cleanly over the torso when assembled, and you could probably attach the heads to the torso as well if you're careful about how they're positioned.

They also required a fair amount minor conversion work and careful part selection to ensure they're as irregular-looking as orks ought to be.  It's debatable how well I succeeded at that goal, but I wanted to stick to a broadly similar overall look so they wound up with a fairly limited color palette and a few key details painted uniformly.  Maybe too uniformly. 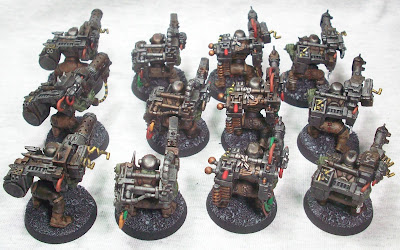 The plastic kit for these things isn't particularly helpful for that sort of thing, since half of each gun only mates properly with one specific other half so you wind up with loads of largely duplicate sculpts.  GW probably thinks we should be thankful the guns only have two pieces each, but they can kiss my ass and learn how to make properly modular figures the way North Star and Wargames Atlantic do. 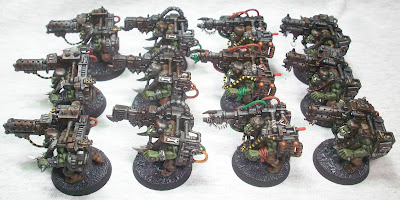 The real high point of my idiocy came with the "spanna" models.  You never used to be required to actually take any of these guys, but the 9th edition codex now saddles every unit with anywhere from one to three of them as sort-of leader types, despite them having the same stats as every other model while carrying worse weaponry. 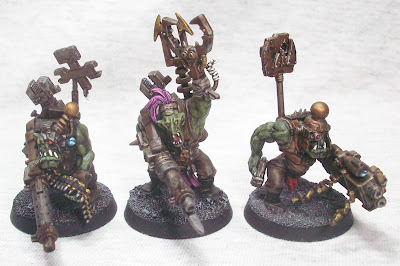 The kit only comes with a single spanna (still one too many if you ask me), which is more or less what the figure on the left looks like, although I think I used a different torso for him from the boyz kit. 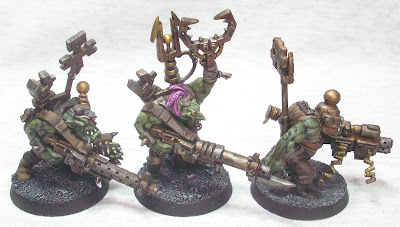 The other two figs got properly converted to give them some personality.  The middle gent got an heavily-modified backpack and a cyber-claw using parts from a runtherd, as well as a head from an OOP Warhammer Fantasy goblin.  I've got quite a few "pinhead" orks or "hobgrots" scattered around my forces with similar swaps. 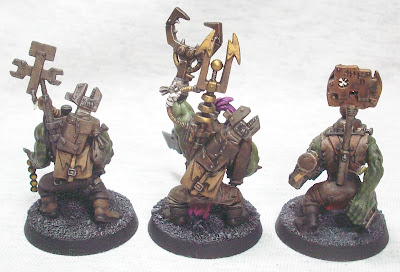 The figure on the right got more extensive conversions, with a kitbashed back banner, a proper "finky hat" and an elaborate big shoota/cyber-arm since I'd already used both variant sculpts of the stock big shoota.  I'm particularly fond of the ridiculously impractical scope on the fool thing.  Really sells that garbage ballistic skill orks have been saddled with since 3rd edition. 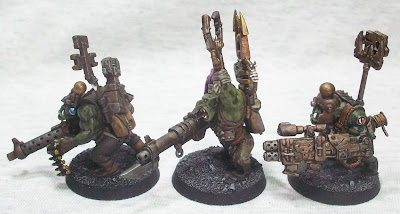 Even did a just-for-color ammo grot with a custom backpack full of more clips for his gun. 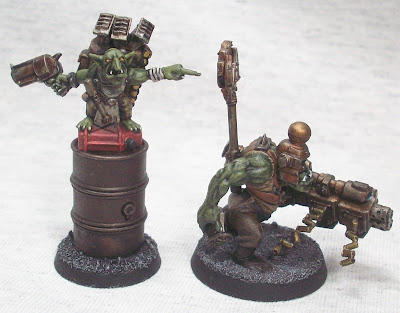 How the little guy gets around with all that on his back is less puzzling than how he manages a giant barrel of burna juice at the same time. 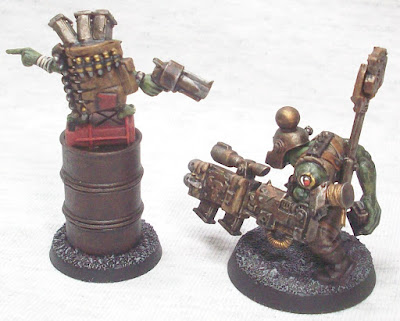 Of course, it also means he can double as a bomb squig proxy if need be.  Just point that grot blasta at the barrel and let rip. 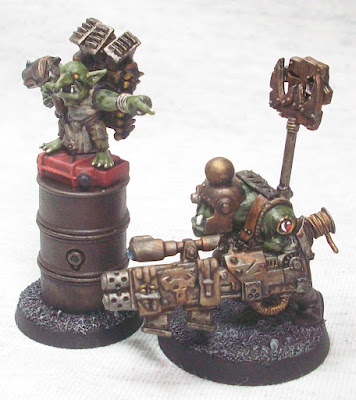 Maximum sized unit of Ork Burna Boyz.  This cleans up the last of the contents of the Loota/Burna mixed boxes I had on hand, although doing so required parts from two boxes of regular Boyz owing to GW's naked greed about how they package this stuff.  Calling their business practices predatory is like calling a starving wolf slightly peckish. 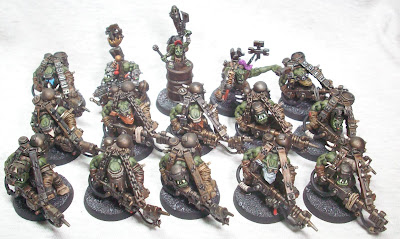 These are slightly less of a pain in the ass to assemble and paint than the Lootas half of the kit was, and they do offer a bit more variety for the Burna Boyz themselves.  Each weapon comes in two pieces, and unlike the Loota deffguns you can mix and match between them to your heart's content.

You could do conversion work to further improve figure variety, perhaps by clipping some of the various spikey bits, adding glyph plates, etc.

I went overboard again on making each of the three "spannas" that sort-of-lead the unit distinct from one another.  GW only makes a single sculpt for the fool things, and none of these are unmodified versions of that figure. 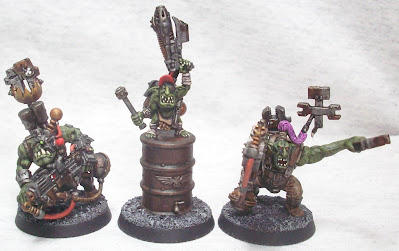 The figure on the left got a kitbashed back banner but the rest of him is pretty much a stock assembly of a spanna with kustom mega-blasta. 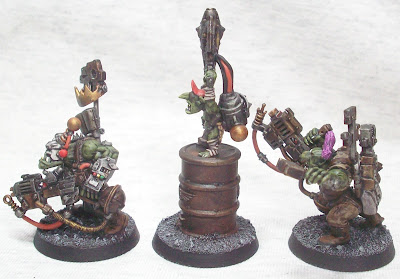 The figure on the right got the spanna backpack, a gun cribbed and modified from an Ork dreadnaught kit, a pinhead from an old Warhammer Fantasy Battles Goblin kit, and a left arm converted from one that was originally throwing a stikkbomb and a hammerhead from a Frostgrave sprue. 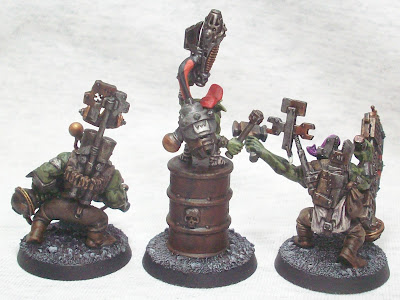 The middle figure is a bit of a private joke thrown together from a bunch of bits box pieces.  The weapon he's carrying is actually an old plastic Ork plasma gun from the late 80s, which is a reasonably close fit for a 9th edition kustom mega-blasta in terms of its mechanical effects.  I don't play with the kind of people who'd balk at a proxy like that, if you can even call such a thing a proxy. 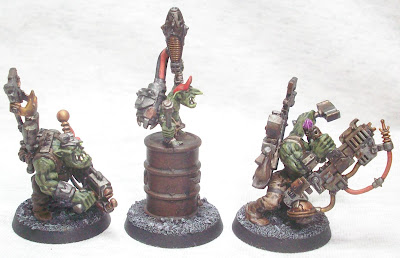 Minimum sized Tankbustas Mob, which is probably the best way to field them.  There's a terrible resin kit for these guys that saddles them with a a mix of anti-tank melee weapons, bomb squigs, and short-ranged rokkit pistols, all of which are pointless if you're using them for shooting vehicles to death at range like you ought to be.  These are extensively converted from boyz and bits from the Spanna and Nob frames and carry a proper all-rokkit launcha armament. 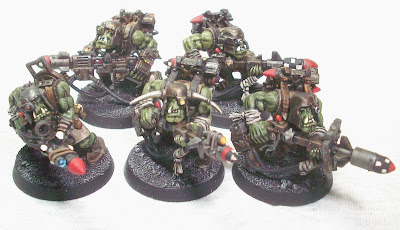 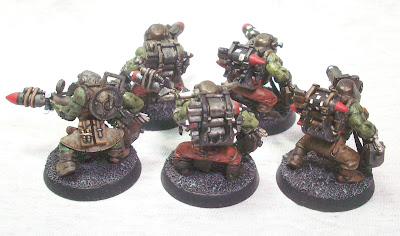 And a second mob of Tankbustas, again with extensive conversions.  They could be lumped into a single double-sized unit instead, but unless you're tight on force org slots or worried about giving up unit kill VPs I don't think I'd bother. 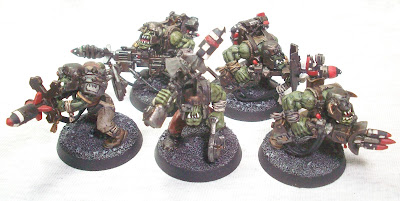 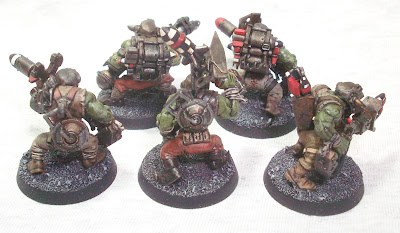