Brief post on what you need to assemble and paint for the Stargrave Dead or Alive solo module to use for the randomly-generated opposing non-player forces.  The rules can be downloaded here: 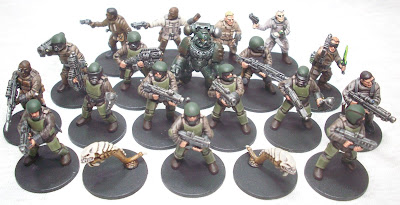 If you go through the five opposing gangs, you'll find that you need the following mix of models to fill all the possible combinations:
4 Recruits
2 Guard Dogs
2 Troopers
3 Sentries
2 Commandoes
1 Pathfinder
2 Snipers
1 Burner
1 Grenadier
1 Gunner
1 Armored Trooper
Total of 20 models, of which you'll use 8 to 10 in any one gang configuration.  The "spare" figs could be used as proxies for whatever Mark you're hunting as well as models arriving from the Unwanted Attention rule (which several scenario locations use), hostages, or your own soldiers if you wanted to experiment with different crews while playing solo or just haven't got around to painting your own yet. 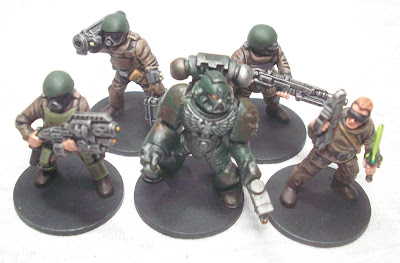 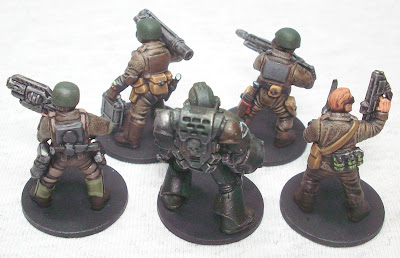 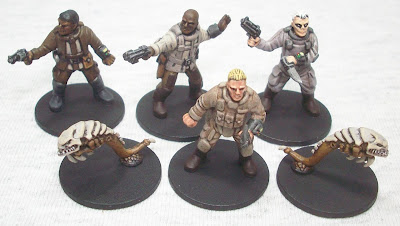 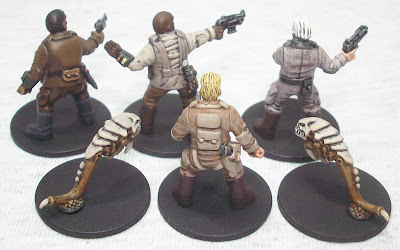 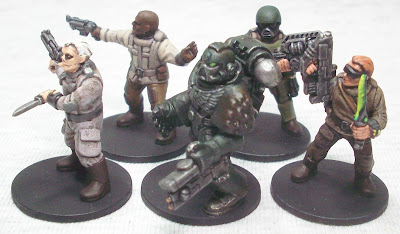 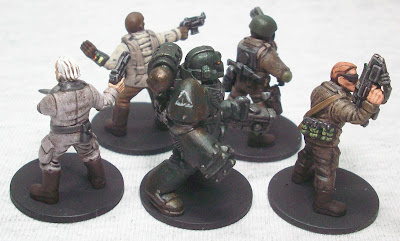 And a mixed shot of various figs from above.
Yes, the Armored Trooper is built from GW space marine parts spanning several generations and about 20 years worth of kits plus some extra parts as well.  His captain must be skimping on that upkeep cost, since the suit's rusty, dirty, has a replacement exhaust bulb on its backpack and a bad case of mechanical heterochromia on its optic sensors.
Most other figs are at least lightly customized with knives, axes and other bits added from other kits for something as WYSIWYG as possible.
And then there are the five unique Marks in the rules, the bosses you're hunting for their bounties.

Front, left to right:  Crystophon Marrs, Dogorin the Soulshark, Collen Preks
Rear, left to right:  Tamix Phage, Pondo-Pondo
I'm pretty happy with this lot, especially considering they were mostly the product of a deep dive in the bits box.  The two gals (Crystophon and Tamix) were by far the most work in terms of doing a Frankenstein on multiple different kits. 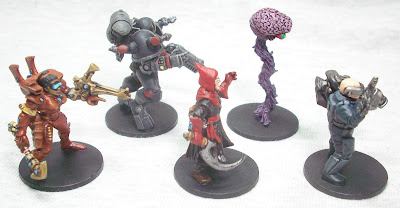 Think I like Collen best despite his relatively subdued paint scheme, he manages to evoke both Judge Dredd's Mean Machine Angel and Star Trek's Borg at the same time.  One assumes he has detachable cybernetics and alternate arm/hand choices for when he's not prepped for a fight. 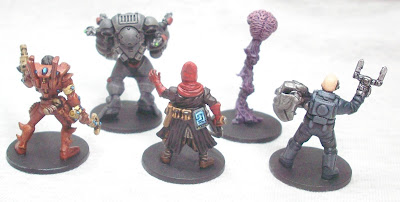 Dogorin would be right at home in McCullough's fantasy games, at least as long as he doesn't pull out his laser pistol.  Maybe there's some potential in a time-and-space crossover game?  Felstad is probably full of malfunctioning planar portals, and the Ghost Archipelago is dimensionally unstable in canon already. 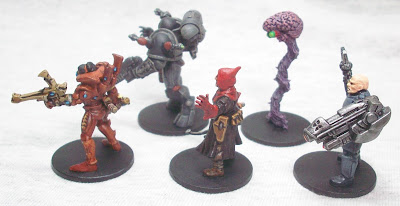 The only one whose game mechanics I'd flat-out change is Dogorin, who probably ought to have a built in, always active Void Blade (with the Fight bonus against some shooting attacks and bonus melee damage) or an AI chart that lets him throw his Dark Energy or Psionic Fire when in melee instead of waving his vanilla hand weapon around.  Either option would make him more of a challenge, although I prefer the former so he can be a proper Sith wannabe.
Posted by Dick McGee at 5:38 PM