Full Thrust: End of An Era, Painted the Last of My GZG Ships

Full Thrust was released thirty years ago in 1992, and I've spent the majority of that time (and my life) playing the game and loving it.  I've long since lost track of the exact number but it's likely that I've painted over a thousand Ground Zero Games starship minis, some for me, some for other people.  For decades now I've placed regular orders for their figures, either directly or (back in the day) through Geo-Hex, and it used to be a tradition to put together group orders with nearby friends a few times a year to help save on shipping costs.

Sadly, life changes have made that impossible for several years now and it seems unlikely that I'll ever be resuming the practice.  It's quite possible I'll never order from GZG again as things stand right now.  The models in this post are the very last starship minis I had left unpainted - or pieces of starships in the case of the spacewreck kitbash - and finally painting them up has felt like the end of an era for me.
Thought I'd dust off this unused blog to share my goodbyes with the surprising number of people who still look at the old posts here.  You can see all of my Full Thrust posts here, most of which feature GZG minis in one way or another. 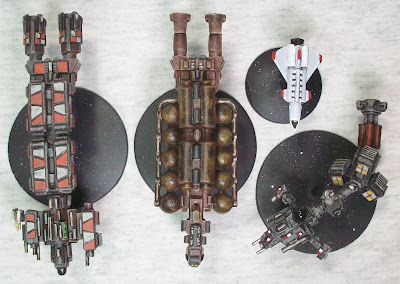 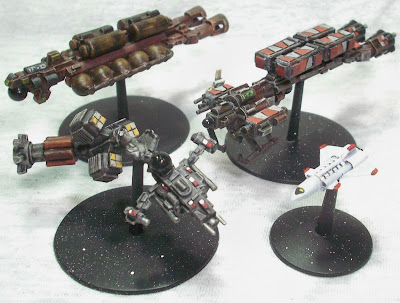 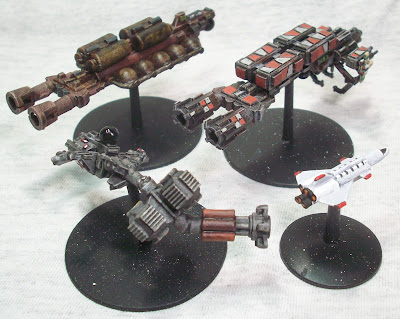 This rusted, obscenely stained and intolerably smelly excuse for a starship is a J. Peasmold-class waste recycling ship.  Officially she doesn't have a name, just an alpha-numeric designation, but her crew call the SRR-817P the Pirate's Booby Prize.  Other crews stuck in convoy with her have different, less polite nicknames for her.
Stinky or not, she's a nice model, very solid and with some real heft to her.  Comes seven pieces if I remember correctly - a large single hull, two dorsal tanks, two lateral tank arrays, and two engine modules.  This one's had custom built engines put one in place of the usual metal ones, which are identical to the ones on the salvage ship below.  She's just under 100mm long and mounted on a 50mm base with a metal flight post.
She's also the very last starship Jon gave me as part of his holiday sale deals, where you got a random-ish grab bag of free minis thrown in with your December order based on how much stuff you'd actually paid for.  It was always an exceptionally generous offer and gave you a little surprise to look forward to when you got your package. 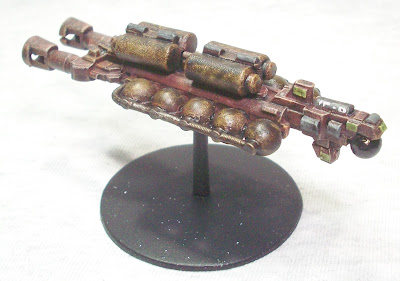 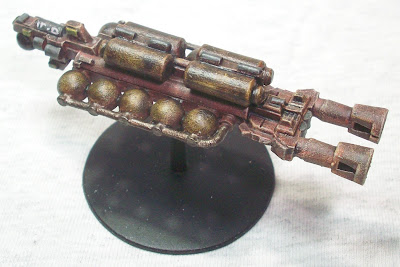 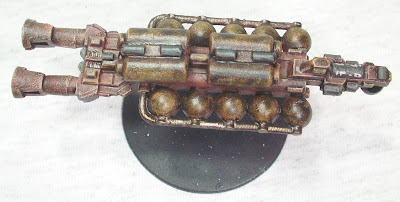 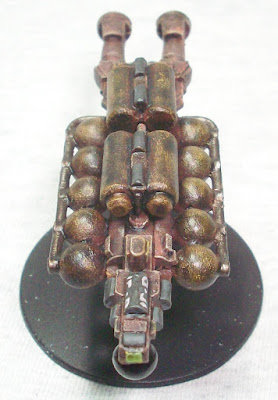 This little fellow is a Phoenix-class passenger spaceplane.  Neat little single piece casting, mounted on a 25mm base.
Would make a nice mini for a scenario where you're trying to get a VIP on or off a planet in the face of some light opposition - maybe some kind of run past orbital defense satellites or fighter squadrons? 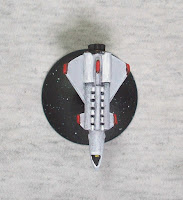 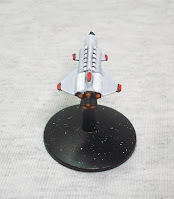 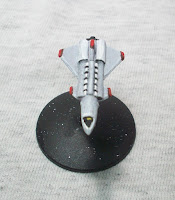 Lady Christina salvage/repair ship.  Believe it was an eight-piece model - main hull, prow, two sets of grappling arms, two dorsal utility modules, and two engines.  This has been converted a bit through the addition of an atmosphere-capable lander vessel (a GZG drome from the 15mm Stargrunt range) docked near the right bow.  The hull's also had a new hole bored for the metal flight post that's closer to the center of gravity, and an extra sensor ball (from the bits box) glued over the original hole.  A fairly large ship, about 100mm in length and mounted on a 50mm base. 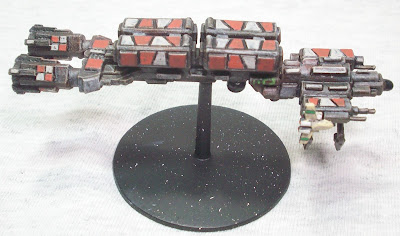 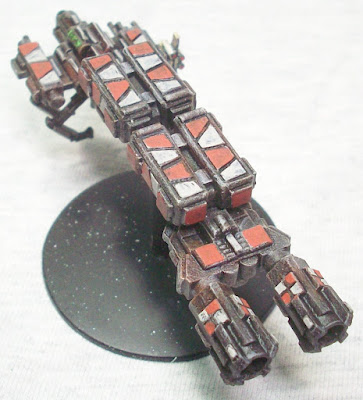 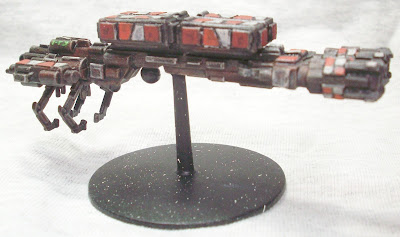 Can't very well have a salvage ship without something to salvage, and I wanted to use up teh last few fragment of ships I had on hand.  The bits used in this kitbash come from the modular heavy freighter kit, supplemented by some plastic tubing and cut styrene, all of which was suitably distressed.  There's a wire core at the center of the plastic, making the model good and sturdy. 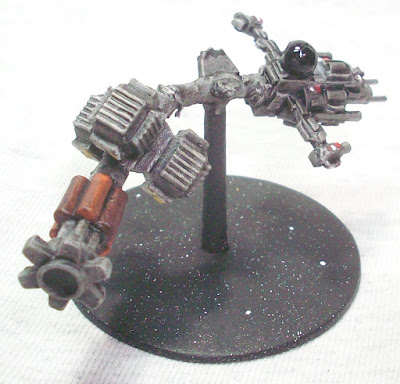 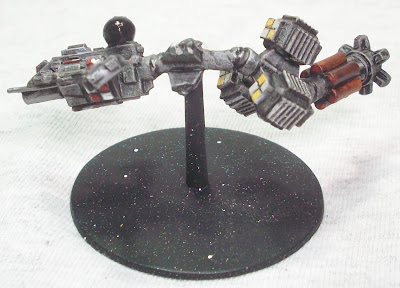 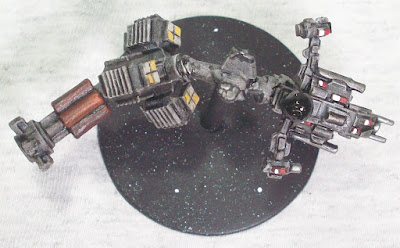 And here we have a salvage op in progress.  My headcanon says the hauler SS Voorheesville was attacked by commerce raiders, suffering a hit that breached the two of the three fuel pods she was carrying.  The emergency ejection systems jettisoned all three pods and saved her from the worst of the resulting explosion, but the ship's inertial compensators failed under full thrust.  This killed the crew and resulted in a massive structural failure before the ship-keeping pseudo-AI could cut the engines.
With her spine broken she isn't worth attempting to repair, but the drive module and remaining cargo load will be worth salvaging.  There's still some debate about whether recovering the operational avionics and computers of the command module is worth the effort.  Death by grav-comp failure is called "getting pasted" by spacer crews for a reason, and the salvage teams aren't keen on scrubbing up the resulting mess for some fairly basic civilian electronics. 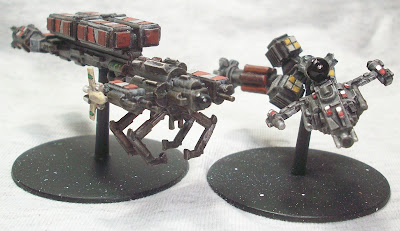