The existing damage control team rules in Full Thrust are sometimes criticized as ineffective or for slowing the game down for little purpose, although they are optional so you could just skip on using them altogether.  Personally I do feel like using them is a good idea, in large part because they give a potential "out" for the "lost all my FireCons (or drives, or screens, or whatever key system you like) on the first thresh check" thing, which can be really frustrating.  But I can see some justification for the mechanics of how they work, so in the spirit of Full Thrust, I'll suggest a variant - with some pictures of old fleets I've painted as eye candy. 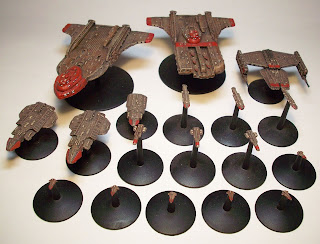 Faster damage control:  Instead of assigning DCTs to specific systems, roll 1d6 for each team in a single throw. For each six you roll, pick a single damaged system and fix it. After repairing systems with your sixes, for each one you rolled, pick a damaged system and mark it permanently destroyed - it can't be repaired during this game.  If you don't have enough systems damaged to use all your ones (or sixes) on then ignore the excess bad (or good) results - they don't "carry over" to future turns or anything like that.  You may opt to roll fewer than your maximum allowed dice, but don't blame me when they still come up all ones on you. 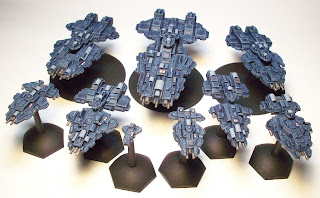 For example, a superdreadnought starts the damage control phase with 9 DCTs and the following damaged systems after being mauled by editorial mandate:
All 3 Fire Control Systems, 1 Screen generator, a Beam-3, and a Beam-1
She opts to roll her maximum 9d6 for her remaining DCTs, getting 6,6,5,5,4,2,2,1,1
She then picks two systems to repair using the six results - let's say a single Fire Control and the Screen Generator.  Then she has to choose two systems that are broken for the rest of the battle.  The Beam-1 is an easy choice, but what to lose next?  The Beam-3 is a major weapon and could be fixed later, but (since the Screen is now repaired) the only other choice is to lose a Fire Con.  The would only leave you with a maximum of two for the rest of the battle - maybe that's too big a risk of being blinded later?  Choices, choices.
This is about as complex a decision as this variant is likely to cause, and usually you'll have enough broken systems to make the choice of what systems to lose to any ones pretty obvious. 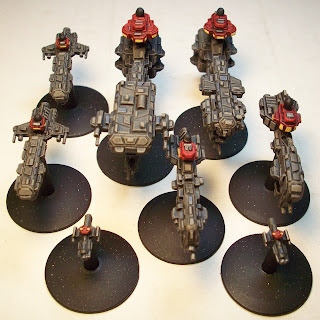 This is generally quite a bit faster to execute, especially with larger ships.  It definitely gets key systems back online more reliably as well as fixing systems more often, but has the added risk of bad rolls permanently breaking other systems.  The potential permanent loss of systems is a mechanical balance feature.  In terms of fluff, you can think of it as the DCTs triaging repairs, taking parts from less important and/or more broken systems to salvage the key stuff, as well as them physically checking damage reports ("The red light on the #3 katatron mount was just a severed power feed, but the starboard PD array is just plain gone, along with about 5 square meters of hull plating.") 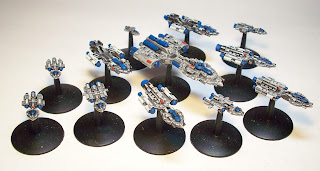 What?  I stuck the poor ESU with outdated starships in the photos?  Capitalist bias?  Enemy of the Proletariat?  Sheesh, fine.  Here, enjoy your modern ships. 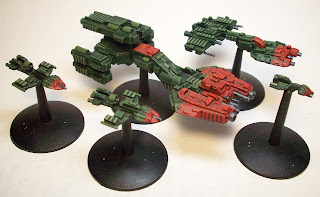