Today's post showcases one of Rebel Miniatures' Titan dropship/gunship models from a recent painting commission.  The figure's been out for quite a while now but I haven't seen it photographed much online, so I thought I'd signal boost a bit.  The Titan is sold here:
http://www.rebelminis.com/tidrkit.html 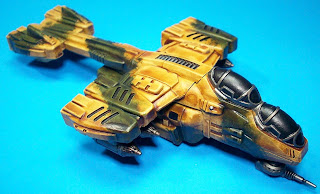 The model is a hybrid metal & resin kit, with the body in 4 resin pieces - the forward hull/cockpit, the troop carrying fuselage section, the wing assembly, and the tail assembly.  The chin turret and weapon pods are metal.  It also comes with a metal flight base and post.  I discovered that the flight post and its mounting hole are perfect fits for the "Hawk widget" pieces from TTC, which are mostly used in Dropfleet Commander and Dropzone Commander.  These things are terrific for flying models, as they let you easily dismount the mini for storage, transport, or showing that you've landed. 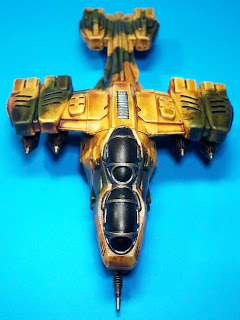 Assembly is mostly straightforward, with the resin parts having very broad contact surfaces and minimal gaps.  Despite its considerable size there's no real need to drill and pin the main body and it's very sturdy.

The weapon pods are shaped to fit brackets on the underwing, and simply glue snugly in place.  If you bought more pods (which I thought Rebel sold separately as well, but if so the store listing is eluding me) or just wanted to mount them differently, there are four more brackets, two on the top of the wings and one on each wingtip.  As you can see the brackets look fine even when empty, so you could leave off the pods if you wanted a more lightly armed dedicated dropship. 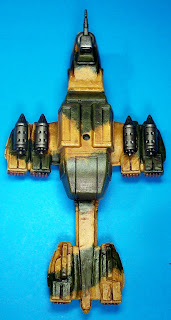 The chin gun is somewhat lacking for a decent mounting point, as the ball-and-socket on the model isn't sturdy enough when just glued in place.  After the third time the piece detached on me I broke down and did a quick drill-and-pin job on it, after which it was rock solid. 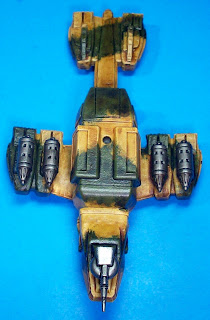 The only other minor quibble I have with the kit is that the thrusters on the wingtips came miscast, as I had to do some quick repairs with putty where the mold hadn't completely filled in.  It's not a hard fix and I don't know how common the problem is, but still worth mentioning.  Maybe they just need to use more pressure during the casting process to get the air bubbles out, or some modification of the mold itself.  Still, at $19.95 it's really quite a bargain.