Latest commission job, two 15mm fantasy armies from Ral Partha Europe's Demonworld range.  Took about two weeks from arrival to completion, a bit faster than usual despite  about of sciatica in the second week.  The customer is basing them to playtest a new set of rules he's working on, which will make shipping easier and less like to break in transit.
The minis themselves are absolutely top notch sculpts with incredible detail for their scale and decided Warhammer Fantasy aesthetic to them.  Only had one broken figure (a snapped halberd head) although many weapons needed careful straightening.  Almost no mold line cleanup required, and the larger models were simple and obvious to assemble.
My brief was to paint them as Dwarves and Drow ala D&D styles, so I stuck to fairly generic fantasy schemes on the short guys with a unifying touch of orange throughout.  The Drow got a purple-gray skin tone and an overall purple, gray and black color palette
Dwarves first, because I wear a beard.
These are the character/hero set and the Guards of the Gate troop unit. 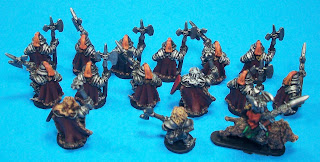 A couple of dozen Clansmen. 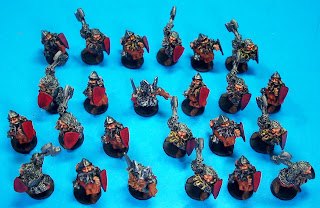 Arquebusiers in front, Heavy Clan Veterans in back. 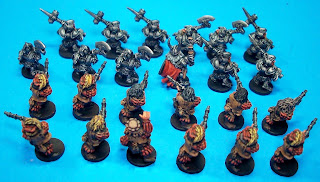 And a Dwarven Bat, a rather DaVincian aerial war machine.  It'll get a flight base later on, better to ship without. 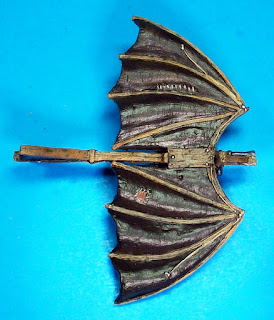 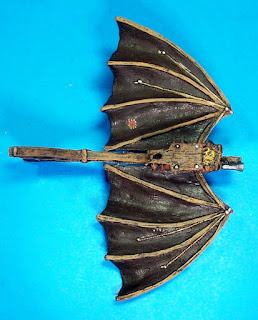 Very difficult to photograph the pilot.  He's got these cute little steampunk goggles on.

And on to the drow.  These are the Gor'Dragon, the Singing Death ballista with crew, and the War Wagon chariot with crew.  The chariot horses and the two "side" ballista crew are separate so they can be arranged on the eventual base as desired. 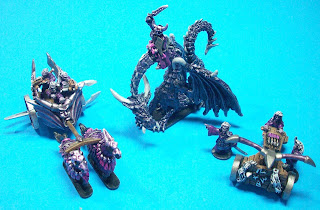 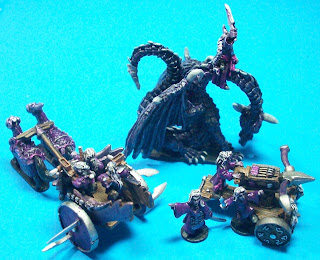 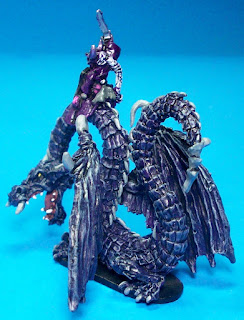 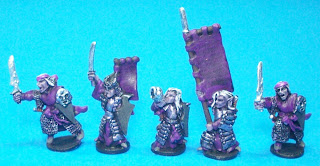 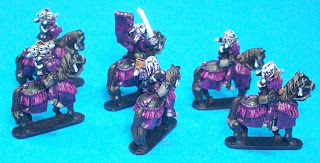 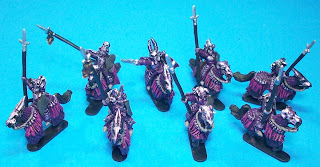 In total, 168 infantry, 15 cavalry, and 4 war machine/large monster figs with what I'd define as "tabletop ready" paint jobs.  Not too bad for two week's work, albeit a couple of days over original estimate for completion.  Now if the Canadian postal service doesn't feed the package to polar bears or something all should be golden.  :)