Just a quick post highlighting a recent purchase from Studio Bergstrom's Galactic Patrol range, inspired by the 1984 Lensmen anime.  This is the Britannia-class battlecruiser, the "hero ship" of the movie. 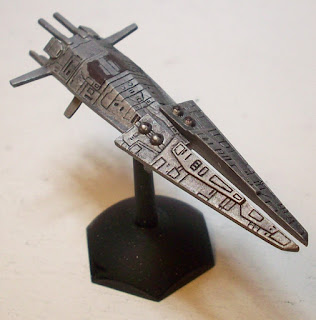 The model is about 3" long, cast in two pieces, the main hull and  asmaller engine cap at the rear that fits snugly and smoothly in place.  Quite a durable design despite all the little fins.﻿

The overall sculpting style reminds me of the Battlespace/Aerotech range from Iron Wind Metals, mostly due to the fins and hull detailing. 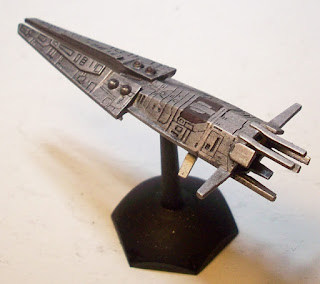 I've stuck with a fairly plain color scheme to honor the original inspiration, but you could obviously go wild with picking out all those small panels and details in different colors, striping the fins, etc. 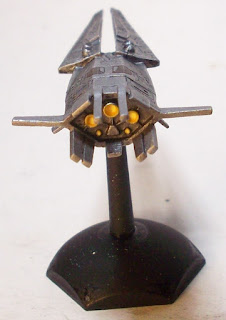 In Full Thrust terms I'd rate her as a fair-sized battlecruiser.  The anime (unlike the books) doesn't give the Britannia her signature experimental weapon, nor does she appear to be particularly undergunned for conventional combat.  The stats below use the playtest rules for the UNSC, including grasers and three-row hulls.  See here for details:  http://star-ranger.com/UNSCpreview.htm

Galactic Patrol battlecruisers are built for close-range fighting, using their high thrust to close rapidly at odd angles before lighting up their targets with massed fire from their broad-arc graser turrets.  They also carry a pulse torpedo launcher for added damage output and a bit of sniping potential.  If you want to experiment with some tech-sloshing, you could trade out the pulse torp for a Phalon plasma bolt launcher and an extra PDS mount.  Personally I think it's a more interesting design, but it breaks a whole bunch of Full Thrust's rules, loosely defined as they generally are.  For balance you might want to declare the ship's screens to be inactive on any turn it actually launches a bolt.
Britannia-class Battlecruiser (Bolt Variant)
Mass 104
NPV 394 / CPV 398
Thrust 6  q 3 q
FTL q
Screen-1 q
3 Fire Control Systems qqq
4 Point Defense Systems qqqq
4 Graser-1 (360 degree arcs) qqqq
1 Plasma Bolt Launcher-1 (180 degree front arc) q
30 Hull
qqqqpqqqqp
qqqqpqqqqp
qqqqpqqqqp
The Britannia miniature is available from Studio Bergstrom here:   https://studiobergstrom.com/index.php?route=product/category&path=92